id Software’s Doom Eternal shooter once against casts players as the Doom Slayer, the ultimate demon killer who will mow down the legions of hell in the manner that suits you best.

This sequel to Doom 2016 is light on story and heavy on action, allowing you to shoot lots of demons without having to suffer through a ton of story or cutscenes. You can adjust just how fast you want the combat to flow.

This time, your job starts with stopping the demons from taking over Earth. 60% of the planet has already been overrun by the time you get there. You can stop the invasion by locating the hell priests and bringing them down.

The game is pretty fined-grained when it comes to difficulty levels, so you can tune it to the level of action that you want. And it also offers as much story as you want to consume. You can stop and read as much as you want of the back story as you uncover little treasures along the path.

The game debuts on the consoles and PC on March 20, but the relatively bug-free preview that we saw showed the game is pretty near done. I loved the way it felt, as I never had to stop running or shooting, even when I had to pick up health, ammo, or armor.

To get through a three-hour preview of Doom Eternal, I dialed down the difficulty to the easiest level. From my previous preview, I knew it wouldn’t be easy to get through the fast-action shooter. 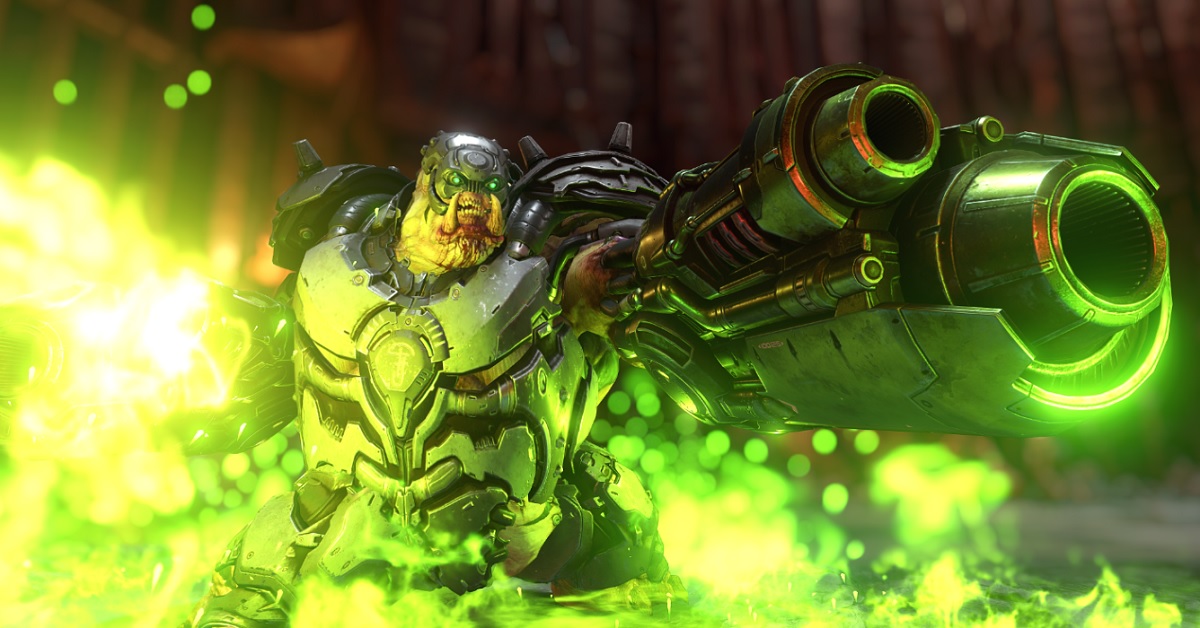 Above: Doom Eternal has plenty of green goo.

But as I was told by creative director Hugo Martin, the easier setting on Doom Eternal is basically the exact same experience you would have on the hardest setting, Nightmare. It just happens much faster on Nightmare.

I found that the enemies spawned behind me, after I killed a few in a corner to give myself a breather, knowing there were no more enemies coming from that direction. But I’d find I was getting hit from behind again.

When it comes to enemies, most of the ones I saw in the beginning were quite familiar, as the inspiration for the monsters came from the rich history of Doom itself, Martin said.

Since enemies spawn behind you, that motivates you to keep on running. But once you’re moving, you have to deal with the fact that a lot of enemies are shooting at you. These include Imps, Zombies, Cacodemons, Demons, Prowlers, Whiplashes, and Revenants. There are some new enemies such as the Doom Hunter, Marauder, and the Gladiator.

You can punch the Possessed Zombies and set them glowing. When an enemy is glowing, that means your next melee assault will get you a glory kill, which will yield more resources upon successful execution. You can also use a super-charged Blood Punch to bring down multiple enemies at a time.

The flying Cacodemon is hard to bring down, but you can pop a grenade in its mouth and perform a melee execution on it to bring it down quickly. Once these bigger enemies are out of the way, you can speed run through the rest. 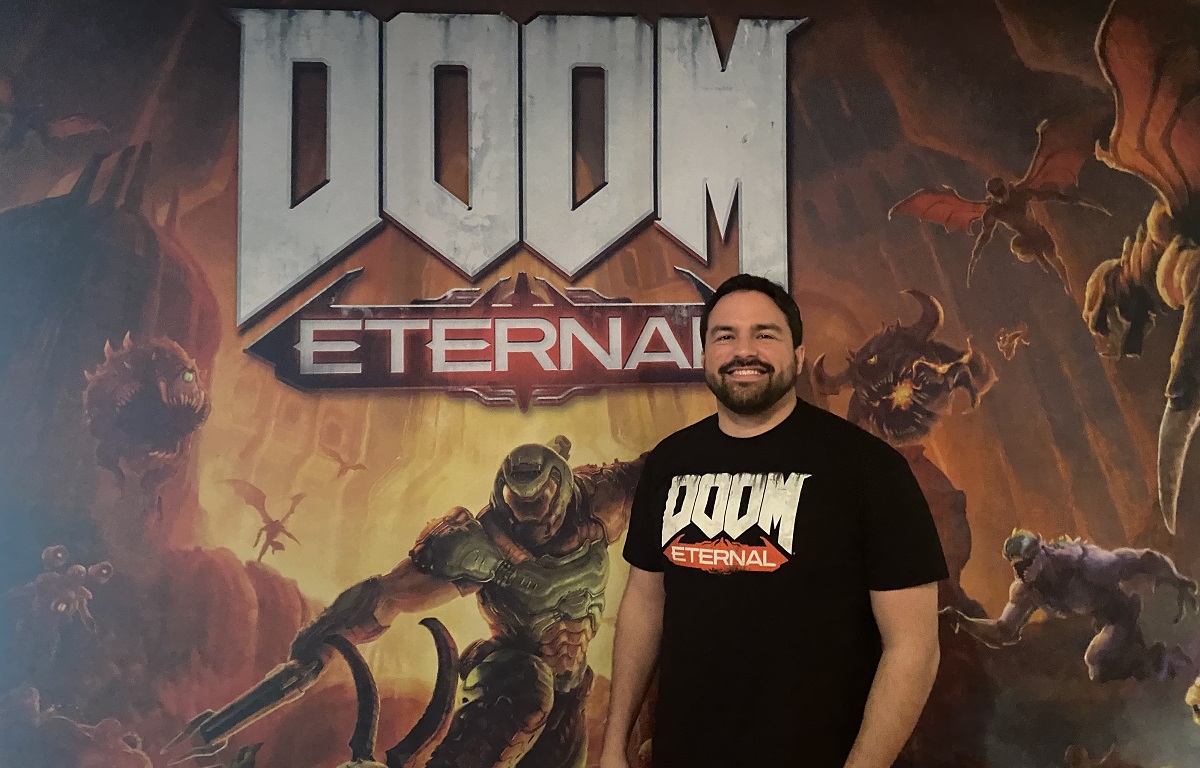 Above: Hugo Martin is creative director on Doom Eternal.

You can enlist new weapons to help you, such as the shoulder-mounted “flame belch” that burns through enemies who are in close combat. To get extra health, you perform Glory Kills. You use flame belch for armor, and you chainsaw demons to get more ammo. You can do all of this while in motion. The challenge is just remembering all this as it unfolds in real-time.

And you have many choices for upgrading your weapons, as if you were playing a role-playing game. You can add the Micro Missile mod, for instance, and fire five missiles at once to take out a crowd of enemies. A plasma rifle can quickly take out energy shields.

Once you solve some of these combat challenges, you go into puzzle-solving mode. You have to find a door to blast open or figure out how to get to an elevated spot. I was in the middle of doing this when I started recording the attached video, and I was quite puzzled for a while. 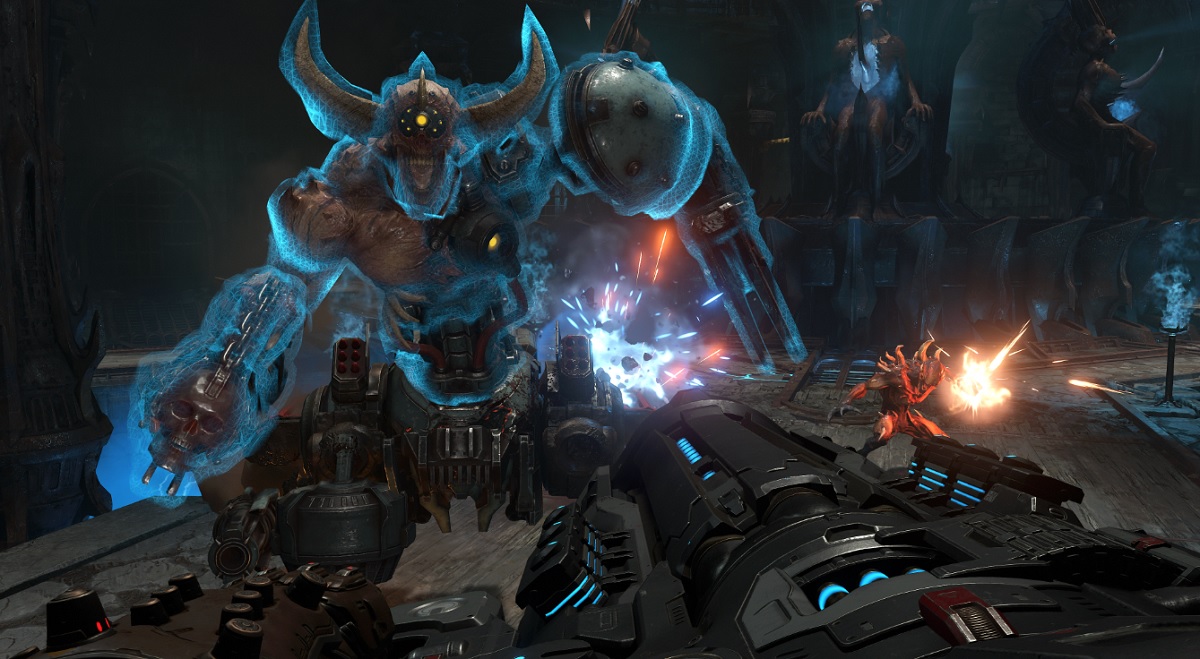 If there’s a potential flaw here, it is that this whole game runs the risk of being very mechanical and repetitive. You could potentially run into the same old enemies and fight them the same ways. But with each level, you’ll inevitably find a boss that will require you to change tactics, level up your weapons, and fight to the death. I had to make sure I used the “dash” button to escape the clutches of demons who were hurting me plenty.

In the early levels, I felt how the combat got progressively harder, as did the puzzles. And I suspect that the seasoned game designers at id have tuned this combat so that you can barely beat it. And if you can beat it, maybe you should turn the difficulty up one setting.

In other words, as Martin said, it should be quite replayable.

Finally, if you want to enjoy a good story, you’ll have a combination of fancy cutscenes to view, as well as logs to read as you pick up little treasures along the way. I found in Doom 2016 that reading these logs was quite fascinating.

I’m looking forward to this game when it debuts. We’ll see if it lives up to the notion of being the “best Doom eva.”