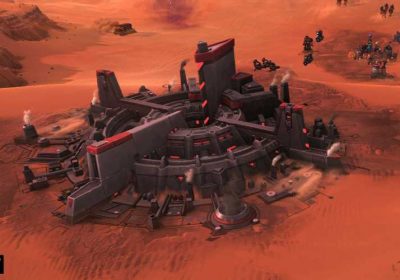 I’ll be the first to admit that my exposure to Dune as a series begins and ends with the trailer of the 2021 movie adaptation. I haven’t read the books, I don’t know who Duncan Idaho is, and I use spice to make food taste nice. Dune: Spice Wars intrigued me, however, as it looked like a compelling strategy game from the off.

It’s a 4X strategy game, which means you have a world that you need to eXplore, borders to eXpand, resources to eXploit, and rival factions to eXterminate. This is a classic sub-genre that most will know from the likes of Civilization, and Dune doesn’t do much to deviate from the formula. The action takes place on the planet Arrakis, with four competing factions vying for success, whether that be financially, militarily, or diplomatically. The standard features apply – you explore through the use of ornithopters, take over neutral settlements through force, and construct buildings that further enable your expansion and survival. The game starts you off with meagre beginnings, with just your capital and a single ornithopter to your name. Your first goal will be to find some spice and a nearby village to take over, as you can’t make money without spice, and you can’t build anything without villages. From there, you’re tasked with building spice extractors and balancing your various resources to keep settlements happy. You need to harvest water, build plascrete factories to satisfy your population's needs, and recruit forces of trained soldiers and village militias. It won’t be long until Fremen sietches or rival factions send raiding parties for you, and you’ll need to defend yourself or suffer heavy losses. From there, it’s more of the standard stuff – expand gradually, trade with your rivals, and decide how you want to win the game – and then immediately change tack when that grotesque Harkonnen guy decides to insult you and you build up an army to teach him a lesson.

Dune: Spice Wars separates its developments into four categories – statecraft, economy, military, and intelligence. Each of these centres on a specific playstyle that the game encourages, but investing in all four is necessary to excel at the game. While economic and military buildings and technologies are largely self-explanatory and intelligence is tied exclusively to a rudimentary espionage system, the game does some interesting things with statecraft. Statecraft is closely tied to the game’s Landsraad council mechanic; once a month, the council meets to vote on new resolutions – these are rules that will either affect the entire game or just one faction in particular. Voting on these is a great way to accrue advantages for yourself and impose disadvantages on your rivals, and you can take steps to improve your standing with the council to increase the number of votes that you’re allocated in order to sway elections. Alternatively, stockpile influence through deft trades and influence-generating buildings to make sure you can claim the best resolutions when they pop up. One of the ways you can win the game is through complete domination of the Landsraad council, and you’ll need some keen diplomatic prowess to accomplish this. That, or buying victory like any other politician would. The other ways to win the game are what you’d expect from a 4X game. You can win through domination – eliminating your rivals from the map through aggressive expansion or underhanded leader assassinations – or through accruing Hegemony. This is gained in a few different ways, mostly through playing the game normally, expanding borders and developing villages. Once a faction hits 50,000 Hegemony, that’s it – game over. It seems to be a failsafe to prevent games from going on too long, in the cases of diplomatic and militaristic strategies resulting in stalemates.

Rather notably for a 4X sandbox, games of Dune are pretty short, often ending around the three-to-four hour mark. This is by design, as there aren’t huge technology trees to research or a huge range of combat units to unlock. The game is balanced around maximising the few resources and options you start with, with only a few buildings and developments locked behind research. This leads to a well-balanced game that I don’t foresee getting as many balance patches as the likes of Civilization or Europa Universalis. It might be a turn-off for some if they like worlds that look immensely different every time they play, but I think this is a string in Dune’s bow – even at this early point, it’s a well-rounded, complete game and a satisfying experience.

At first glance, Dune: Spice Wars appears to be another generic 4X game given a lick of IP-coloured paint, but it’s evident that a lot of effort has been taken to entwine the game with its source material. One of the game’s main mechanics is the spice market, something fundamental to Dune as a series thanks to the resource’s use in intergalactic travel. In the game, you must harvest spice constantly to pay an Imperial tax on the stuff, and it’s also your primary source of income. Finding a nice balance between stockpiling spice and selling it is something you’ll have to work out quickly, and it feels very satisfying to notice that you have vast spice reserves just as the price skyrockets and you can spend a month raking in the dosh. However, the most noticeable mechanic lifted from the source material is undoubtedly the iconic sandworms that tunnel beneath the surface of Arrakis. In-game, they take the form of an ever-present threat to units and excavators who aren’t sheltered by a village, and it takes only a few seconds of distraction to end up witnessing your army being gulped down by one of these titanic pains. If there’s one criticism I could levy at the game, it would be that the sandworm warning notice needs to be a little more noticeable. It’s a neat reference that Dune fans will enjoy but there’s nothing more frustrating than scrolling towards a fight you thought you had in the bag only to find your army being gulped down by a bastard worm.

The four playable factions are also inextricably linked to the source material, as their disparate playstyles are heavily influenced by their behaviour and presence in the books. For example, House Atreides plays rather diplomatically, being unable to pillage neutral settlements. At the same time, House Harkonnen has no such qualms and rewards those who seek a more violent route to success. The factions are headed by – and assisted by – recognisable characters, which will surely add some enjoyment to fans of the series. Even I, a total newcomer, can appreciate those nice touches – even if I am a bit baffled by it all.

I like Dune: Spice Wars. It doesn’t do anything extraordinary with the genre, but it relates to its source material in a way that sets it apart from more generic offerings. The beautiful presentation and moderate game length make it a digestible, enjoyable experience for beginners and veterans alike. Now, if you’ll excuse me, I’m off to watch Timothée Chalamet travel to Idaho to buy paprika, or something.