Home » News » Dungeons & Dragons retcons one of its most problematic characters

Dungeons & Dragons retcons one of its most problematic characters 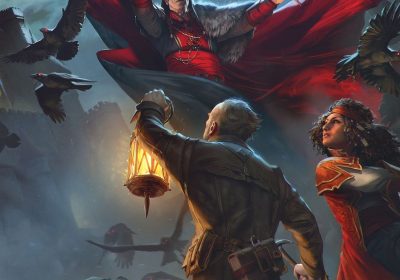 One of the most popular adventures in 5th edition Dungeons & Dragons, the gothic horror classic Curse of Strahd, is known for containing several harmful stereotypes. Players have bemoaned that fact since it was first published in 2016. As a result, Wizards of the Coast formally revised the original material with Curse of Strahd Revamped in 2020. But with its next product, Van Richten’s Guide to Ravenloft, the publisher is going a step further. The book fully retcons a key character from Curse of Strahd, and the result is something genuinely uplifting.

The character in question was named Ezmerelda D’Avenir; she was a skilled monster hunter with a tragic backstory. Wizards included her among the Vistani, a group of people in the game’s fiction that fans have often interpreted as an allegory for the Roma people. Curse of Strahd originally portrayed the Vistani according to real-life harmful stereotypes about Roma people, depicting them as inherently evil and untrustworthy; the Vistani were also aligned with the module’s villain, Strahd von Zarovich. Ezmerelda’s own backstory even alluded to Vistani participation in human trafficking. Wizards also gave her a prosthetic leg and called it her “secret,” making it something she actively hides from the world.

In 2020, amid the wide-ranging cultural movement that included the Black Lives Matter movement, Wizards formally apologized for these and other missteps in its materials and vowed to take action.

In 2020’s Curse of Strahd Revamped, Wizards fleshed out the Vistani and imbued them with a greater sense of free will. Ezmerelda’s prosthesis was no longer a dark secret that she hid from others, but an adaptation that doesn’t slow her down. Wizards also came out with new rules for dealing with the concept of race, which were later formalized in Tasha’s Cauldron of Everything.

Van Richten’s Guide to Ravenloft is the biggest, best D&D book of this generation

Those who open up Van Richten’s Guide on May 18 will find a very different version of the Vistani. They are described without the primitive veneer of superstition that formerly accompanied them. Their own magic is now clearly connected to the other forms of magic in the world of D&D. In addition, their culture is redefined as one steeped in tradition, but also one that looks with hopeful eyes toward its own future. While the Vistani keep their covered wagons and their nomadic lifestyle, their visitations across the many realms of the D&D multiverse are now celebrated, rather than greeted with near-universal suspicion. Most importantly, they are no longer subjugated by one of the game’s most powerful villains.

“A people unto themselves,” Van Richten’s Guide reads, “Vistani refuse to be captives of a single domain, the Mists, or any terror.”

The biggest transformation, however, comes for Ezmerelda herself. She is now cast as the victim of “her manipulative family, who posed as Vistani to prey upon travelers.” Ezmerelda chooses to join the Vistani, among whom she “traveled far but never found […] belonging.” She did eventually find her own agency, however, going so far as to take on a new name. In Van Richten’s Guide, she prefers to be called Ez.

Rather than a misguided loner, Ez is now a person searching for peace. She’s described as part of a band of adventurers led by her mentor, Rudolph van Richten. As hand-written letters indicate early in Van Richten’s Guide, it’s those adventurers who became her true family in the end; a loving, found family, one that she was able to choose for herself. Eventually, Ez and van Richten’s personalities clashed and a great misunderstanding drove their small fellowship apart. Now she wanders the multiverse fighting evil, searching for her family once again.

“Since then,” Van Richten’s Guide reads, “Ez has changed much, learning the ways of the Mists and replacing her leg with a splendid prosthetic after a werewolf attack. She hopes that her explorations and her old mentor’s wisdom eventually allow her to create a place that feels safe enough to call home.”

The opening pages of Van Richten’s Guide to Ravenloft tell the story of a loving, found family torn apart. The rest of the book gives players all the tools they need to maybe put it back together again.

For a character with such a sordid history, I was pleased to see these changes in Van Richten’s Guide to Ravenloft. Ez still gets a tragic backstory, still gets to be a skilled monster hunter and fearsome in her own right. But she’s no longer wrapped up in the racist caricature that the Vistani were originally written to be, and she has been gifted with far more agency than ever before.

It feels like Ez is now someone capable of overcoming evil in all its forms. She even gets to say it out loud with a quote in Van Richten’s Guide. “‘Evil that feeds on the innocent,’” Ez says, “‘is the worst of all evils and must be destroyed.’”

You can find Van Richten’s Guide to Ravenloft online at retailers like Amazon, at your friendly local game store, and through digital tools like D&D Beyond, Fantasy Grounds, and Roll20. Read our full review in Polygon’s tabletop section.