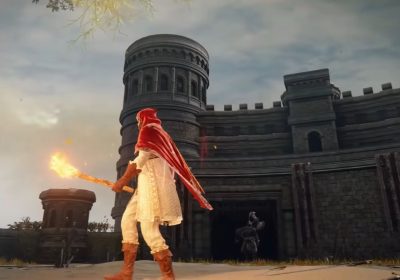 Elden Ring players may have noticed several large, circular structures in Leyndell, Caelid, and Limgrave. On the outside, they appear to have large stone columns and massive doors, but there’s no way to get inside. At least, not without mods. Dataminers have been able to get inside these areas and have determined they’re massive Roman-style colosseums, but those same dataminers weren’t able to tell whether they were cut content or merely unfinished DLC.

Now, thanks to modder Sekiro Dubi (via IGN), we’ve got a much better idea. These colosseum’s appear to be cut content that is mentioned in-game, but there’s no way for players to access these spaces in their current form.

Using a tool called DSMapStudio, Dubi was able to get inside the Leyndell Colosseum and re-enable two “dummy” enemies that were found in the game files. One is a Maliketh-like beast, while the other is a massive ax-wielding gladiator. Enabling these enemies causes them to go for each other's throats for quite some time as they both appear to have enormous health bars.

Dubi notes that the in-game Ritual Shield Talisman describes the colosseum’s as part of a “bygone era,” so it seems FromSoftware at least had the time to provide a lore-worthy reason why these colosseums aren’t accessible. But there’s more evidence that these colosseum’s were intended for use but shelved later in development. The Leyndell colosseum, for example, has a working site of grace (although it doesn’t have a name), and the front section of the map’s game files is tagged with “reception area.”

It’s possible that these colosseum’s were really intended to be part of Elden Ring’s PvP features, or it’s possible that they might be restored later in a future DLC. It’s all speculation at this point, but both FromSoftware and Bandai Namco have confirmed future support for Elden Ring that might include DLC.

Something that players are still asking for is a cooperative Elden Ring experience. A mod from YouTuber LukeYui showcases what Elden Ring would be like if a friend's death didn't immediately disconnect them from the host, allowing for a seamless multiplayer co-op campaign.