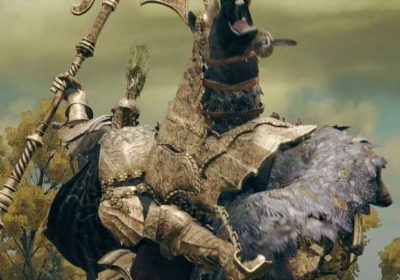 There's not really much in the way of safety when it comes to riding horses. I mean, maybe there is, but I've never ridden one, so I assume you just sit on a saddle and hope for the best. But Elden Ring's Tree Sentinels get a little bit more security, given that they're chained to their horse's armour. Okay, maybe that's extreme, but it works.

Not only that, but it seems that the chains magically bind the two together so that, whenever you hit the poor horse, the Sentinel takes a beating too. Think of it like a seatbelt that kills you if you get into a car crash – actually, I take back everything I said about good safety measures. The Land's Between is horrible for them.

Normally, when you break the posture of an enemy on horseback, they fall right off. The minibosses you find at night and the smaller enemies with their own Torrent-like steeds all fall back on their ass and we get to jump down and have an easier fight without awkwardly fumbling about, trying to joust with a dagger, but there's no such luck with the Tree Sentinel. If you stun them, they stay together, and it's baffled fans for a while now, but u/Groomgrim has put the pieces together.

Chaining yourself to a horse isn't ideal, but it's probably handy if you're in giant, heavy metal armour. Getting up while lugging that with you would no doubt be difficult, leaving you vulnerable to attacks, but it's a FromSoftware world where giants lug around pots of fire and a behemoth demigod uses gravity magic to sit on a tiny horse – there are workarounds. But maybe the lowly knights guarding these spots we find them in aren't so lucky as to have the same benefits.

However, it does raise a slightly disturbing – pretty gross – question: where do they go number two? Or even number one? Is this a Master Chief's armour situation where they piss into the suit itself and advanced futuristic tubing carries it out for them? Probably not, it's a fantasy world in disarray. They could have giant Tree Sentinel diapers blessed by Godfrey himself. Or, more likely, there's no answer. FromSoftware probably didn't consider the logistics of how the Tree Sentinels piss.

The likely answer is the magical chain can be unlocked and they just nip to the bushes nearby. But that's no fun. Anyway, if Elden Ring does get DLC down the road, maybe it can take a note from Oblivion and give us our own horse armour for Torrent, one that chains us to their back for a good ol' challenge run where we can't ever get off our horse. Or hell, what about someone playing Elden Ring while on a horse in real-life? That's a challenge for you.