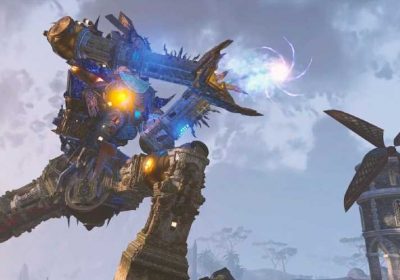 The Elder Scrolls Online has a pretty robust housing system, letting you personalise your homes so much that everyone's can be distinctly unique despite coming from the same base foundation. You can make a purely practical crafting getaway, a roleplaying abode, or a guild hall for your hundreds of members to party in.

Or you can bring Daggerfall's giant dwemer mech powered by the heart of a god – Numidium – to life.

That's what RyanwBoswell1991 did, but it's not just a giant statue. Its chest and arms light up gold and blue, it has movable hands, can bend its legs and fire off lasers, and even has the Heart of Lorkhan as an added bonus. If you're like me and your creativity extends to placing a bed or two and an armory, this is mindblowing.

Someone in a similar boat – who couldn't wrap their head around how you'd make something like this in vanilla ESO – asked how it was even possible. Boswell replied, "Well first things first you need to get a house ideally you want to get yourself a [pretty] big house. If [you're] lucky you might have found yourself caught up in an event that has given you one for free. Having a master crafter character is also a huge plus [- it] saves a lot of gold."

A big house and a big imagination with a toon that's built to craft and you're set. It might not turn out as good, but with a bit of practice, maybe you'll be able to build your own Numidium. Or you could forgo TES altogether and make Mechagodzilla. Maybe the two could duke it out on the battlefield, eh?

If you don't know, Numidium was the focal point of Daggerfall, designed by a Dwemer architect called Kagrenac. Given that the Dwemer didn't follow the gods, Numidium was designed to be their own artificial godhead, with many in-game scholars theorising that it was going to be used to ascend the Dwemer to their own plane of existence. In Daggerfall, the Numidium is reactivated, triggering a Dragon Break that makes every single ending canon, even if they contradict each other. Mannimarco, for instance, both becomes the God of Necromancy and lives on as a mortal lich who we fight and kill in Oblivion.