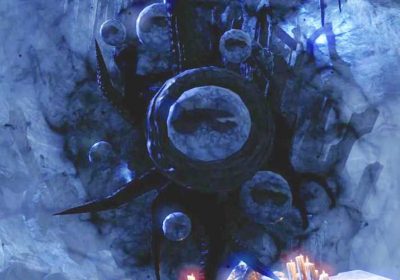 The Elder Scrolls Online sent letters teasing the upcoming 2023 chapter, stating that "the future of at least two worlds hangs in the balance", with us being the "thread that keeps reality itself from unraveling." Sleuths then used blacklight on the letter to uncover Hermaeus Mora's symbol, indicating that they are somehow involved in this plot.

There are a couple of key theories as to where this expansion will take us in Tamriel, or rather, outside of Tamriel. The "two worlds" mentioned combined with Hermaeus Mora could mean that we're visiting Apocrypha again, the grungy green swamp-like library of knowledge that we saw in Skyrim. We've had Daedric DLC before, with the Deadlands and Fargrave, so this wouldn't be unprecedented.

However, another theory focuses on something more meta, the actual term 'blacklight' which is required to see Hermaeous Mora's symbol. We've explored Morrowind in the base game and Vvardenfell in its own expansion, but one location still left unexplored in the province is the Redoran capital city Blacklight. It's possible that this location will finally be filled out, perhaps even paired with Apocrypha.

Even in Morrowind, we didn't visit Blacklight, as it has only ever appeared in Arena, the very first Elder Scrolls game. It's in the northwest, just by the Velothi mountains, and served as the capital following Mournhold's sacking in the fourth era. It wouldn't be the capital during ESO's time, but all of that is to say that it's an important city.

We might not have to wait long to find out what the letter means, as Xbox and Bethesda are holding a showcase on January 25, with The Elder Scrolls Online set to make an appearance. Perhaps we'll be revisiting Morrowind, or maybe we'll get lost in the eternal library of unending knowledge, fighting back seekers, lurkers, and even dragons again. Let's just hope we don't bump into Miraak.