Every Stage In DNF Duel, Ranked 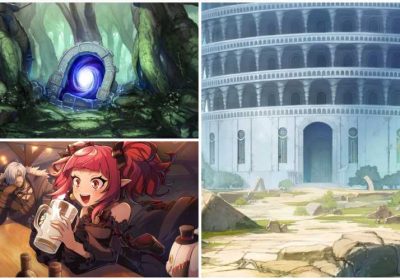 DNF Duel has established its dominance with its over-the-top combat, unique cast of characters, and unreal animations. While the eye candy surrounding each character and their abilities are mesmerizing, we can't help but feel that the stages don't get nearly the respect they deserve.

Every stage in DNF Duel has so much going on in the background that it feels criminal to overlook them. From crowded plaza squares and taverns to dilapidated towers, there's lots of variety here that offers something for everyone. While we can all agree that every character possesses overpowering qualities, we felt it was time to focus on the battlegrounds where they can show off their true potential. 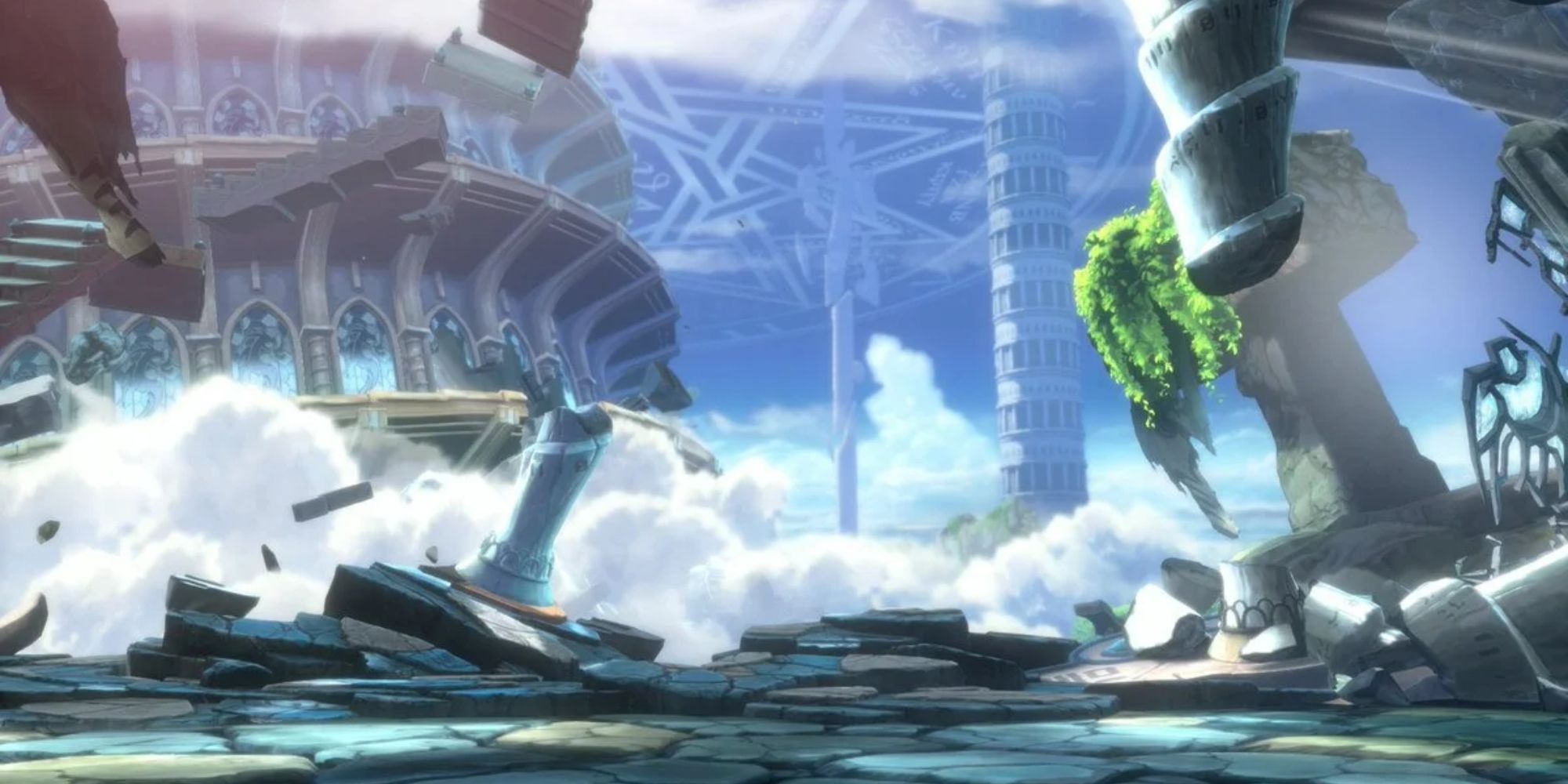 Being the game's 'default' stage, you'd expect Sky Tower to be bland or uninteresting. However, to our surprise, this arena has lots going for it, with the pop of bright greens and blues placed expertly in the background or the occasional flying ship that passes by.

Despite its last-place positioning, Sky Tower is far from a terrible stage. It just lacks the *pizazz* the others do. Regarding default stages, Sky Tower is a pretty dang good one and is far better than any Training Stage in other fighting games. 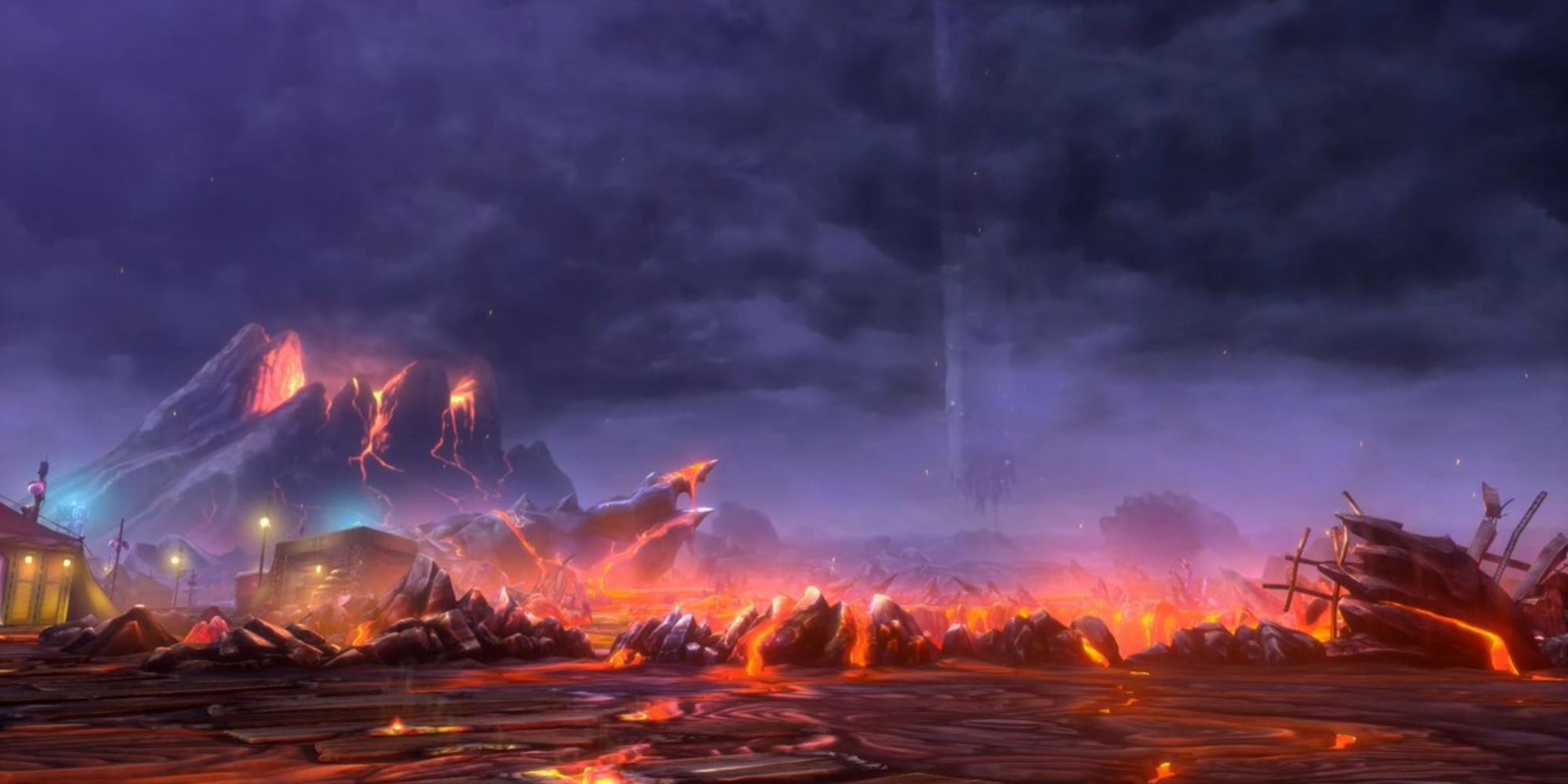 While a fascinating concept to have a city built upon the molten lava from a volcano, Zelva lacks that extra something needed to give it the extra push to be one of the game's best stages. We love the lamp posts illuminating the houses and the deep purple sky box but feel there's not enough here to warrant it being any higher.

Again, what's here in Zelva is an incredibly cool concept and direction, but we wish there were more to it. Perhaps ash or embers fluttering throughout the sky, or people moving around in the background to give it that 'lived in' feeling. Still, like the Sky Tower, this doesn't make Zelva a lousy stage, just not as pleasing as the others. 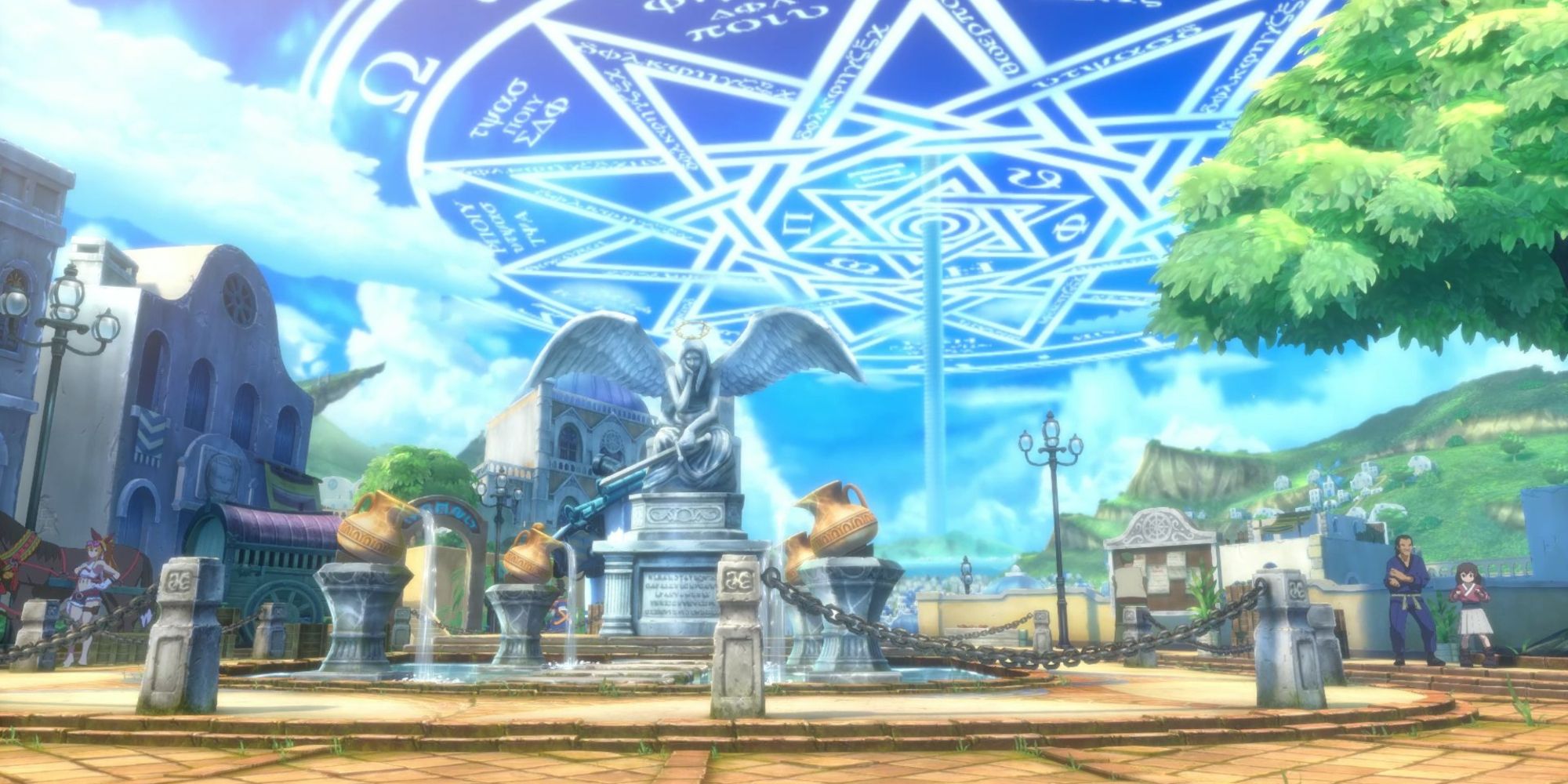 Hendon Myre is oddly similar to Sky Tower but is different enough to be placed higher. With the rolling hilltops of the countryside in the background, this populated plaza sticks out brilliantly. We love the fountain in the middle of the arena, the quest board off to the right, and the civilians roaming about doing their daily tasks.

Hendon Myre gives off the sense that people actually live here, which is always a much-welcomed detail that can do wonders for a stage. While not the best municipality in DNF Duel, it's an excellent arena overall, and we love everything it does. 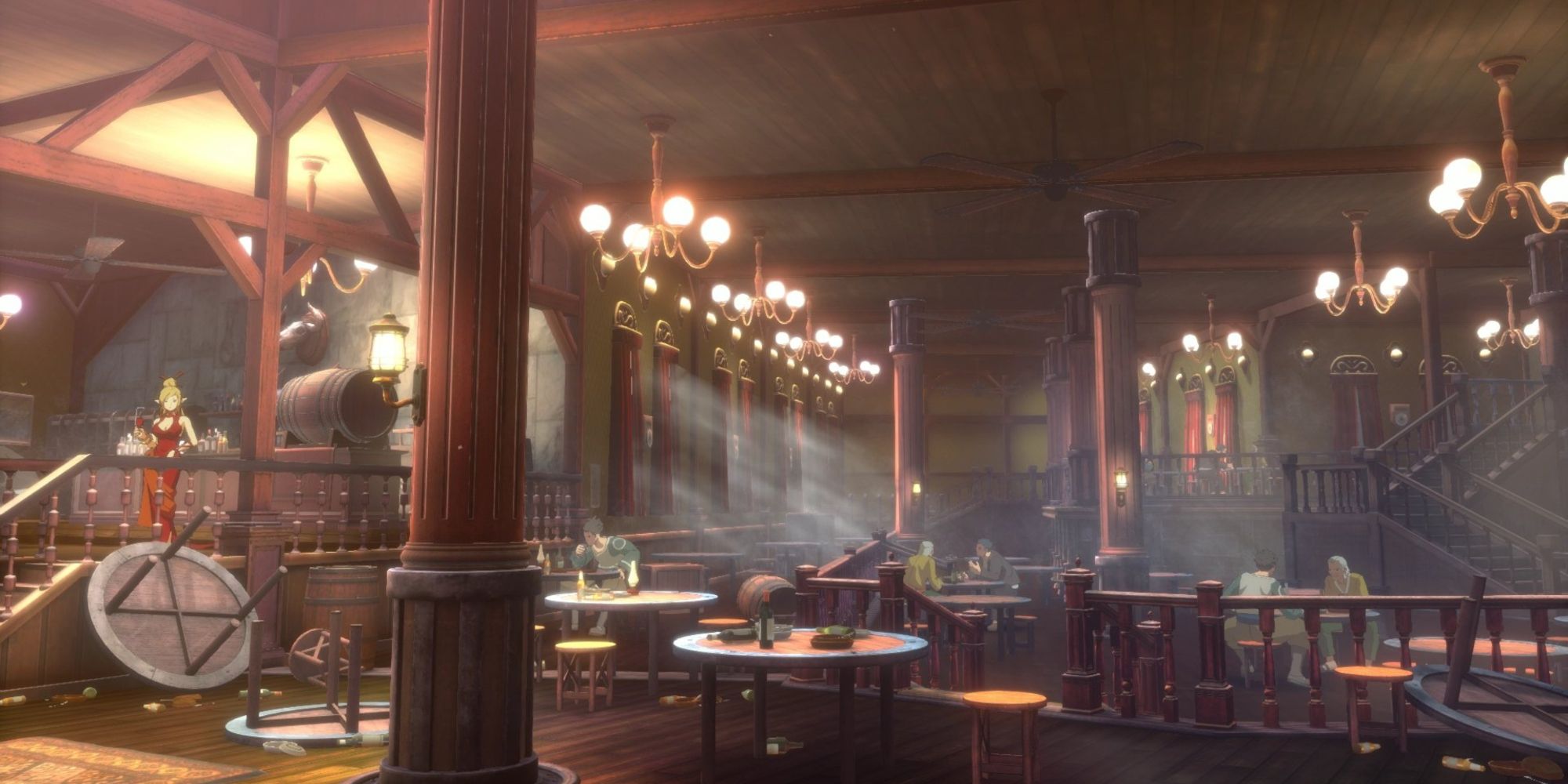 Speaking of places that feel 'lived-in' in DNF Duel, Moonlight Tavern may handle this aspect the best with its flipped-over tables, friends chatting at a table, and fellow revelers kicking back with a pint. The overall design of the tavern itself is also incredible, and we love how the rays of light pierce through the open windows.

Moonlight Tavern is a fun map and one of DNF Duel's best. While it's rather simplistic compared to the others, its overall presentation is astonishing, especially if you focus on the minute details happening in the background. This would easily crack the top three if the other arenas weren't so creative or bizarre. 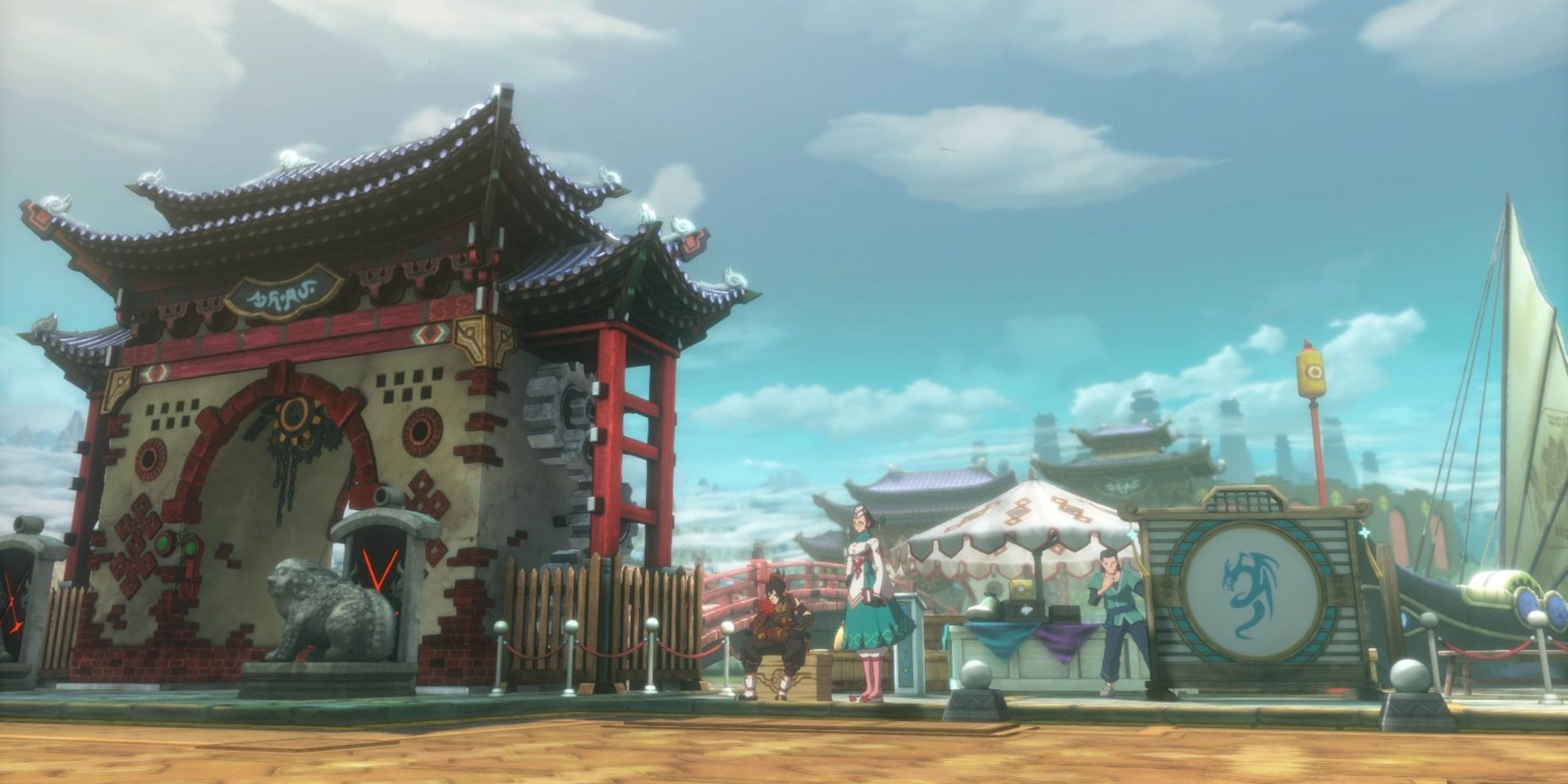 Ghent, City of God, is a breathtaking stage with a peaceful atmosphere and intoxicating landscape. Right off the bat, this arena has people roaming about, sitting on boxes, running shops, and… stalking the fighters? While the last one has points taken away, everything helps elevate Ghent above the others.

The Japanese-inspired architecture shines through and makes Ghent feel like the last-remaining hub of modern times in the twisted world of DNF Duel (aside from the tavern). Everything we have to say about Ghent is nothing but positivity, making it clear why it's considered the City of God. 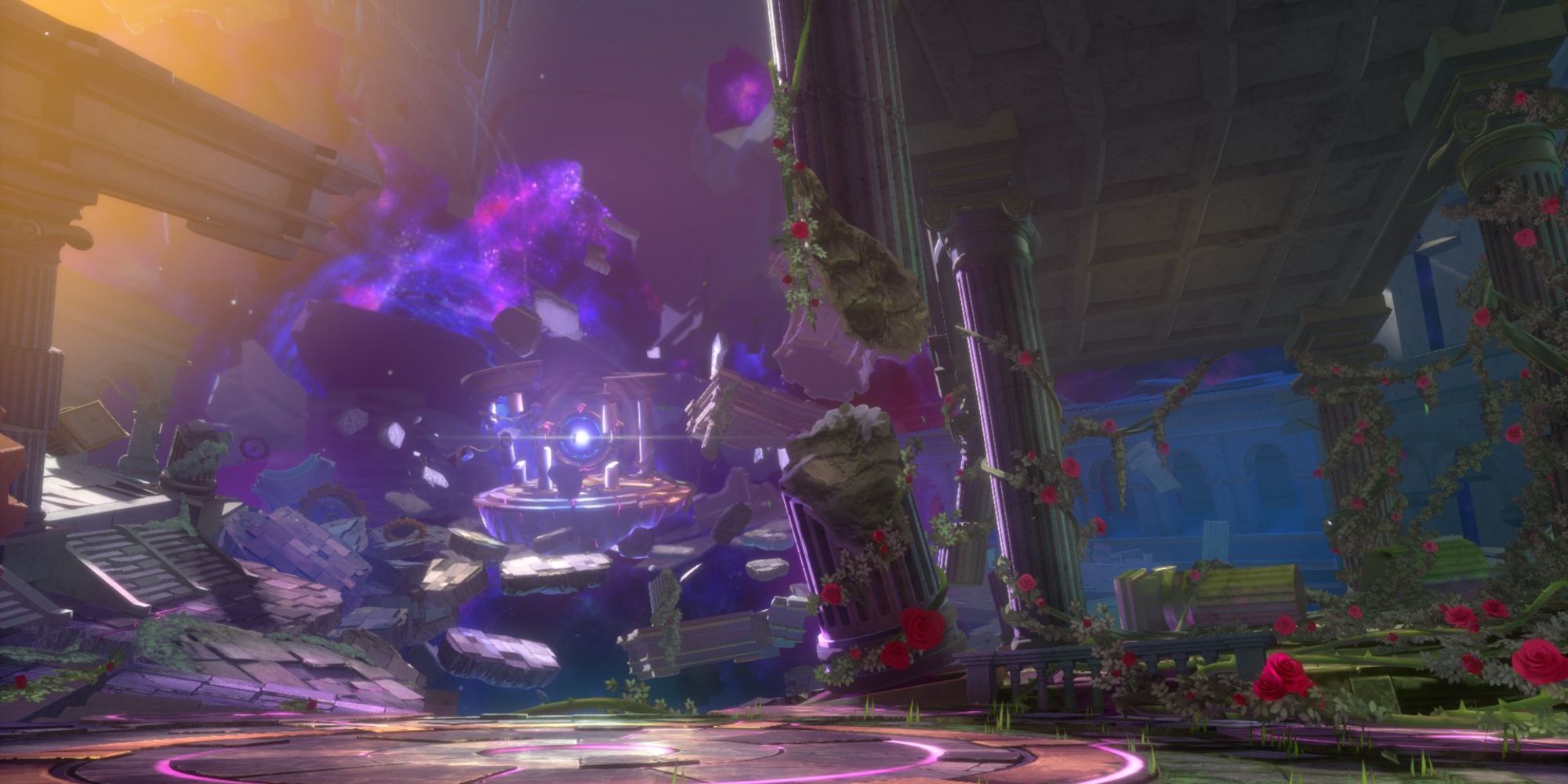 If Sky Tower is the default map, then Ruins is the map that everything is building towards, especially in the story. And you can clearly see why. We love everything presented here and think the color palette is unmatched. The splashes of deep purple cosmic matter and dark red roses make everything pop in the most beautiful way imaginable.

However, while we genuinely love how this map presents itself, we feel that the remaining two maps showcase the creative prowess of these devs a bit better, but only marginally. Ruins is a stellar stage and one that will always have us combing over the fine details and incredible splashes of color anytime we play on it. 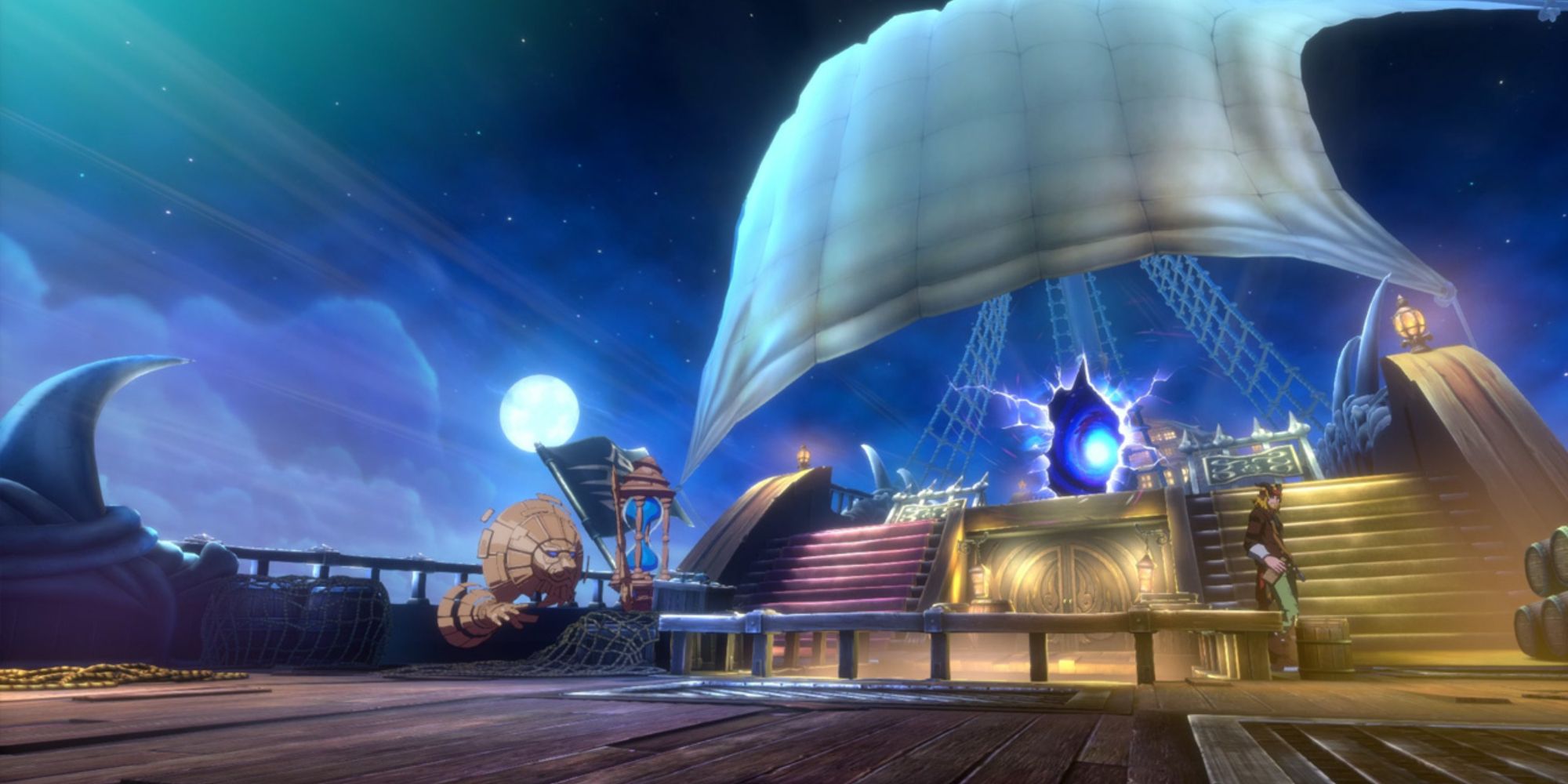 An airship soaring high above the clouds with nothing but the full moon illuminating it is our type of aesthetic, making Saint Horn easily one of DNF Duel's best stages. This arena is visually stunning on several levels, and the lighting and sky box are top-notch. The sky pirates are also a tremendous touch that helps tie everything together.

If you want to know how to get to our hearts, it's through pretty night skies, full moons, and the cloudy atmosphere this map provides. Saint Horn is, by all accounts, one of DNF Duel's most creative and beautiful stages and is always a delight to fight on. 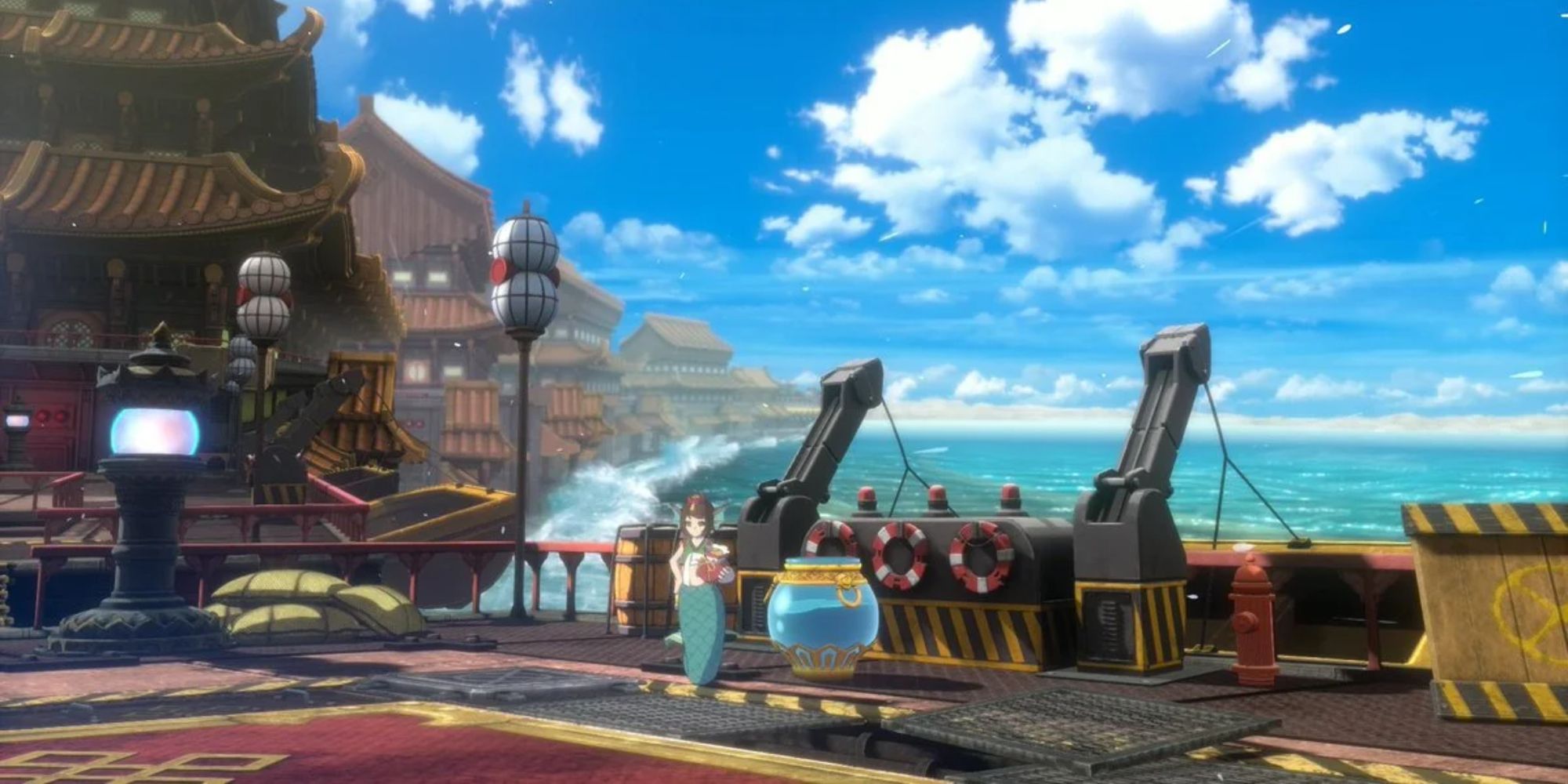 While on the topic of creative and beautiful stages, we got to give it to Oceanic Express, DNF Duel's best arena. This map is an enormous train inspired by Japanese architecture that traverses the ocean with a mermaid merchant that watches you duke it out. If that isn't awesome to you, then we want to know what is.

The water splashing against the side of the speeding train, the stunning architecture, and the beautiful sky box make Oceanic Express the best of the best. While there truly is not a terrible stage present in DNF Duel, some are clearly a cut above the rest, and Oceanic Express is such a fun, odd, creative, and breathtaking stage that flexes on the others.