Home » News » Everything We Learned At MTG’s Phyrexia: All Will Be One Debut

Everything We Learned At MTG’s Phyrexia: All Will Be One Debut 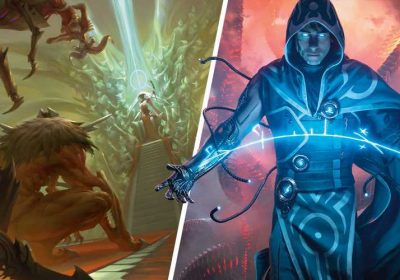 Magic: The Gathering’s next set is taking us to the closest thing the game has to Hell itself. Inspired by the Divine Comedy, Phyrexia: All Will Be One will see ten Planeswalkers descend into the bowels of Phyrexia, in a bid to stop the bodysnatching horrors from invading the multiverse. Expect lots of brutal art, and Gieger-esque body horror as we explore the enemy’s home turf.

With new mechanics, the return of Poison counters, and more than a few new compleated Planeswalkers to bolster Elesh Norn’s forces, here’s everything we learned about Phyrexia: All Will Be One in its debut stream.

Keep in mind that much of what was shown off at the debut was already revealed at the sneak preview stream late last year. This includes things such as the full-art panoramic lands, and the many showcase frames coming in this set. 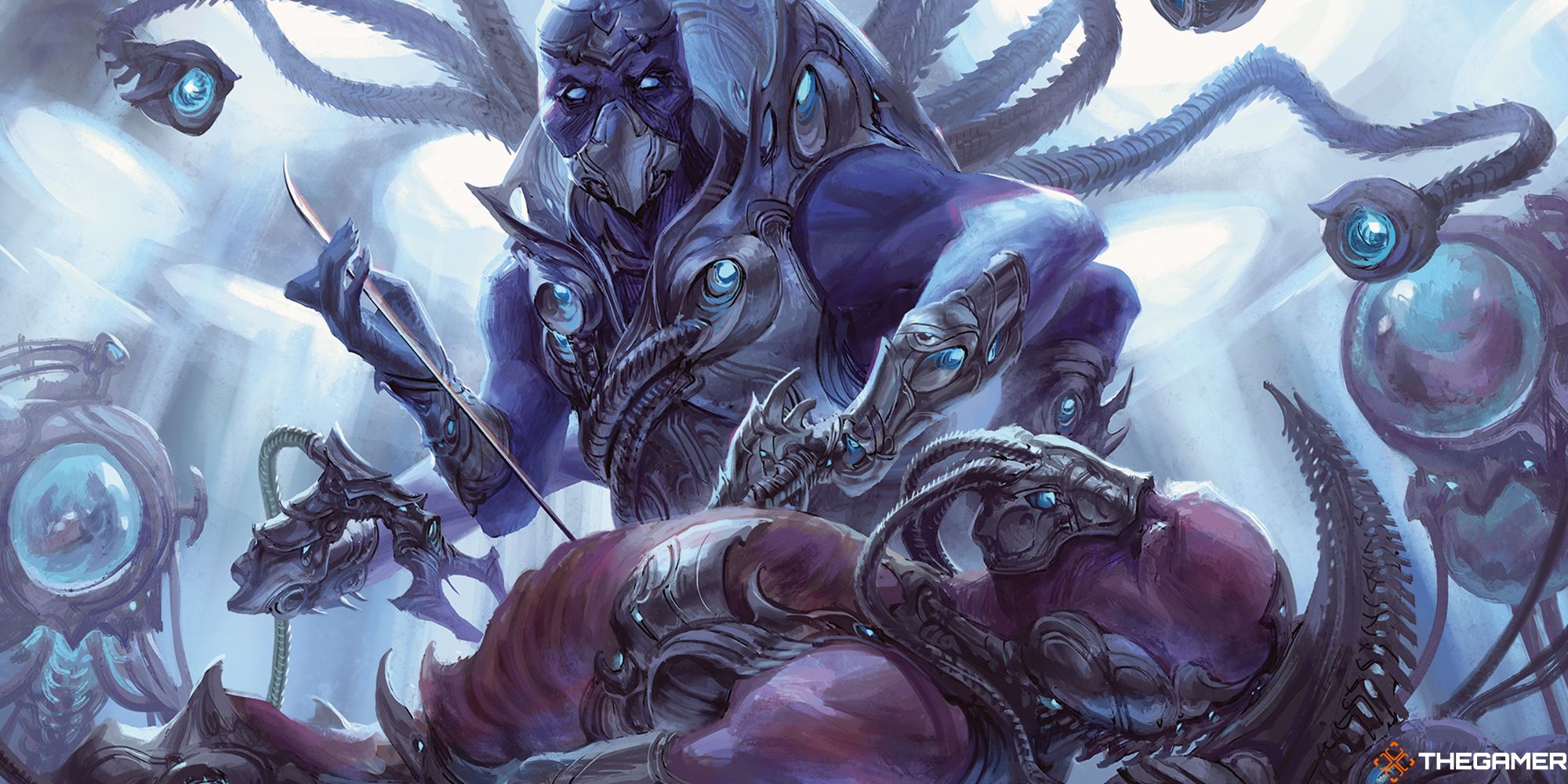 Phyrexia: All Will Be One features five central mechanics, with one returning, three brand new, and one providing a new take on the older, much-feared infect. 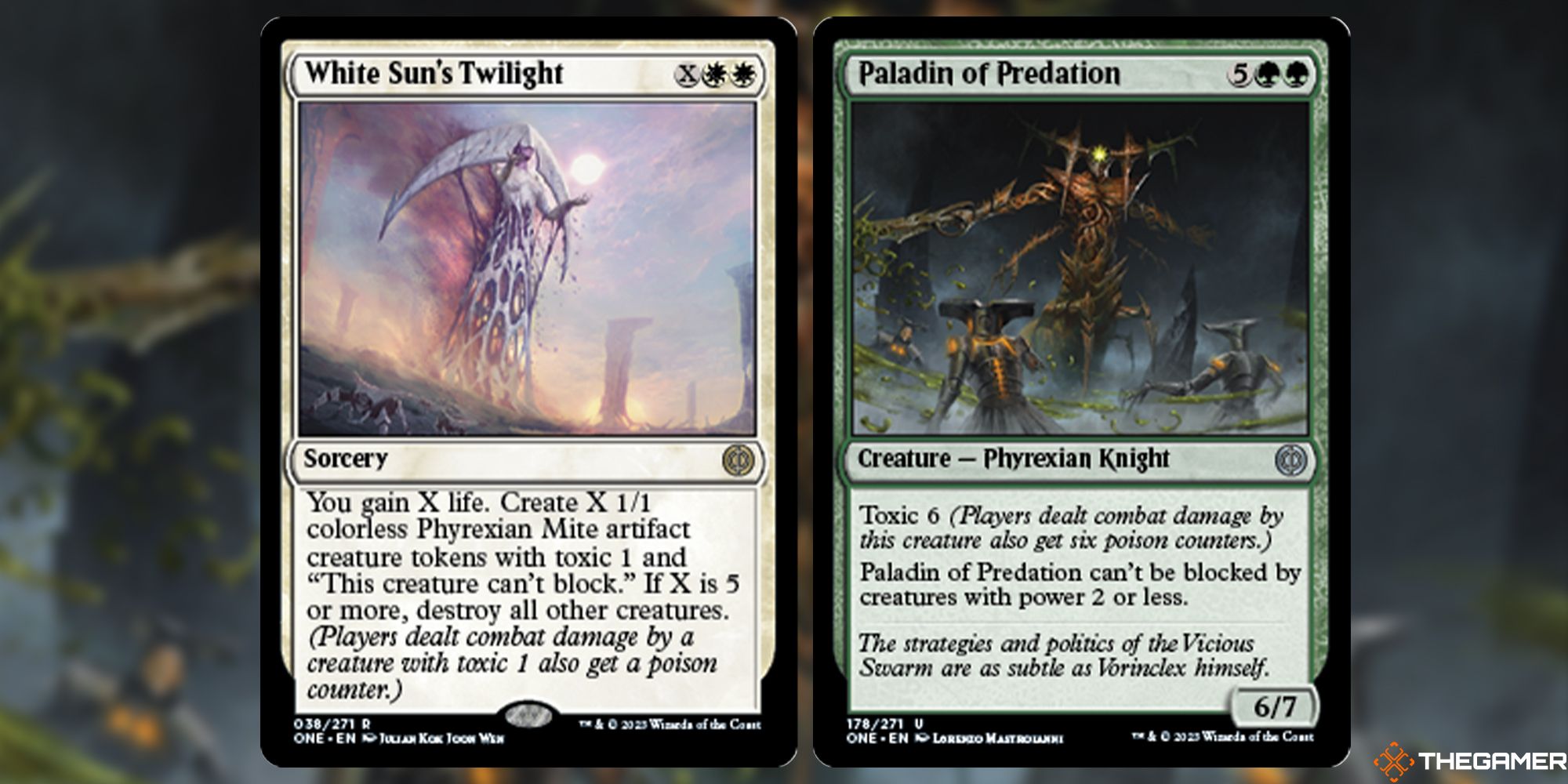 Poison has been a controversial mechanic in Magic for well over a decade now. While we’ve seen some attempts to bring it back, such as Kaldheim’s Fynn, the Fangbearer, ONE is making it a major theme with the new toxic keyword, found on many Phyrexian creatures.

Whenever a creature with toxic deals combat damage to a player, it will deal both combat damage and give the attacked player a specified number of poison counters. While this evocative of the widely hated infect mechanic, toxic differs in two key ways: 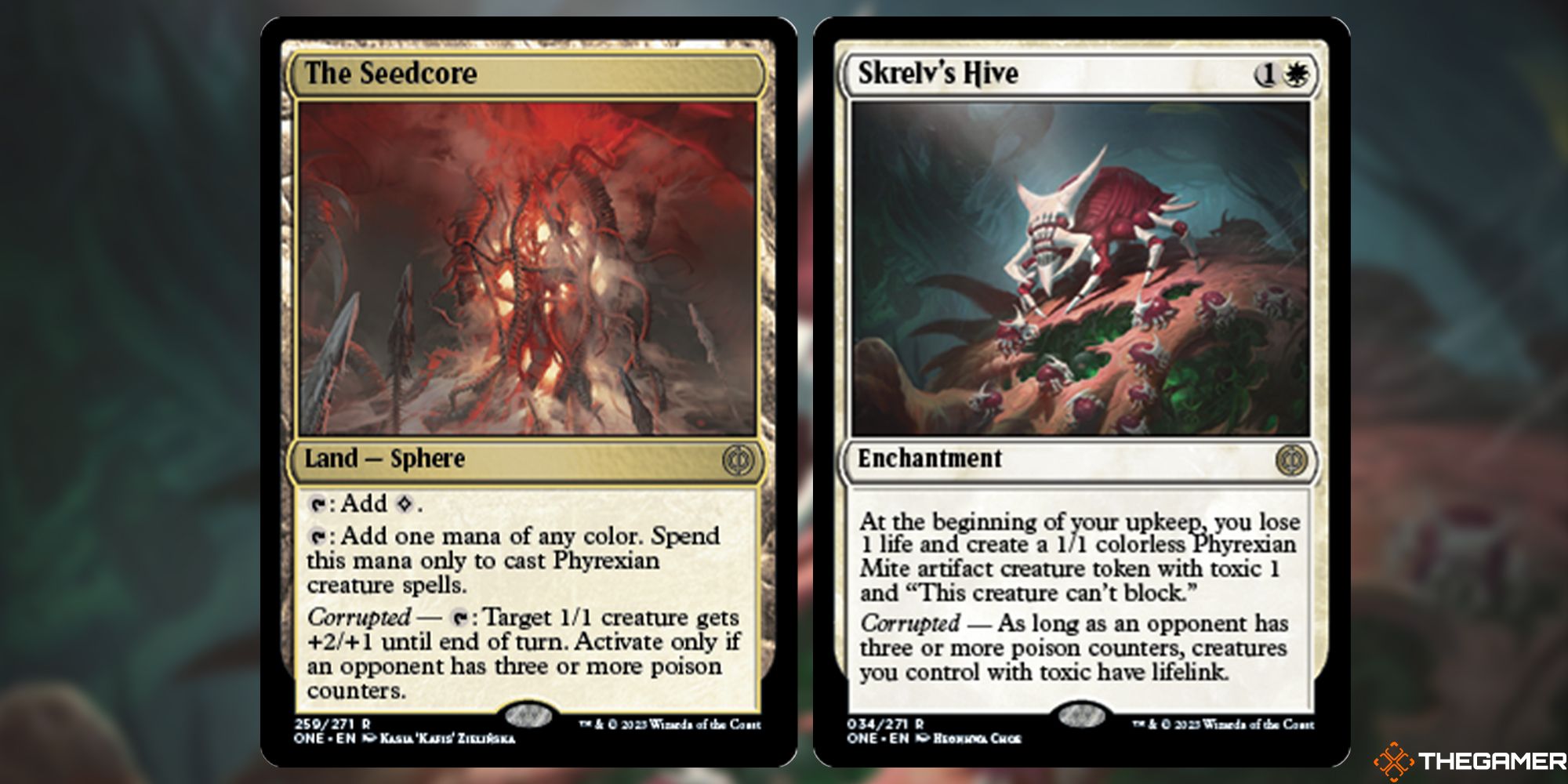 One of the big problems of Poison counters is that it is a very all-or-nothing mechanic. The only way a deck that uses them has traditionally been able to win is to go all-in and try and get ten on your opponent, with no kind of redundancy or backup plan if that somehow fails.

Corrupted provides the answer to that. It’s an ability word that activates when an opponent has at least a certain number of Poison counters. For example, Skrelv’s Hive gives lifelink to creatures you control that have toxic, but only if your opponent has three or more poison counters. 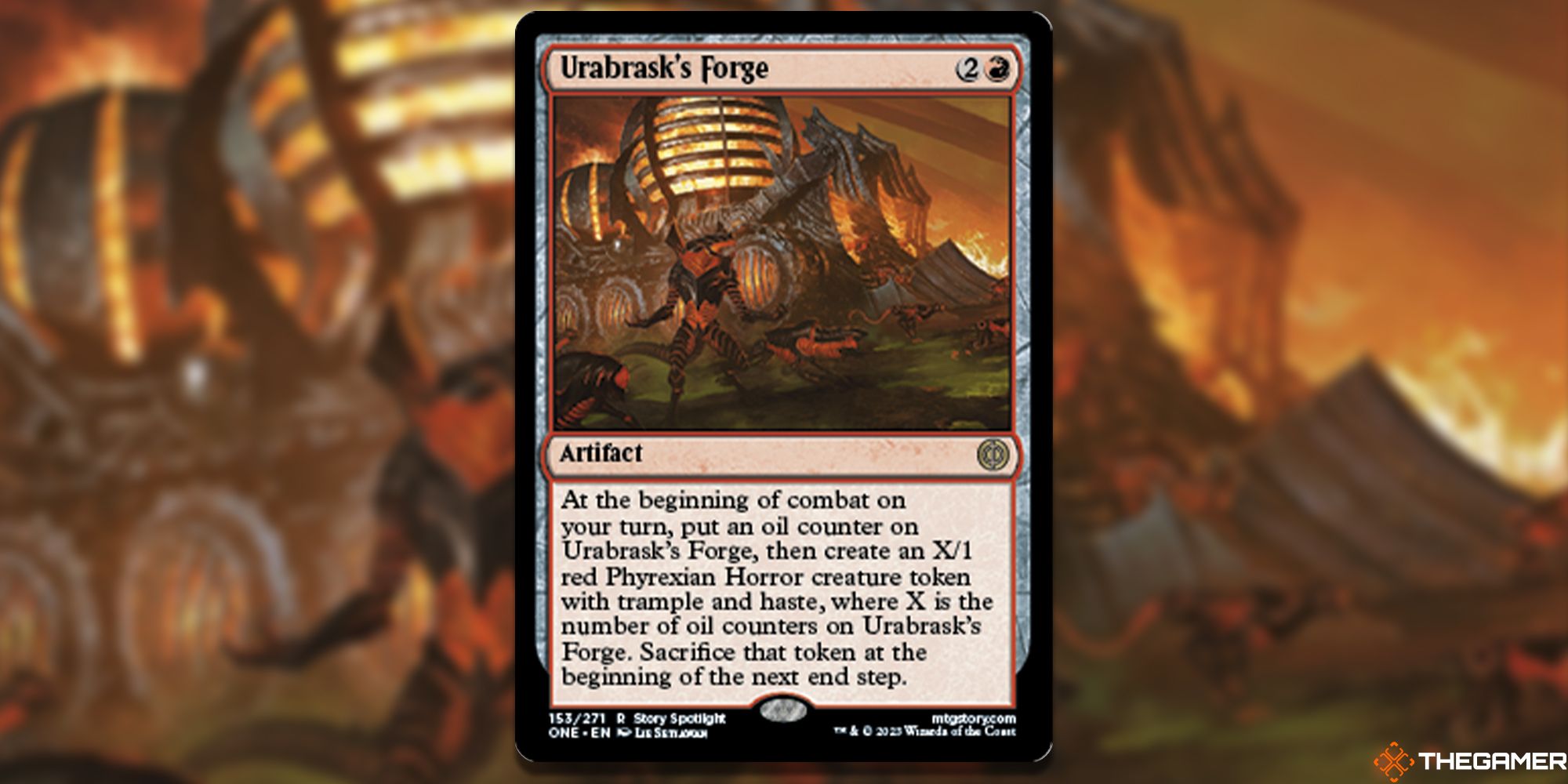 Phyrexia: All Will Be One is a rare example of a set that won’t have any +1/+1 counters. Instead, to reflect how the glistening oil of Phyrexia corrupts everything it touches, oil counters will be used for a wider variety of effects.

On their own, oil counters don’t do anything. However, a huge number of cards will interact with them in some way, such as Urabrask’s Forge making Phyrexian Horror tokens that get increasingly more powerful the more oil counters it has.

It’s tempting to lump oil counters in with the huge list of obscure, single-use counters like arrowhead, collection, or filibuster counters. However, with all the ways to play with counters introduced in recent sets like Streets of New Capenna, having one counter type that can be moved around a large number of cards could make it surprisingly powerful. 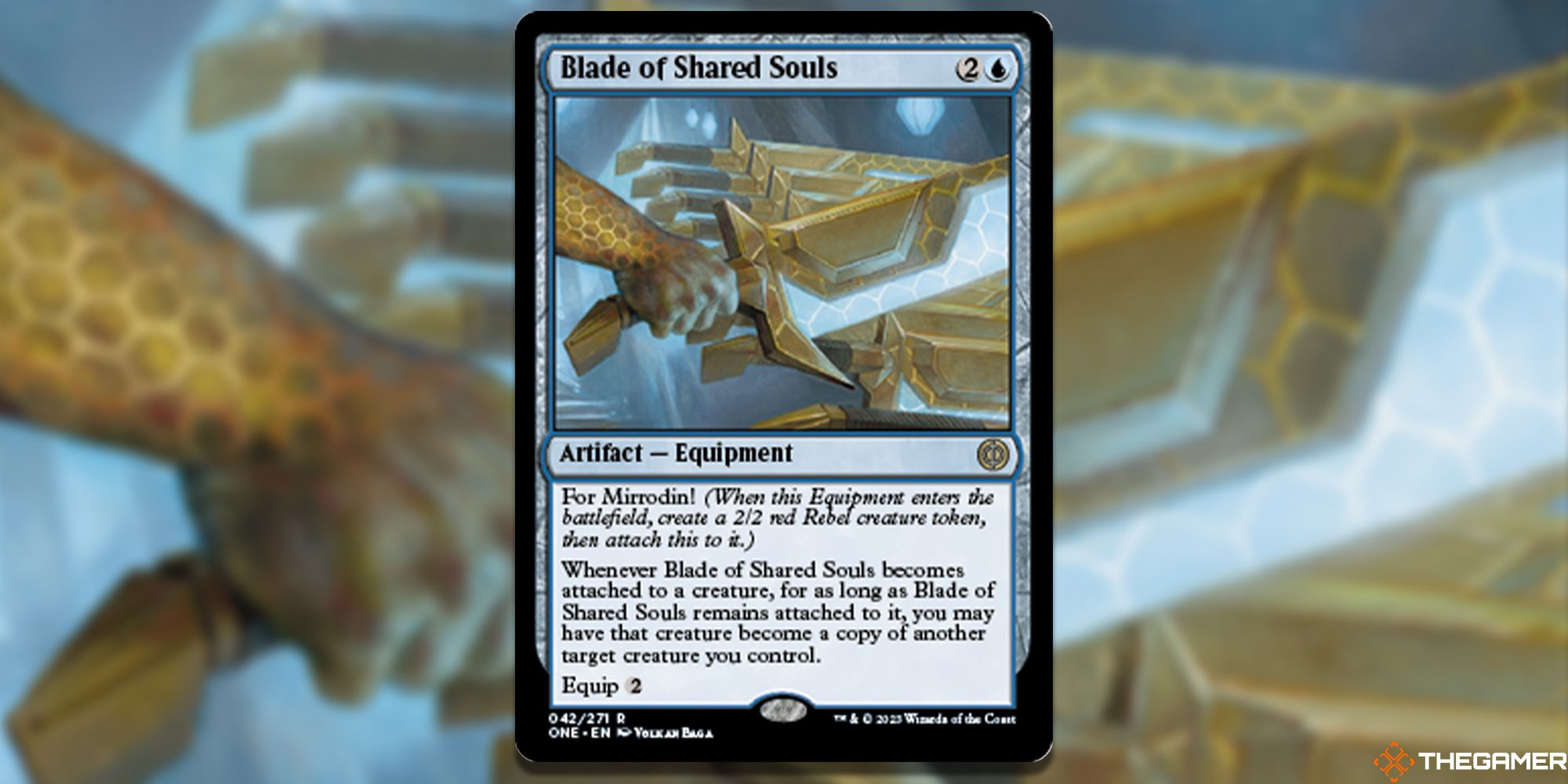 Phyrexia may be the home world of horrific monsters, but it was once known as Mirrodin, and many humans still live on the plane, fighting for survival with the hope of returning it to its former glory.

Whenever an Equipment with For Mirrodin! enters the battlefield, its controller makes a 2/2 red Rebel creature token, and then attaches the equipment to it. It’s very similar to Phyrexia’s own living weapon mechanic, but is slightly more powerful thanks to the tokens being 2/2 Rebels, rather than 0/0 Phyrexian Germs that die the second the Equipment is removed from it. 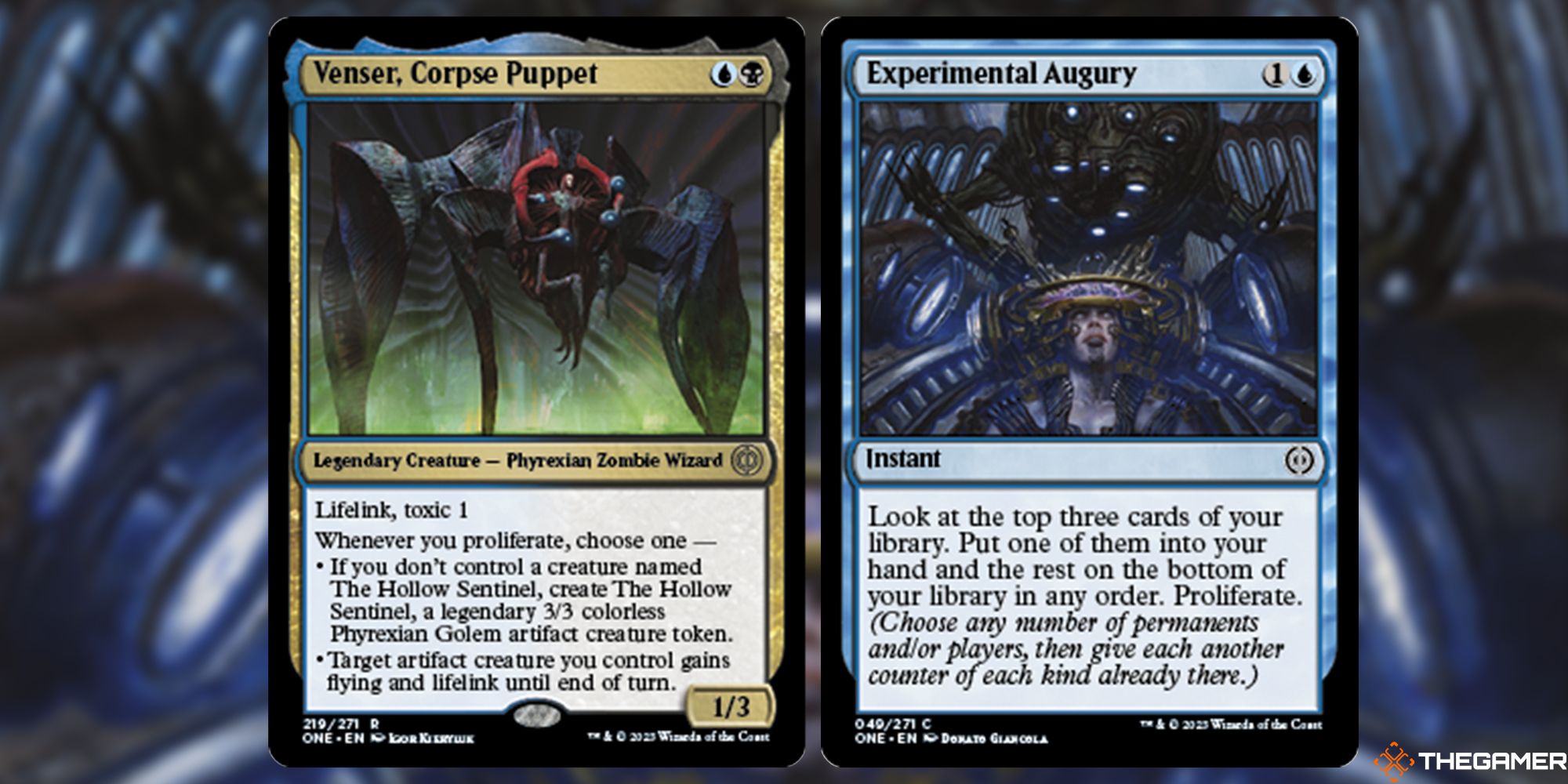 Finally, the popular proliferate mechanic is returning to play with all those lovely oil and poison counters. Whenever you proliferate, you can choose any players or permanents with a counter on them, and then put another of each of those counters on them.

In All Will Be One, that could be an easy way to rack up the Poison, supercharge your poison, or build up loyalty for your Planeswalkers. Elsewhere, it’s a great way to shore up any creature with +1/+1 counters on them, make something with a Shield counter on it even trickier to deal with, or keep a creature tapped down if it has any stun counters.

Proliferate’s also proven to be a strong mechanic, powering everything from infect decks to Superfriends. All Will Be One doesn’t look like it’s holding back on proliferation, either, with cards like Ezuri, Stalker of Spheres allowing you to proliferate twice in a row. 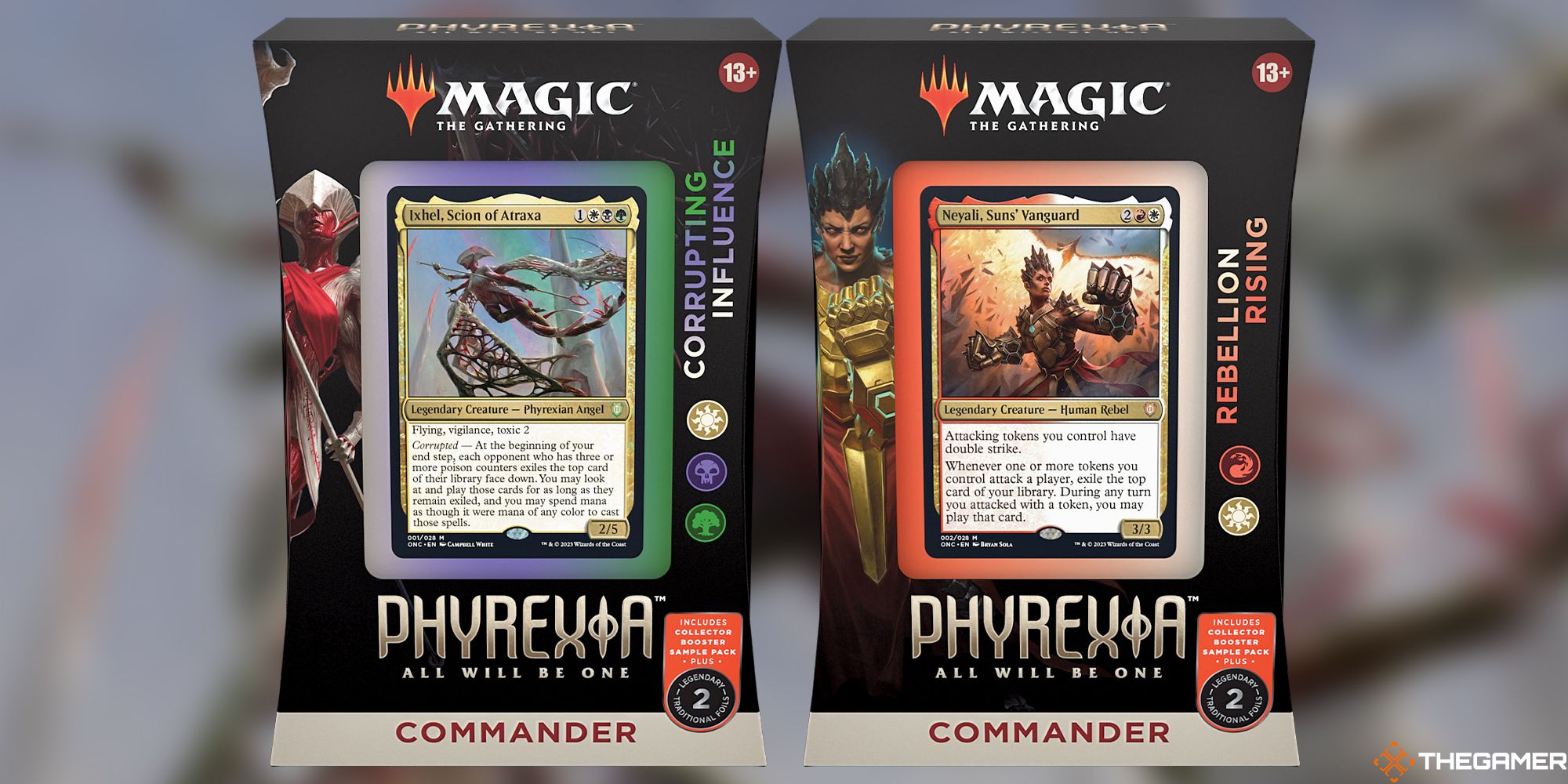 Alongside the mechanics, we also got a better look at the two Commander decks tied into Phyrexia. We only saw the face cards of each deck in the debut, with the full decklists to be revealed tomorrow (January 18). 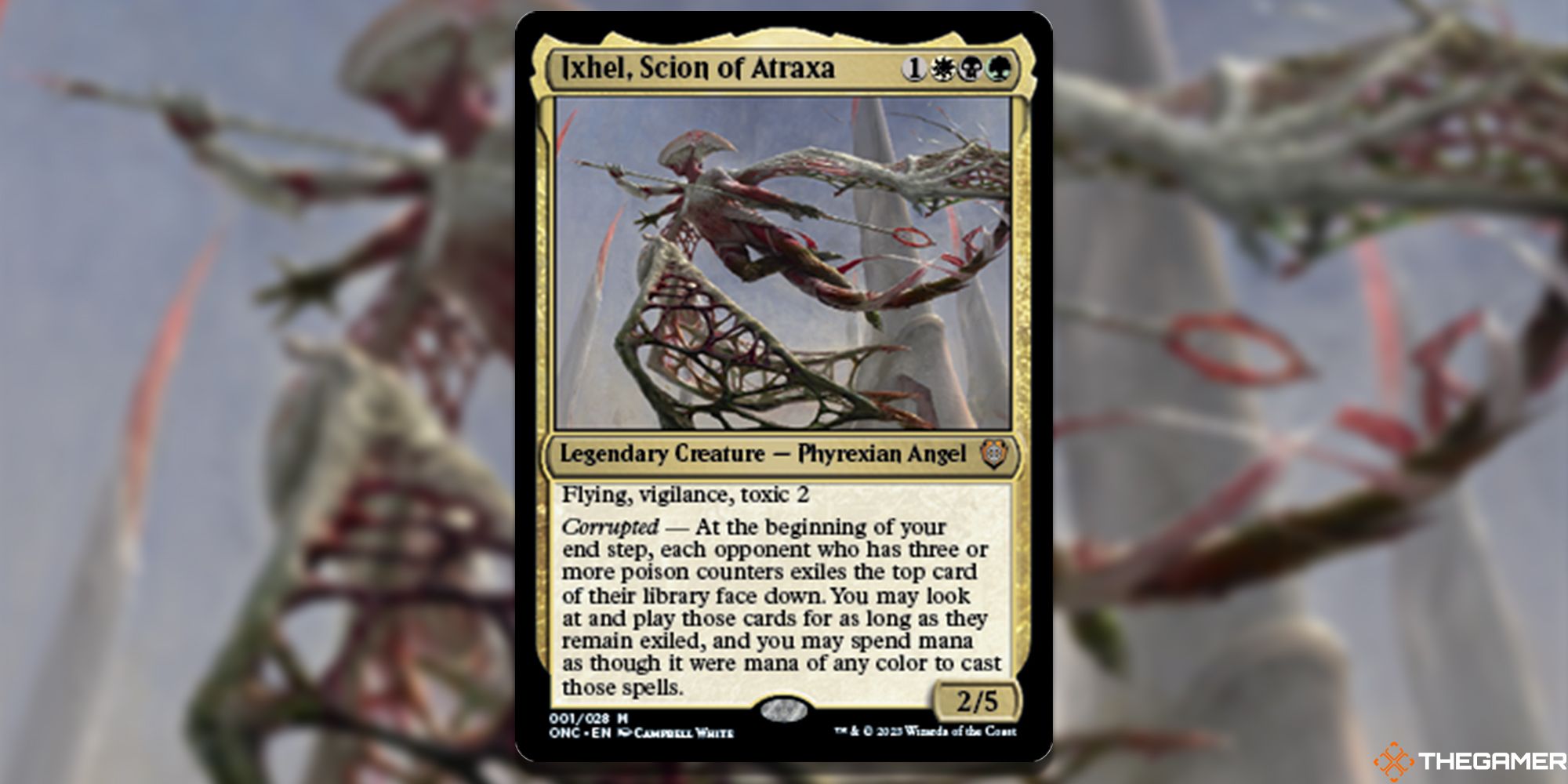 The first is a white/black/green deck called Corrupting Influence, lead by Ixhel, Scion of Atraxa. As the Phyrexian-focused deck of the two, it plays heavily with poison counters and, in particular, the new corrupted mechanic.

This deck aims to give Phyrexians more of a role and identity in Commander. In particular, corrupted means you no longer have to focus on taking out each player individually. By spreading Poison counters around, you can still get your corrupted effects without leaving yourself completely at the mercy of two other players. 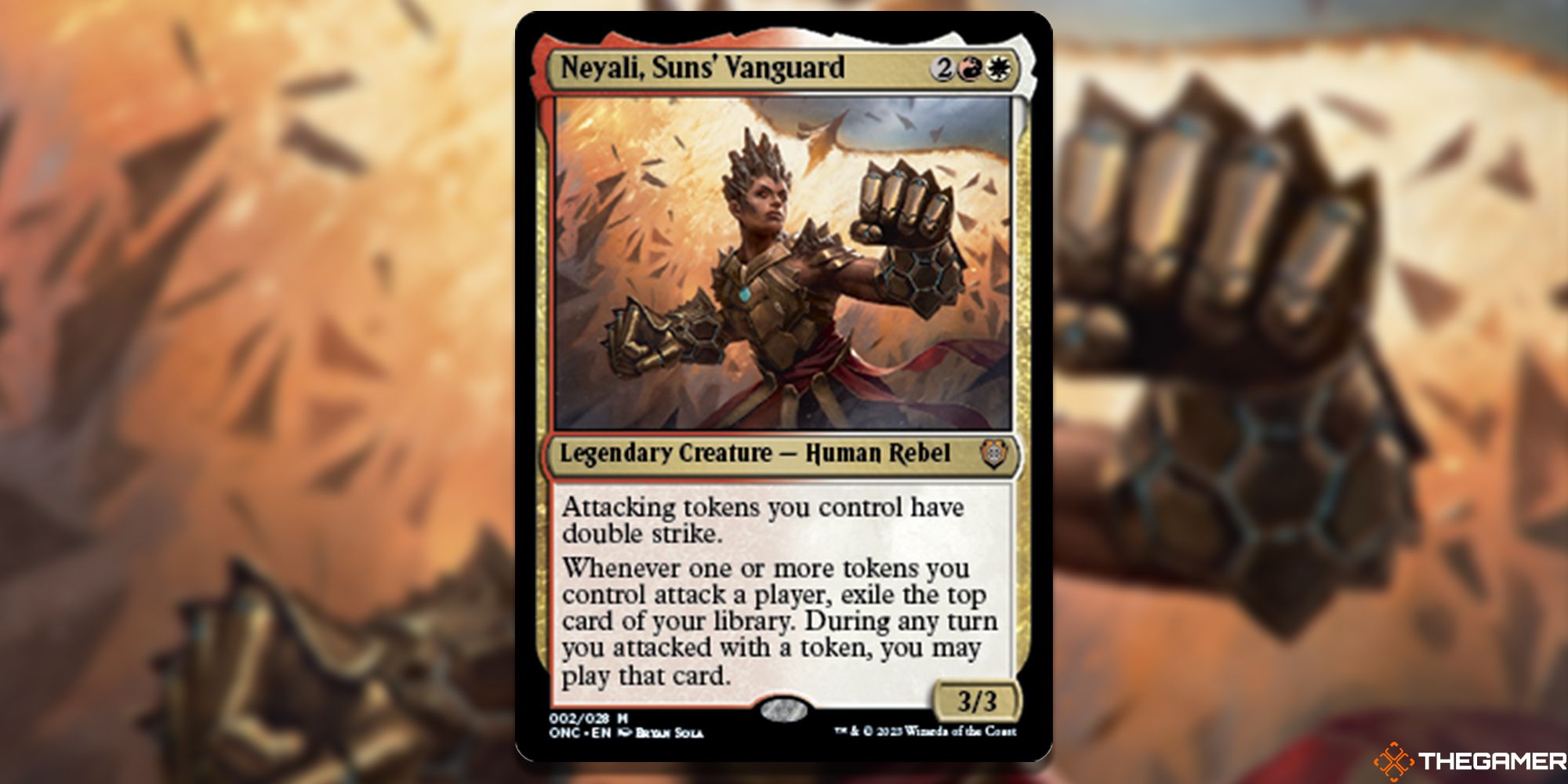 We know less about the red/white Rebellion Rising deck. We know it represents the Mirran rebellion still fighting the Phyrexians, and it’s been described by Wizards as a “go-wide token deck” with a Rebel focus, lead by Neyali, Suns’ Vanguard.

It’s likely that we’ll see a decent amount of For Mirrodin! here, meaning this could be a mashup of go-wide tokens, aggro decks that want to swing out every turn, and the more traditional Equipment-heavy decks red/white is known for in Commander. 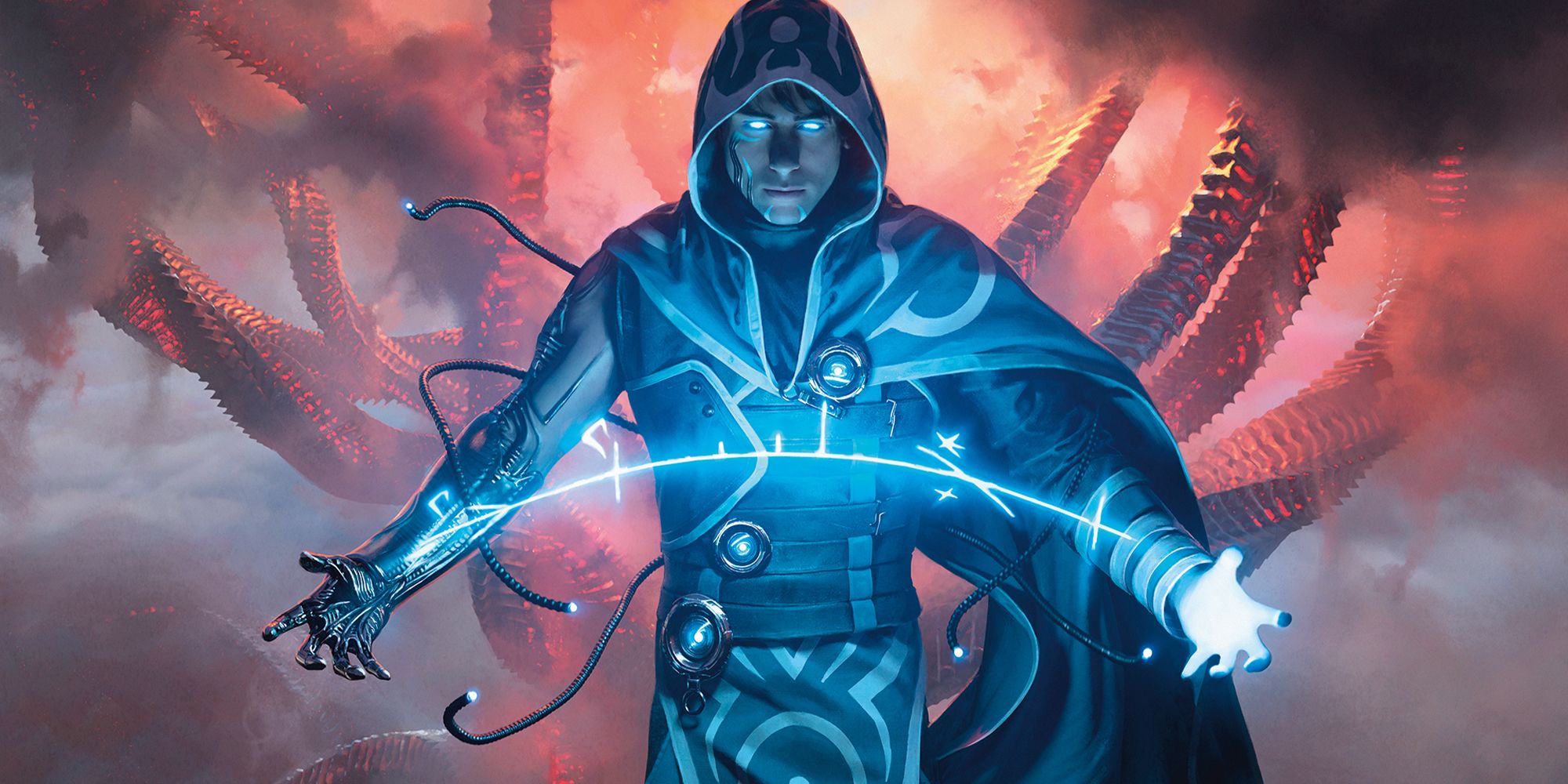 It was teased at the sneak preview event last year that, out of the ten Planeswalkers to feature in All Will Be One, only five of them would survive unscathed. The other five would become compleated – corrupted and forced to join the Phyrexian cause. With the story complete, we now know who all five of them are.

In possibly one of the biggest upheavals of Magic's status quo in years, Jace Beleren, Jace the Face, the closest thing we have to a main character of Magic: The Gathering, has become compleated. 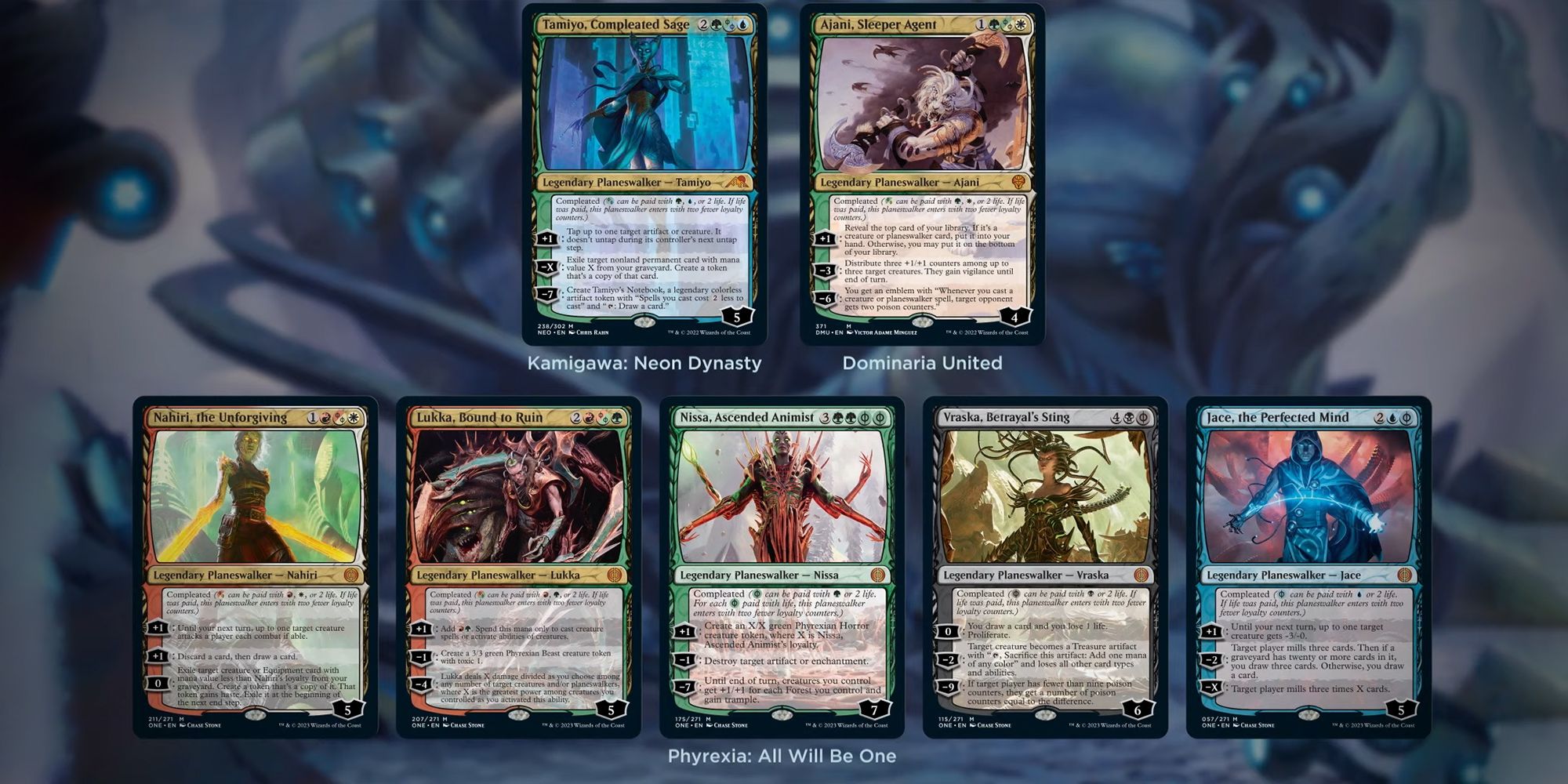 Joining the already-revealed Nissa, Nahiri, Vraska, and Lukka, Jace's compleated card, Jace, the Perfected Mind cares about dumping as many cards into the graveyard as possible. This set is giving us tons of powerful Planeswalkers, but Jace's ability to mill X cards three times in a row could prove to be disastrous in the right deck.

Of course, we'll have to see whether all these compleations stick after March of the Machine, but, for now at least, Jace – the only person in the Multiverse who knows about both Nicol Bolas' survival and Emrakul hiding in Innistrad's moon – is serving the Phyrexians. 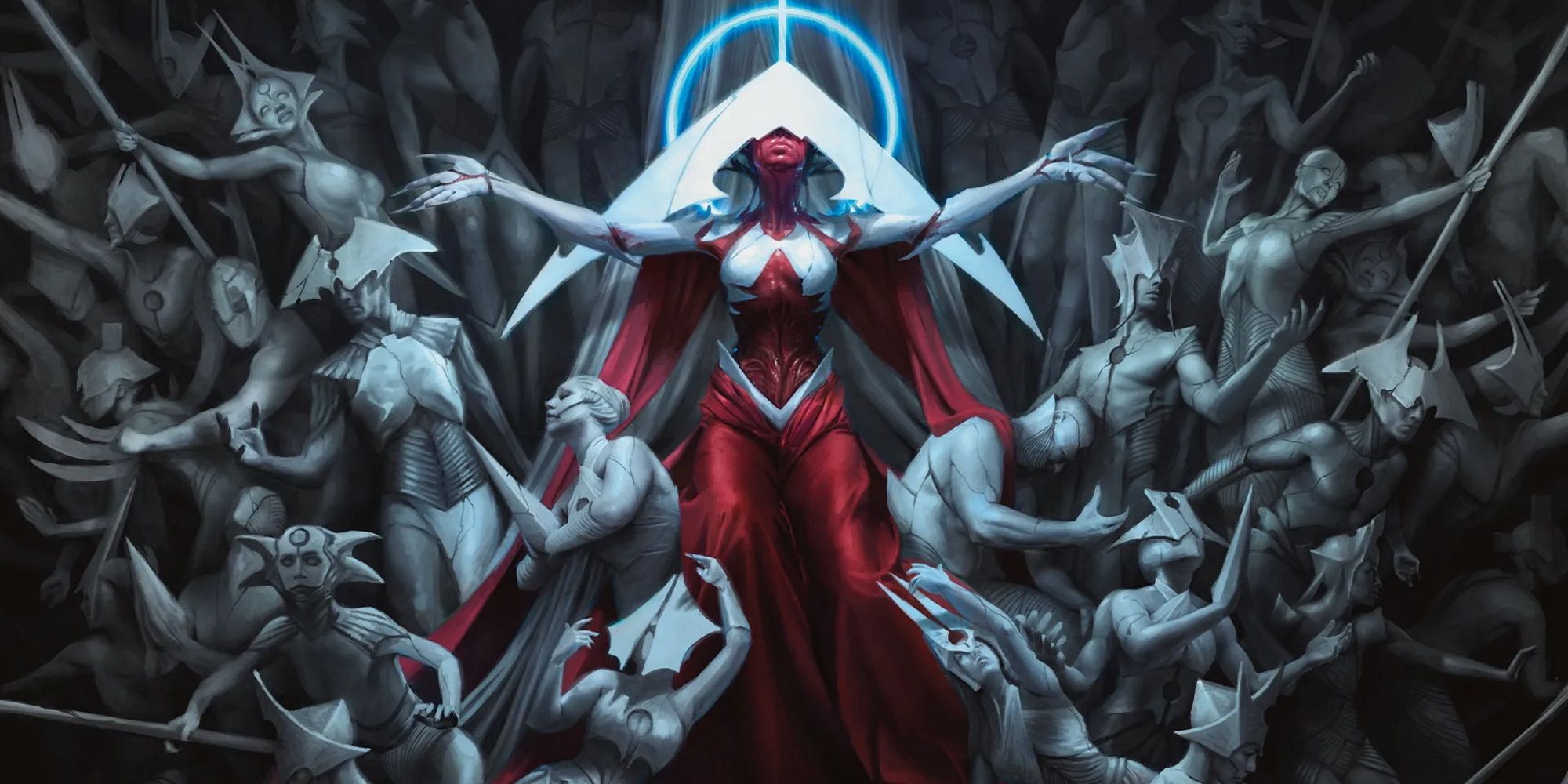 This debut is the official start of Phyrexia: All Will Be One's preview season, which will show off the entire set and both Commander decks over the next eight days.

Before we see any more of the main set, January 18 will showcase both of the Commander decks, including all of their reprints and brand-new debut cards. After that, new cards from the main set will be revealed each day.