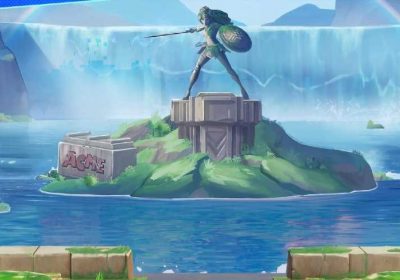 Gandalf was one of MultiVersus' first characters to leak and a new official tweet corroborates these early findings. Fans think that the new teaser art has a hidden Eye of Sauron reflection in the water, tying to a leaked model found in one of the maps.

"Trophy's E.D.G.E. is the perfect place for a game of I Spy," MultiVersus tweeted with an eye emoji. Someone shared this tweet and said, "You [forgot] to get rid of the Eye of Sauron's reflection," but it's possible that this was intentional, being part of the I Spy game mentioned. There's a lot of 'eye' being thrown around here (thanks, PCGamesN).

Nothing has been outright confirmed yet but it seems pretty likely that The Lord of the Rings' very own grey wizard will be making an appearance, slapping around Batman with Arya and co. But he's not the only one to have been uncovered in recent datamines. There's evidence that Legolas might also be coming to the Smash-like fighter.

The Eye of Sauron is even rumoured to be appearing in a map with leaked models surfacing online, but MultiVersus has yet to show off anything itself. The game launches sometime this month, though, so we shouldn't be left waiting too long to hear more. And Gandalf won't be the last character added.

MultiVersus will continue to support the game post-launch with plenty of new characters, although we're left guessing as to who they'll be. We know that there are copyrights for Space Jam, Ben 10, and Rick and Morty—some of these leaks were taken down by Warner Bros., such as Gandalf. So get ready for some magical wizardry to spice up your IP brawler.

In other MultiVersus news, director Tony Huynh has teased a character that he's never "seen done before," sparking speculation about LeBron James or Rick Sanchez, but again, we'll have to wait and see.