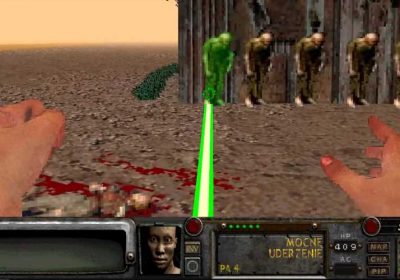 The original Fallout games weren't first-person shooters, but top-down, isometric, turn-based RPGs. Over the years, some have tried to bring 1 and 2 into Fallout 3's engine to give them a more modern feel, but now one fan has gone back to the second game itself and remade it in first-person, all while keeping its old sprites and maps.

The video opens with ConstructVOD standing in front of a bunch of civilians with their hands out. You can see their sprites face-to-face, giving the game a Doom-like aesthetic and feel (thanks, PCGamesN). They then jolt into action and start attacking enemies, throwing punch after punch, before showing off guns and melee weapons.

Targeted enemies are highlighted green, and to help with aim, there's a giant green bar showing your direction. This makes it a bit easier to know where you're firing (or swinging, if you're more into fisticuffs – gotta conserve that ammo). So far, developer ConstructVOD has recreated the Klamath and Arroyo regions, both of which you can explore right now.

The green line that shows where you're aiming and what direction your facing is also impacted by perception, to show how far you can shoot. The higher your perception, the longer the green bar will stretch out, meaning that you can hit targets further away. This is a neat twist on the turn-based version which let you select enemies that would otherwise be out of range to attack, and it's indicative of how this remake is using Fallout 2's mechanics as the foundation for the FPS gameplay rather than replicating the modern 3D titles.

That being said, it is real-time, which you can see in another video shared by ConstructVOD embedded below. When attacked, the screen flashes with a red vignette, indicating that you're taking damage. Enemies will constantly be firing at you so long as you're in range, unlike the originals where you would take turns to fight. This completely changes the way combat feels, as your focus is now split across health management, placement, and attacking.

The same video shows a new power armour overlay, giving a unique perspective when donning a set. This is akin to Fallout 4, but stays within the retro aesthetic of the original games. There are several updates and gameplay showcases on his channel, but if you want to jump in and try for yourself, it is now open for early access.

Given the perspective change, it has completley different controls to the original Fallout 2, but these controls will already be familiar as they use modern bindings: WSAD for movement, CTRL for sneak, LMB for attacking, and tab for stats. If the original Fallout 2 wasn't your speed but you want to see more of this world, maybe this is the solution.

The remake is still early in development, but it's an interesting glimpse into what Fallout could've been if it started life as an FPS, rather than transitioning later on with the third game after Bethesda took over.