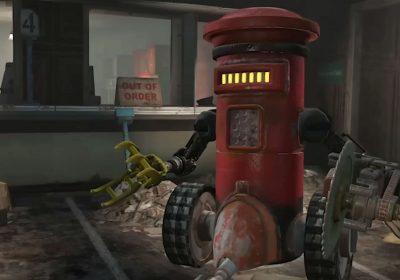 Fallout London has revealed its 4th Quarter progress video for 2022, highlighting a few interesting new details. For one, the London Underground is now operational with "fully-rigged and animated train systems". The original trailer that revealed them was actually using side-by-side elevators, so this is a significant leap.

What this means is that you can hop on a train at one station, ride it to the next, and continue to explore the wasteland that is London. And in that wasteland are a few new enemies and collectibles.

One is a more British-themed robot, a postbox on wheels with a sawblade and claw instead of hands. Then there are naval walkers which are esentially ocean bombs with feet. If they get too close, they'll explode, and there are several colour markings to indicate what variety they are, which each one boasting its own "surprise".

Collectibles are a big part of Fallout. Whether you're scrounging for bobbleheads or trying to dig up magazines, pre-war or otherwise. Fallout London is no different, but like the killer postboxes that chase you down for missing deliveries, these are more British.

"Legally distinct 005 magazines" are one of the many types of magazine you can find across the wasteland, and they're exactly what they sound like – a 007 parody. If you don't know what 007 is, you might know him by another name, James Bond, and he's plastered across all these magazines with a parody of the logo.

Not only can you find 005 magazines, there are also posters, showing that this wasn't a niche interest but a cultural phenomenon, just like the real Bond. Maybe these magazines inspired a certain wastelander to take up a pistol and a suit – the perfect Fallout London build.

Finally, the progress video ends with a look at a boat trip featuring a singing robot, serenading you as you wade through a post-apocalyptic, flooded London. Music is a key focus in the mod, with the video also revealing that there are 100 new music tracks, and 40 of those are for radio stations. You can tune in, or you can get the boat-bot to sing to you – it's like taking a gondola through Venice, only a bit muddier.