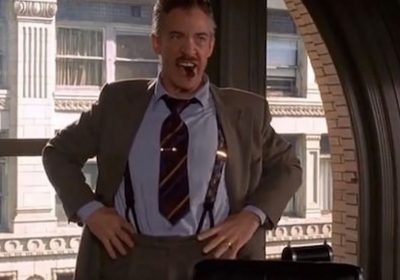 An eagle-eyed fan on Twitter has spotted a Daily Bugle newspaper in the new Venom: Let There Be Carnage trailer. Below is a story titled, “The Hidden Victims Of Cletus Kasady.” As for the logo itself, it’s the same one used in the Sam Raimi Spider-Man films.

However, it can’t exactly be in that universe given that there’s already an Eddie Brock who is dead following the events of Spider-Man 3. It could tie into No Way Home with a re-used logo from the original trilogy, or it could be its own alternate universe. It’s hard to say from one still in a trailer, but that’s not all we have to speculate with.

Another fan, back in February of 2020, took a photo of the Morbius film’s set which had that very same logo. We already know that Morbius is in the same universe as the MCU what with Michael Keaton’s Vulture making an appearance in its trailer, and with it being in the SUMC, it’s also sharing a space with Venom. That Daily Bugle story read, “Where Is Spider-Man?” It’s all coming together, but how will that visualize in this Venom v. Carnage extravaganza?

Due to sharing the same logo across two films, Michael Keaton cropping up as the same character he played in Spider-Man: Homecoming, and with a nod to the wallcrawler in a leaked set photo, perhaps this is part of Venom: Let There Be Carnage and Sony’s general push to join in on the MCU’s fun. Maybe Tom Holland’s long-rumored cameo will actually come to fruition, or perhaps we’ll even see Eddie Brock butt heads with J. Jonah. Jameson down the line.

At any rate, it seems as though Sony and Marvel Studios are getting more comfortable with one another. Whether Venom 2’s exploration of this relationship is just the odd nod here and there as seen in the new trailer or if something more meaningful happens remains to be seen, but we’ll find out on September 24.