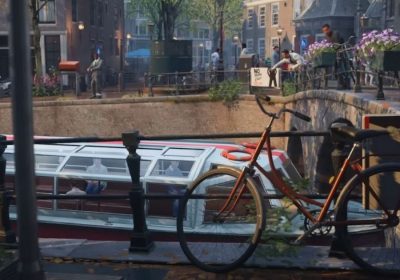 We have more newsletters

Modern Warfare II won't be released until midnight tonight, but leaked footage of the latest instalment in the Call of Duty series has still managed to send fans wild thanks to its jaw-dropping graphics.

Viral footage of the game's Amsterdam level was shared by Juan Buis on Twitter, who highlighted the 'incredible' level of detail and said that he "almost can't believe this is a video game".

Fans of the long-running shooter series and even non-gamers have been blown away by the footage. "Took me a good 20 seconds to realise that was an animation," said @par_ham.

READ NEXT: Daily Star launches Lizzie Lettuce NFT – get yours for FREE before it's too late

Another Twitter user, @fransvh, said: "As a 3D artist living in Amsterdam, I really had to look twice to see that this is a game. Only the humans look fake, but for the rest I am deeply impressed."

Eagle-eyed gamers still pointed out some flaws in Activision's reimagining of the Amsterdam street scene. "One thing bothers me: not a single cyclist in sight," wrote Twitter user Pedro Marques, referring to Amsterdam's bike-mad roads.

One even said: "Why do people still move so awkwardly in video games? That's the most obvious give away that it's a game at this point."

To highlight just how realistic the in-game graphics are, one Amsterdam local went to the exact same location in real life and shared a video of it.

It adds a number of new features to the campaign including upgraded AI, co-op, new gameplay features and a series of new game modes.

Fans of the free-to-play Battle Royale mode, Call of Duty Warzone, will also be treated to Warzone 2.0 next month, an upgraded sequel to the hit multiplayer online game. It will feature more AI enemies as well as a desert-themed map.