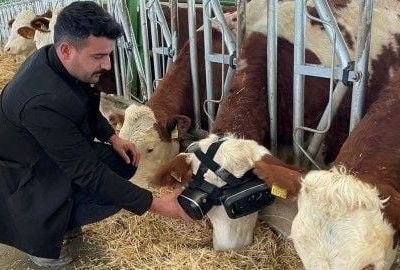 When manufacturers first designed VR headsets, the goal in mind was probably to make users feel like they were in a place they're not, to interact with things that weren't there, and to make cows believe they were in a real meadow. That last one may not actually be true, but one farmer in Turkey has used VR goggles for exactly that purpose.

As reported by Metro, Izzet Kocak has made his cows feel at home by strapping two VR goggles to their heads, one for each eye. The aim was to make them feel like they were in a lush, open meadow, instead of a barn. But why would anyone strap expensive tech to the head of a cow, you ask? Besides wanting them to experience Valve's best game in years, Half-Life: Alyx, Kocak says that simulating a green pasture helps the cows give more milk.

"We get an average of 22 liters of milk per day from the cows in our farm. The milk average of the 2 cows [that] wore virtual reality glasses was up to 27 liters," he said. "They are watching a green pasture and it gives them an emotional boost," he continued. They are less stressed."

The idea was a result of a partnership between developers, vets and consultants at the Krasnogorsk farm near Moscow. The colour palette had to be altered to make it suitable for the cows' vision, as they can only perceive "shades of yellow and blue".

The winter months make it impossible for cows to experience green fields, so farmers have had to resort to innovative ways to make their cows feel at ease. Kocak previously had to use classical music to soothe his cattle, but the VR goggles have worked so well that he now plans to buy 10 more sets.

I'm no farmer, vet, or IT expert, but there's only that much milk you can get from a cow by simulating a meadow. Everyone knows that Mick Gordon's Doom 2016 soundtrack is the ultimate motivational music, so maybe Kocak should load up Doom VFR on those headsets and get his bucket ready.