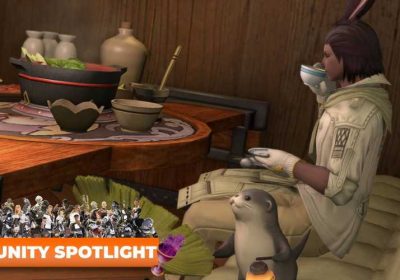 Whether you’re entirely new to the Final Fantasy 14 roleplay scene or an experienced veteran, it can be hard to find the perfect venue for you. Personally, I like somewhere I can idle and enjoy the vibes while still getting work done on my second monitor.

Fortunately, there’s a particular type of venue for players like me — AFK Cafes. Otter by the Water is one such cafe on Jenova, Aether, that falls into this category. It offers the perfect place for casual RPers, or any players who simply wish to pass the time in the company of others.

“It’s a venue where we encourage you to stay as long as you like, without the pressure of having to chat or roleplay, unless you want to.” Safir Atkascha, the proprietor and manager of the cafe, tells me. “Kind of like how some players lurk in Limsa Lominsa to pass the time. The difference is we’ve tried to create a chill environment that encourages relaxation. And our chat is way more vanilla.” 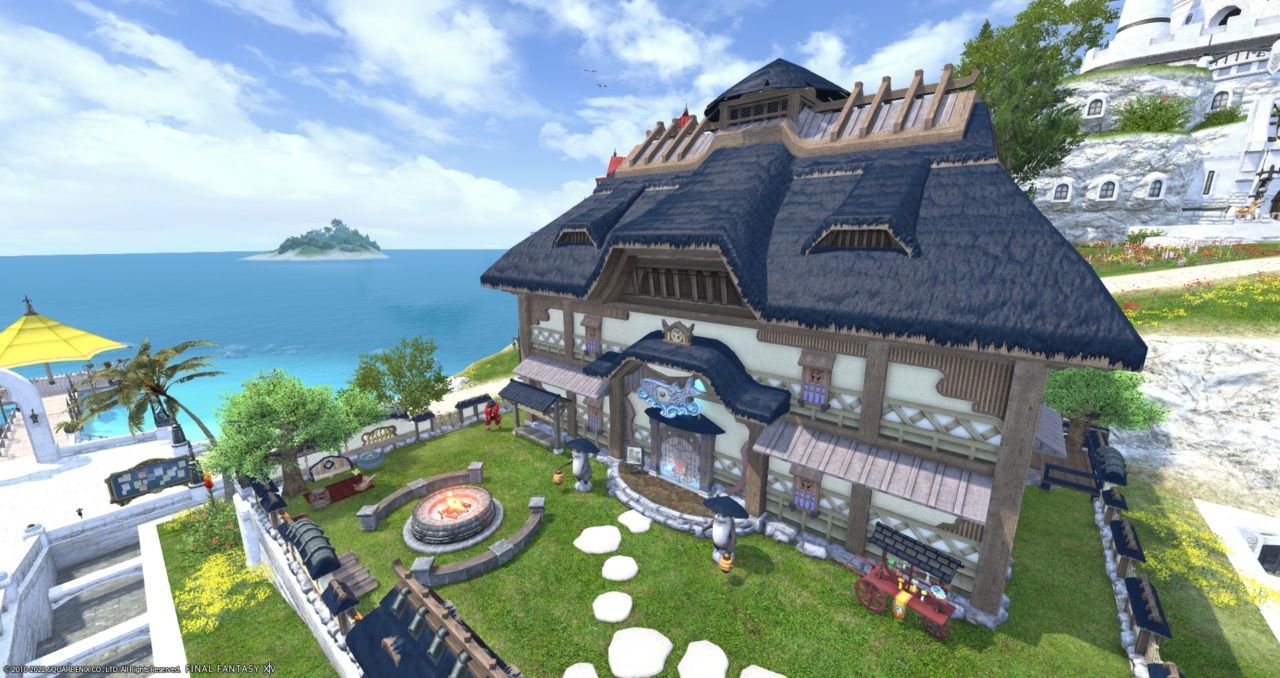 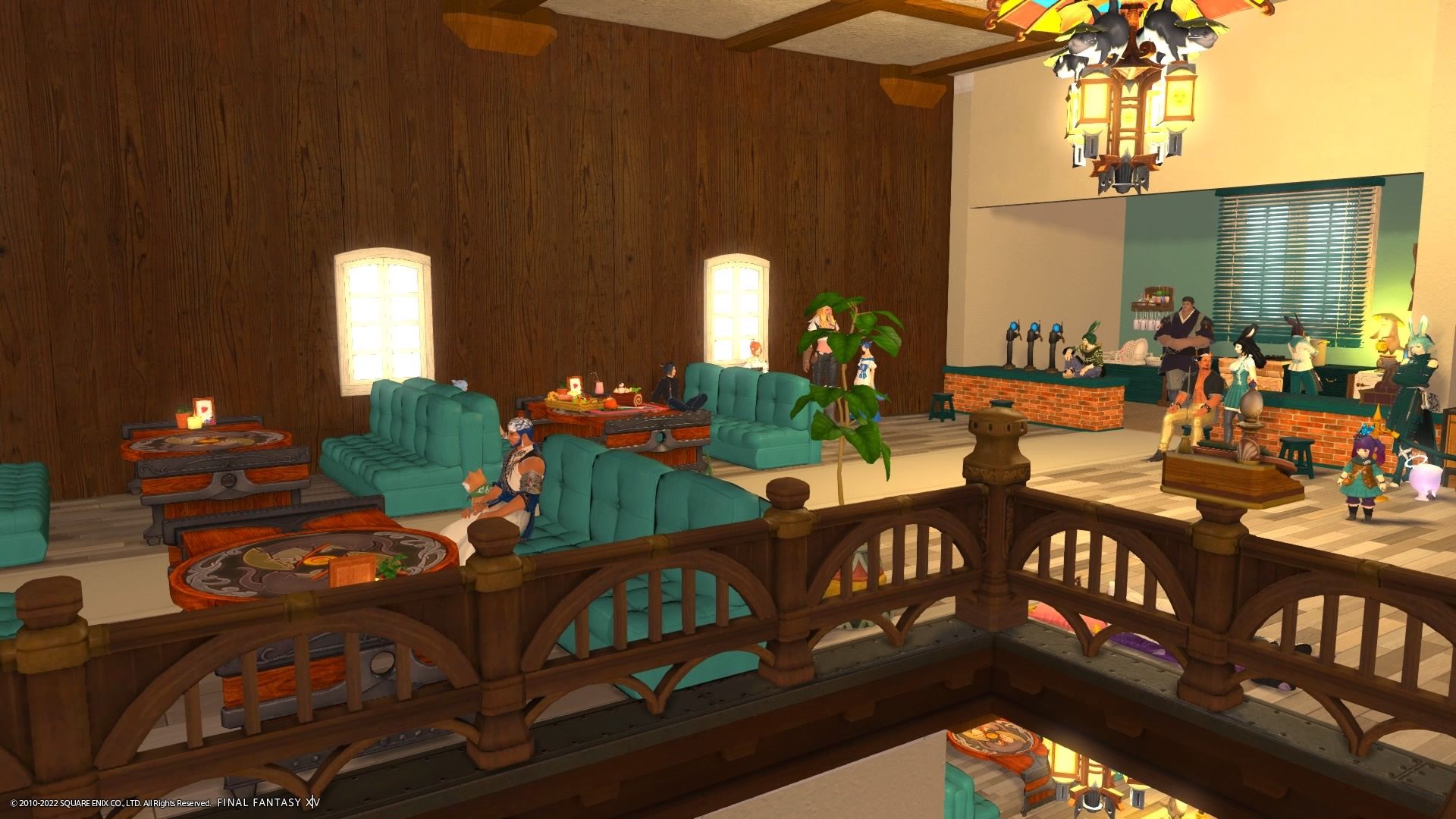 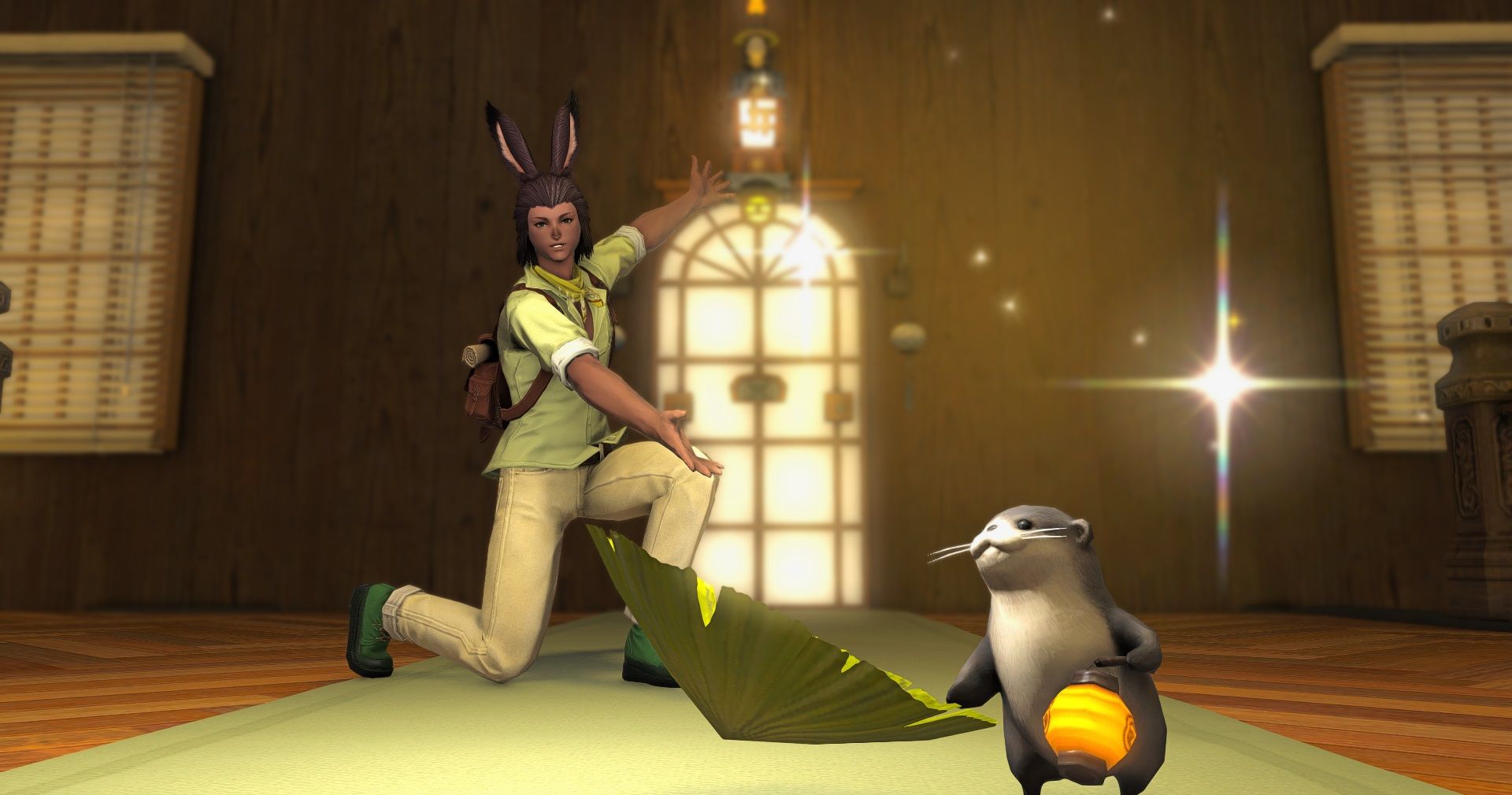 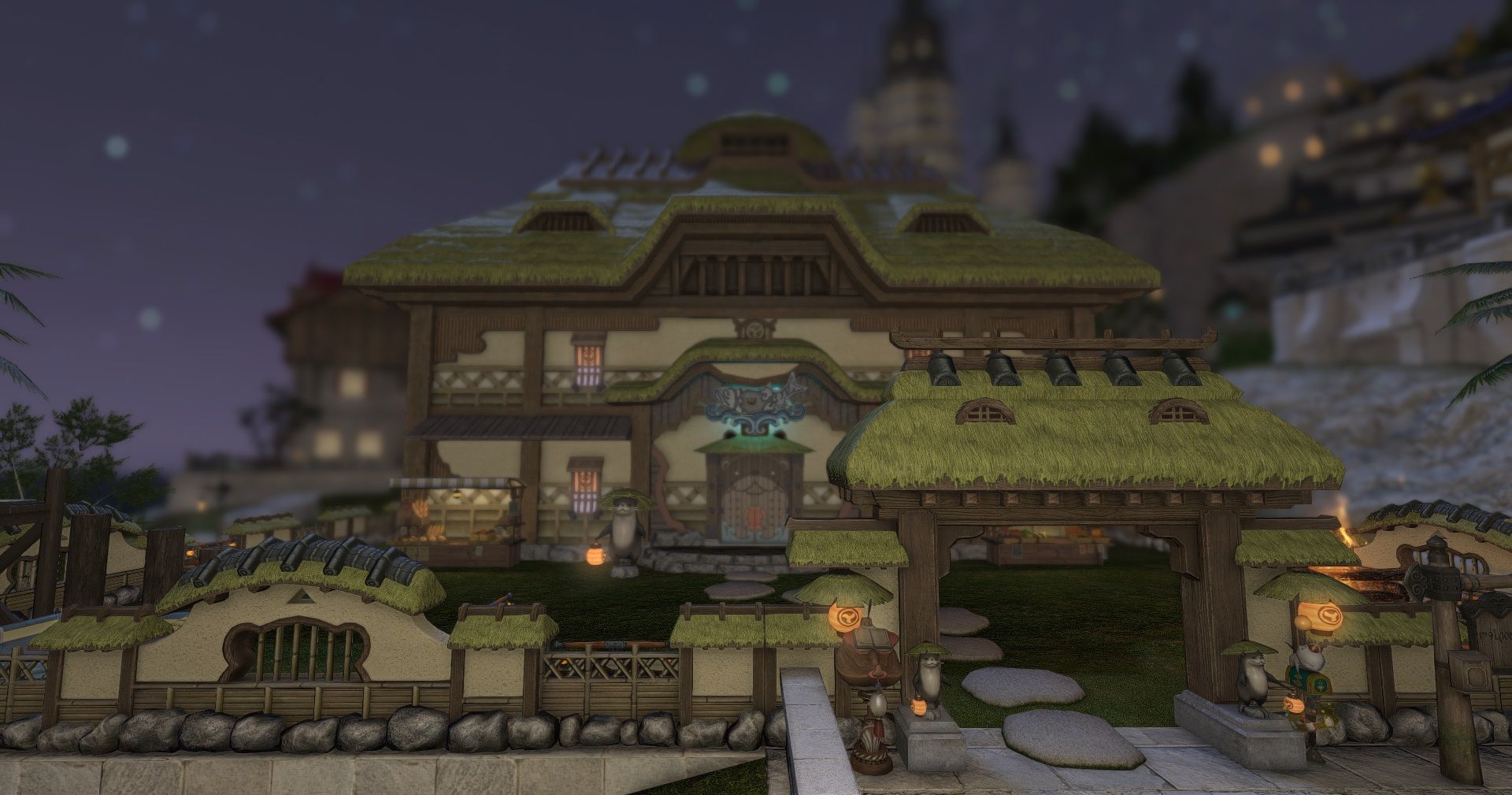 Otter by the Water is open Mondays, Wednesdays, and Fridays, from 12pm until 4pm ET. Aside from offering a very casual space for players to test out their roleplay skills, or just to hang out with friends, there is also a stage for anyone to use (providing they keep it SFW), which is a great practice gig for fledgling Bard bands without the pressure. The cafe also has a unique selling point — there are no fixed prices, instead choosing to offer a ‘pay-what-you-can’ policy.

Players can also choose the ‘Surprise Me’ option to be served something not on the menu, but that is tailored to be a little more personal with an RP touch. For example, if you ask Ahldfohc, a Sea Wolf Roegadyn, to surprise you, you’ll likely receive a tasty seafood dish. That’s one of the great things about Otter by the Water, when the staff isn’t busy playing host, they’ll happily RP with customers.

“I feel like Otter by the Water shouldn’t have worked for several reasons,” Safir says. “The daytime hours, the sort of laissez-faire approach to our menu and pricing, the fact that we want the venue to stay quiet and chill. Somehow that just created this thing that people wanted. The servers and regular guests at the Otter have even incorporated that into the venue’s lore. The pay-what-you-can model has been attributed to Safir not having a head for business. Somebody once made a joke that Safir just gives people signed napkins saying they can do whatever they want, so I thought, ‘alright, let me craft and hand out an item that can stand in for that napkin.’ It ended up being an HQ Perfect Cloth.

“Sometimes, people run through the house really quickly and dip into the bathroom to teleport out. Some people started joking that the bathroom was haunted. Others said the toilet must’ve had a hidden aetheryte inside of it. Then one of our staff, Enni, hosted a Family Feud-style game where the winning team would determine which theory was true. Team Ghosts won! And ever since then, it’s like a thing that gets passed down from regulars to newcomers: everyone jokes that the bathroom is haunted.” 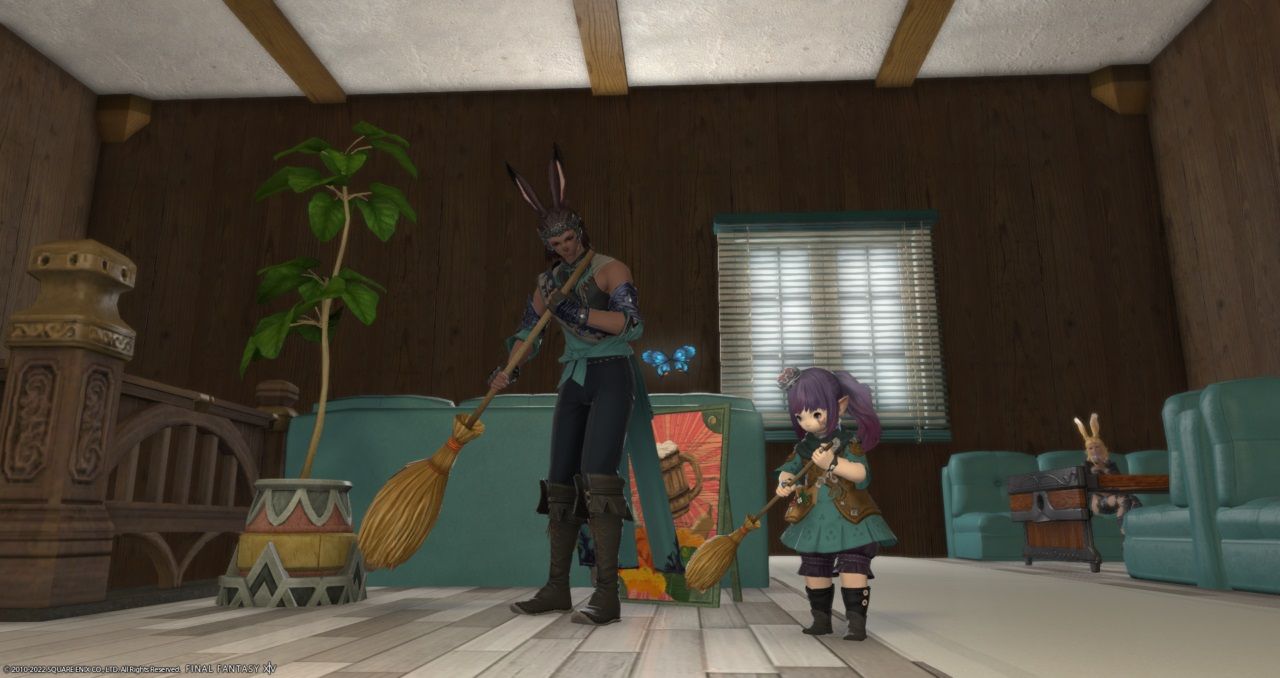 Safir tells me that Otter by the Water resulted from a series of happy accidents that started when he returned to FF14 during the start of the pandemic. After being absent since 1.0, he was pleasantly surprised to find a booming RP community thriving in-game.

“Pride events were canceled that year, and I live in NYC, so you know the dolls were devastated, but people were having pop-up Pride parties in Costa del Sol,” Safir tells me. “My birthday is in August, and since a lot of businesses in my area were still closed, my friends who play FF14, including new friends I’d made along the way, decided to take me venue hopping in-game. I was so inspired by some of their designs that I knew I wanted to get a plot of my own!”

Safir tried working at other RP venues but found that the commitment of working at FF14 nightclubs didn’t fit well with his unpredictable work schedule, which he also juggled with volunteering. In 2020, he managed to snag a small plot after a 14-hour click war, which he then upgraded to a medium plot a year later. 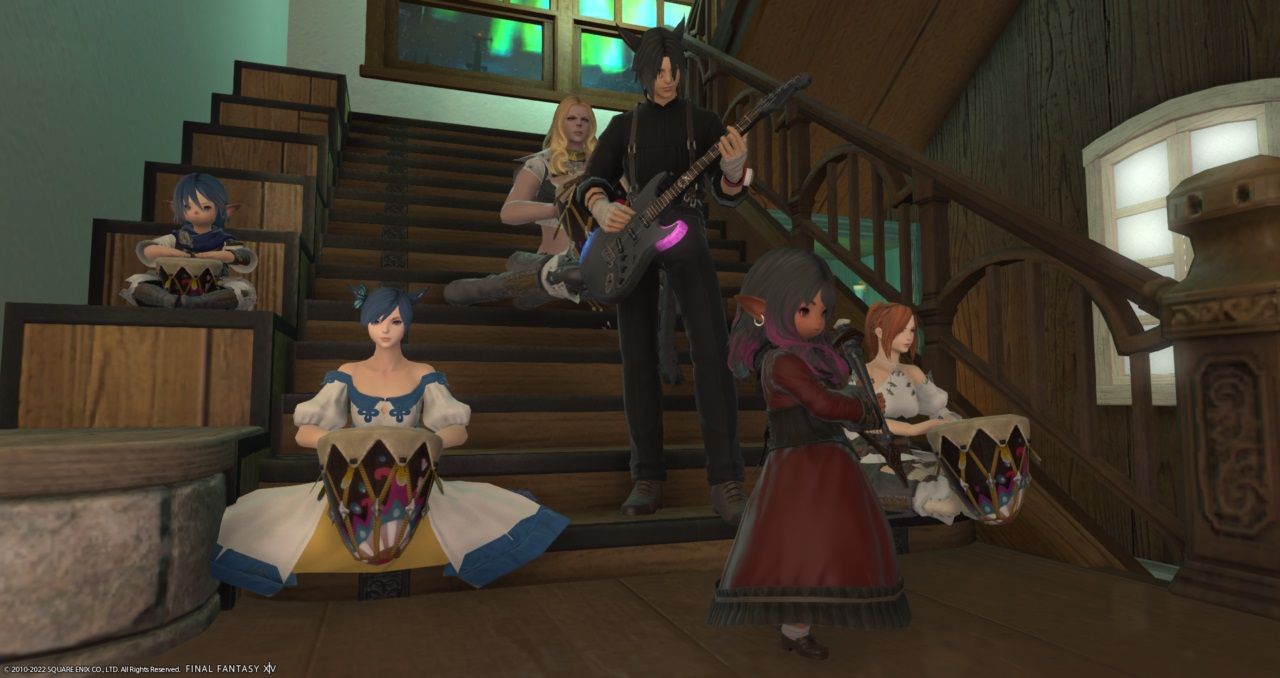 “My free company organized a trick-or-treat event where anyone who had a plot would hand out in-game treats to other players,” he tells me. “That was the first time I had a bunch of strangers over to my plot, and people were so nice! I realized that my favorite part of having a house in-game was creating something other people could enjoy.

“One thing I liked to do whenever I was working from home, or just enjoying some downtime, was sit in my plot and relax. Occasionally friends would see that I was online and stop to talk for a bit. In that way, it became like a virtual water cooler. Most people came by, talked a little, but were there to do what I was doing: just relax. Maybe they were waiting in a queue, waiting for a friend to sign on, etc. Or maybe they were also like me, working remotely and wanting a little interaction from time to time. Then I realised some people actually wanted a daytime venue!”

Safir started advertising his plot on Party Finder with a limited menu of tea and sandwiches, and that was how Otter by the Water opened its doors in March 2022. It was given the name based on its location in the Mist housing ward, right beside the docks, and is completely decked out in Odder Otter decor to fit the theme. The venue is designed to create a calming space, with lots of intentional use of space so guests can navigate around easily and enough decoration to avoid looking boring without looking cluttered. 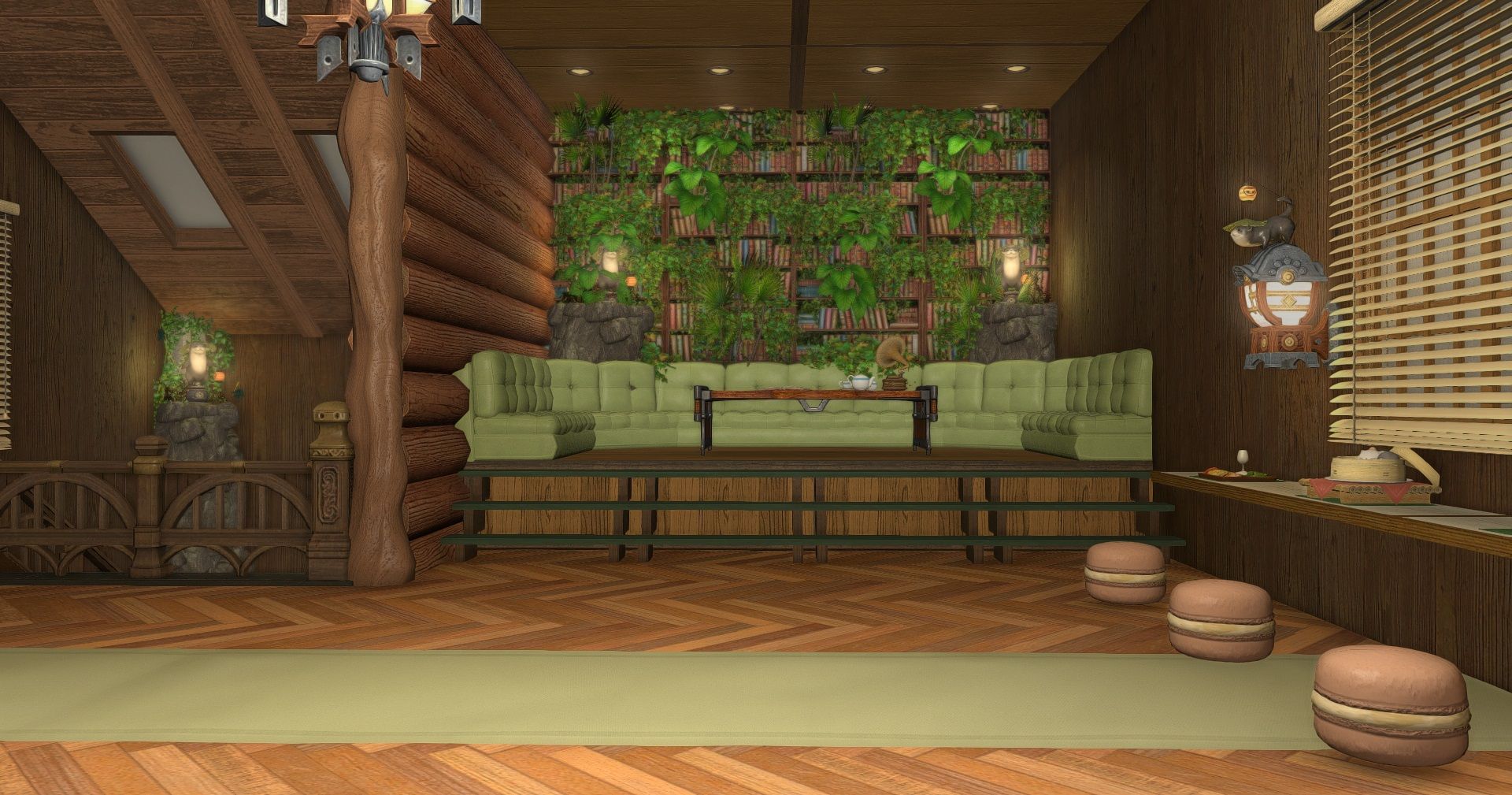 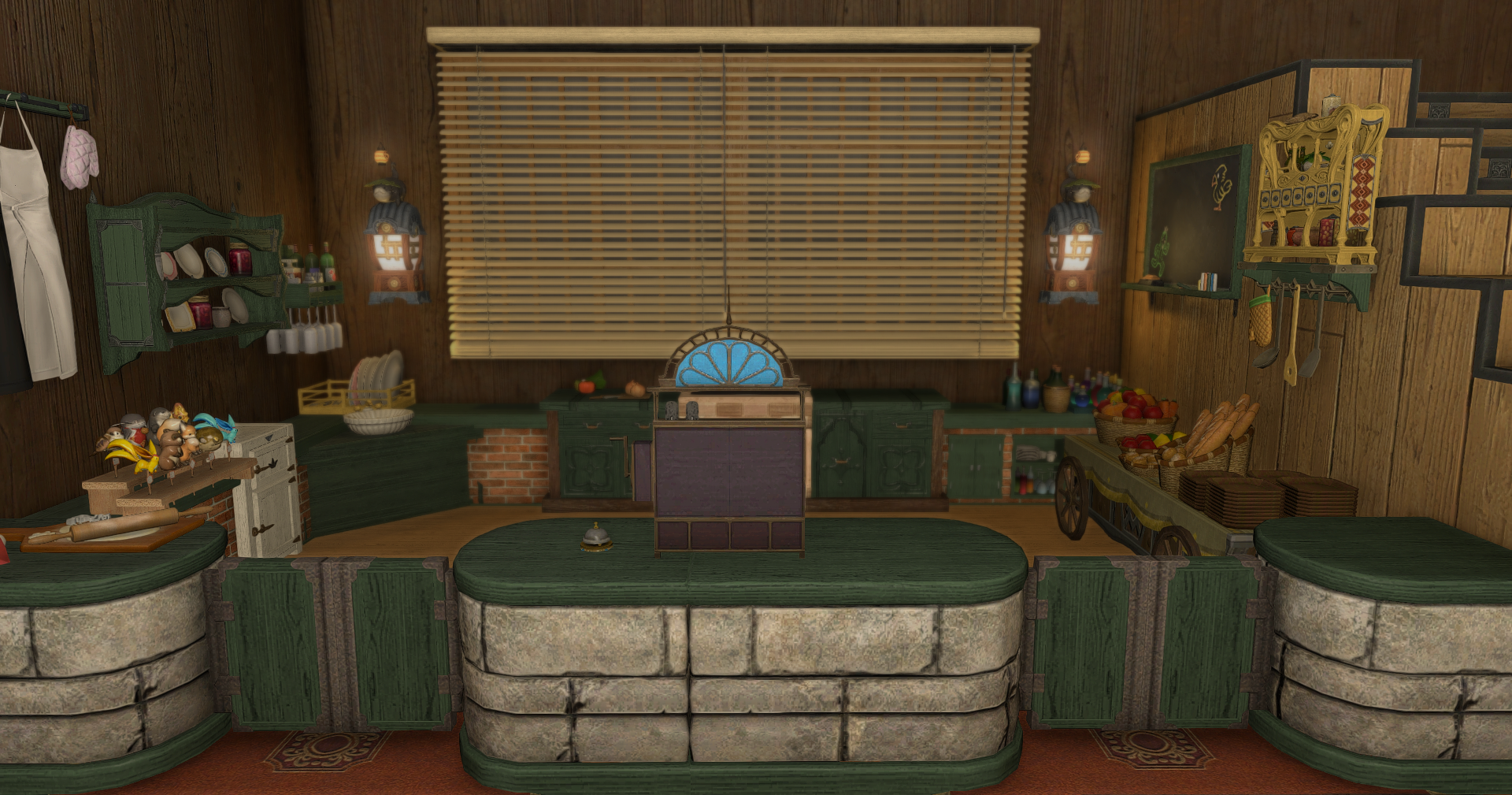 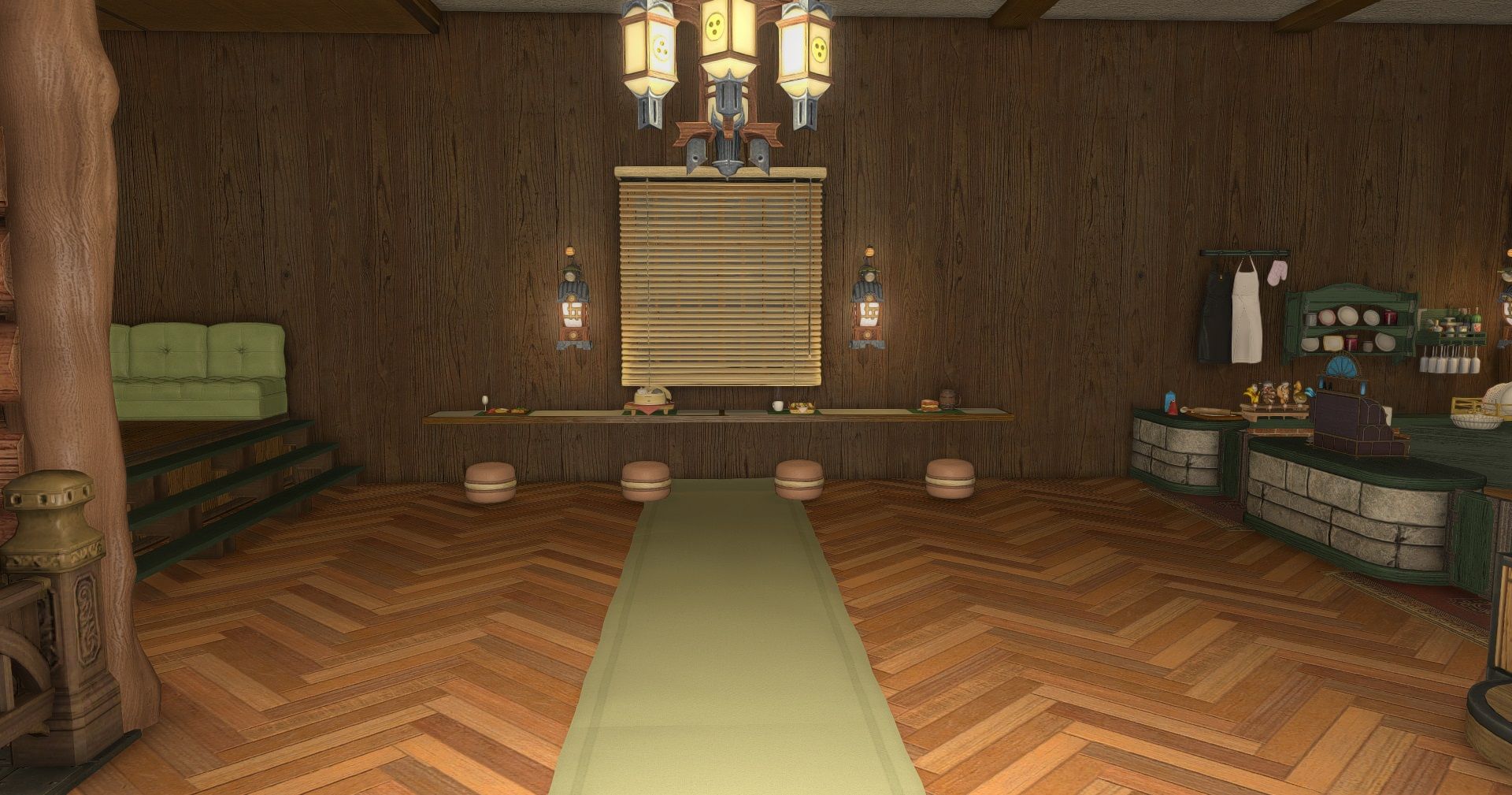 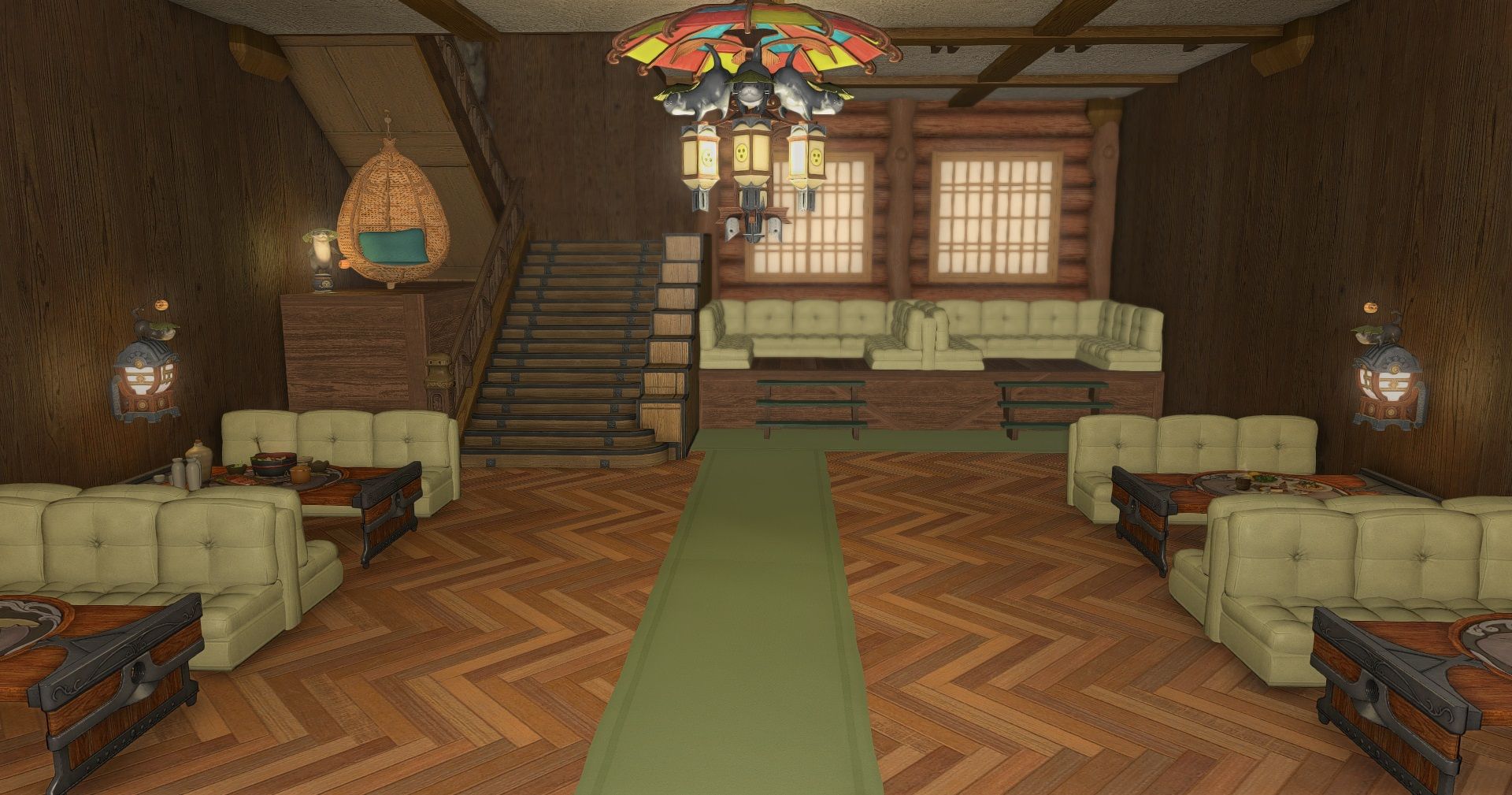 “As more people started to come, it became more than an AFK venue, although our original regulars still visit,” Safir tells me. “People come for some SFW roleplay or just to socialize, which has prompted the need for me to expand: creating a Discord, hiring staff, having a carrd, etc. A regular patron called us the Kings/Queens of Cosy, which I am 100 percent here for! I feel like that’s proof positive that I did what I set out to do in the first place.”

The team has grown alongside the venue. Safir currently manages the cafe with the help of an assistant manager and three servers: Enninisotera Papylon, Mashlae Urabe, Ausrya Daenala, and Markle Dreslin.

“I was brought here by a friend on an RP date and thought the place was so cute and had such a nice vibe, so I applied,” Markle explains. “It is a lovely place to AFK, chat, or RP, and completely SFW. Patrons can expect a very welcoming and chill vibe, and all the staff are fairly friendly and happy to help. There are baths upstairs for a more private hang out. And an open stage downstairs for anyone to play on. I have very much enjoyed my time as staff, it even gets me out of bed!” 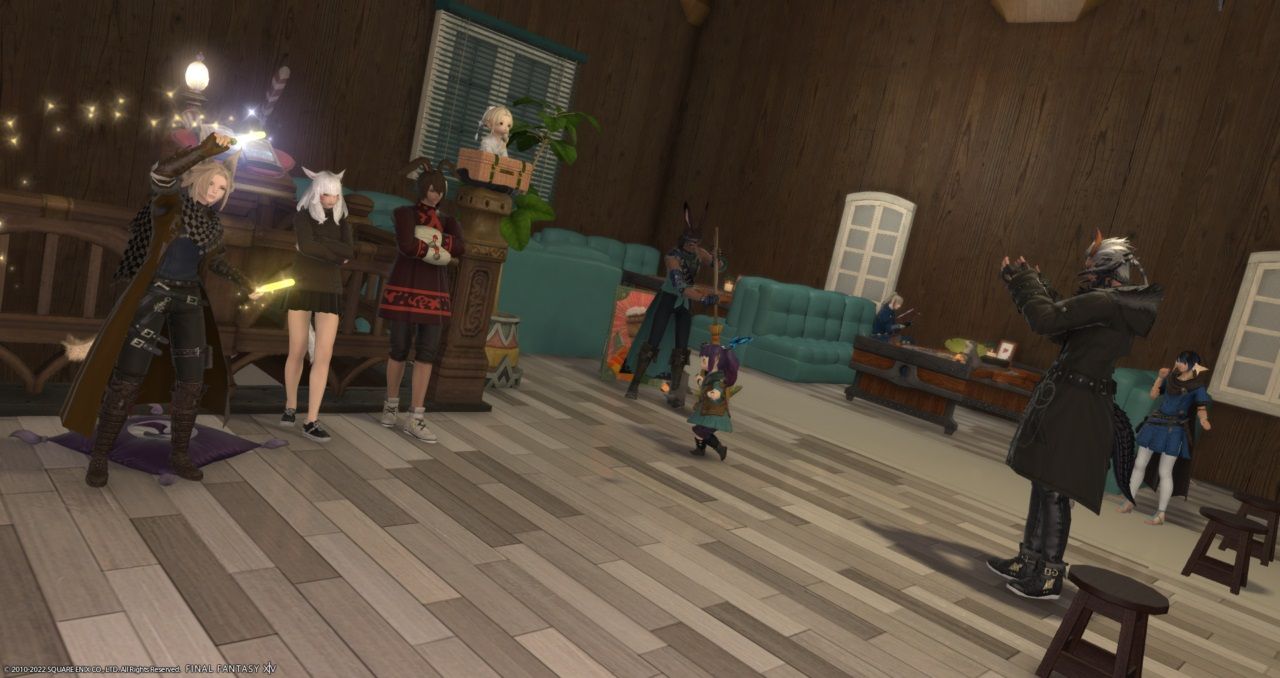 Safir has exciting plans for the future, and is hoping to hold a Halloween event. He’s currently reaching out to other venues and houses on Jenova, so get in touch if you want to be a part of it!

“I’d also like to work on some of the outside stuff that really made Otter by the Water feel like a community to begin with,” Safir says. “It’s not lost on me that some people visit us because they need a place to vent or someone to confide in, and it means a lot to me that they feel like they can do so. So I want to punch up our Discord server and make it a place where folks can keep the conversation going even when the venue is closed.

“Whether you’ve only been by once or you’ve become a dedicated regular, everyone contributes to the overall feel and atmosphere of Otter by the Water. There’s never a dull moment. Without our staff and visitors, I couldn’t say that. So thank you!”

You can keep up to date with Otter by the Water via their Discord and website.