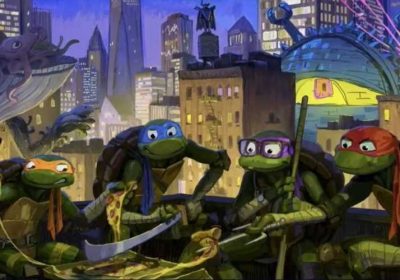 The final designs for the Turtles in Seth Rogen's Teenage Mutant Ninja Turtles: Mutant Mayhem have leaked online, giving us our best look yet at the film's art style.

Over the past few weeks, several planned toy lines and marketing partnerships for Teenage Mutant Ninja Turtles: Mutant Mayhem have popped up online, giving us a brief glimpse at the Turtles' final designs for the film, albeit from packshots that get blurry if you look too closely. Thankfully, Twitter user lilbastard has managed to find high-quality versions of the renders used in marketing, finally letting us see the designs in full detail.

Although the original images showing the Mutant Mayhem renders have been taken down after a copyright strike from Paramount, lilbastard made a fake movie poster using the renders, which is still up at the time of writing and lets us take a look at the new Turtles. What's immediately noticeable is how bright and animated all four of the Turtles look, with comparisons to Into the Spider-Verse instantly being made.

First up is Leonardo, who looks the most unchanged and classic of all the Turtles, being a normal size and weight, having no extra additions to his gear or look, which perfectly suits his role as the sensible leader. Raphael, meanwhile, sports the same durag look that he's had since the Michael Bay films, while also looking a bit more buff than the rest of the Turtles. He's not absolutely massive here though, unlike in Rise of the Teenage Mutant Ninja Turtles.

Next up we have Donatello, who once again has been made the lankiest of the bunch and is equipped with a pair of glasses, headphones, and a phone to make sure we know he's the smart one. It's a little overboard, but it's worth noting that they seem to have removed the gap tooth look he had in the concept art, which TMNT fans weren't so hot on when it was first revealed.

Finally, there's Mikey, who has been made much shorter and stubbier than he usually is to accentuate that he's the youngest. Renders for masks of the Turtles let us take a closer look at Mikey's face, which shows us that he's actually sporting braces in this iteration. This is interesting, as the concept art released last year showed Leonardo wearing braces instead, which now seems to have been given to Mikey.

Alongside the designs for the Turtles, renders for each of their weapons were also shared online. TMNT fans will be happy to know that Raph has finally gotten his sais back, after switching to tonfas for Rise of the Teenage Mutant Ninja Turtles. Some other interesting details are that Mikey and Donnie have both customised their weapons with stickers, with Donnie's even having a little reference to Sailor Moon.