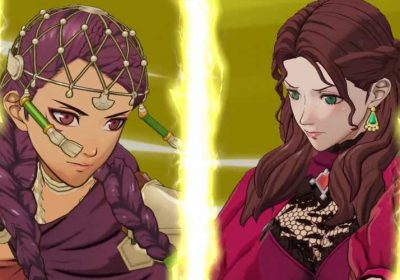 You might have never pictured yourself playing a Fire Emblem game with your best bud, but Fire Emblem Warriors: Three Hopes allows you to do just that! Once you reach Chapter 4, two-player co-op is unlocked. From that point on, whenever you enter a battle, a second player can join the fray after Player One presses the "–" button, allowing your friend to connect a controller.

Sadly, this is only split-screen local co-op, so there will be no conquering Fódlan with your online pals. However, getting a Player Two to hop into battle with you is a huge advantage in battle, and might just turn the tides in your favor. 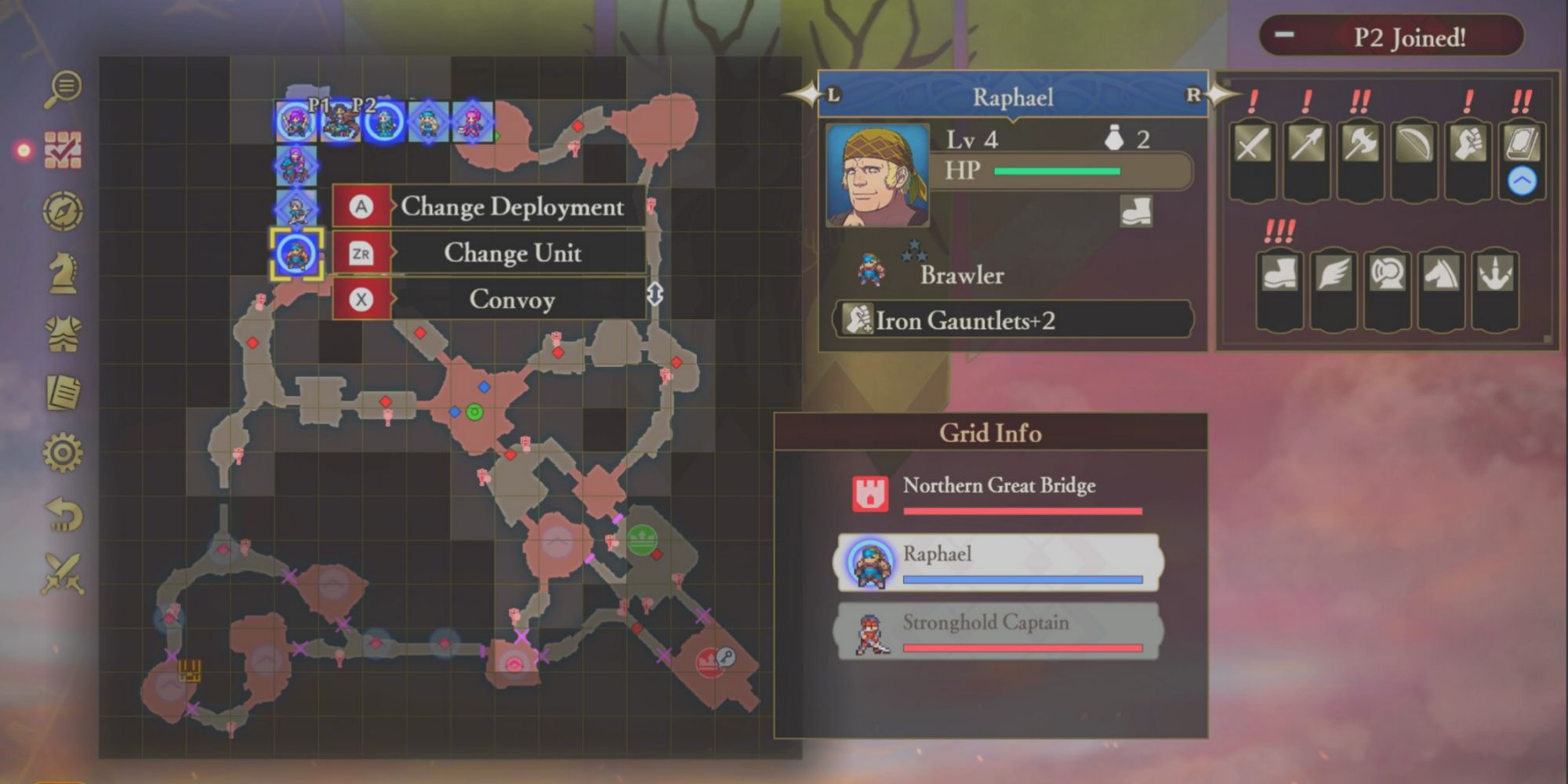 It might be tempting for you and your friend to pick your highest leveled characters and just hack-and-slash your way to victory. If you want to be strategic about it, however, this is the perfect opportunity to play some of your low-level units.

In general, your units are more likely to be successful in battle and therefore level up if you are at the helm. With two people controlling units, that only increases the odds of boosting your low-level characters.

Split Up Across The Map 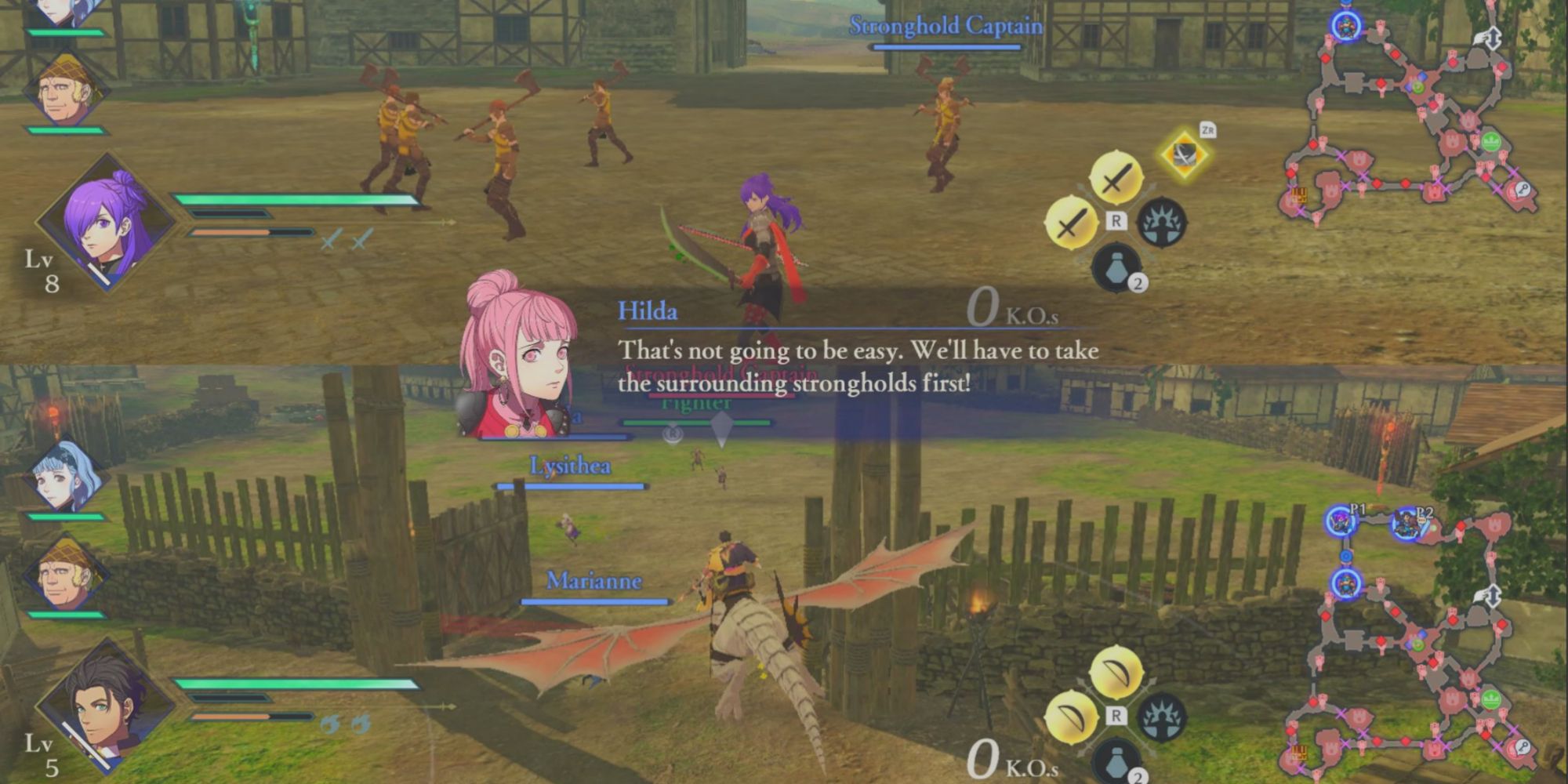 Yes, you might be playing together, but if you and your Player 2 want to stand a chance of winning tougher battles, you will also need to learn to play separately. Units that you are actively controlling will generally always have a certain advantage over units that are on autopilot, so make use of that by tackling different areas of the map.

By splitting up, you can cover more ground and get objectives done quicker. Consider having one of you handle the main mission while the other takes on the side objective! 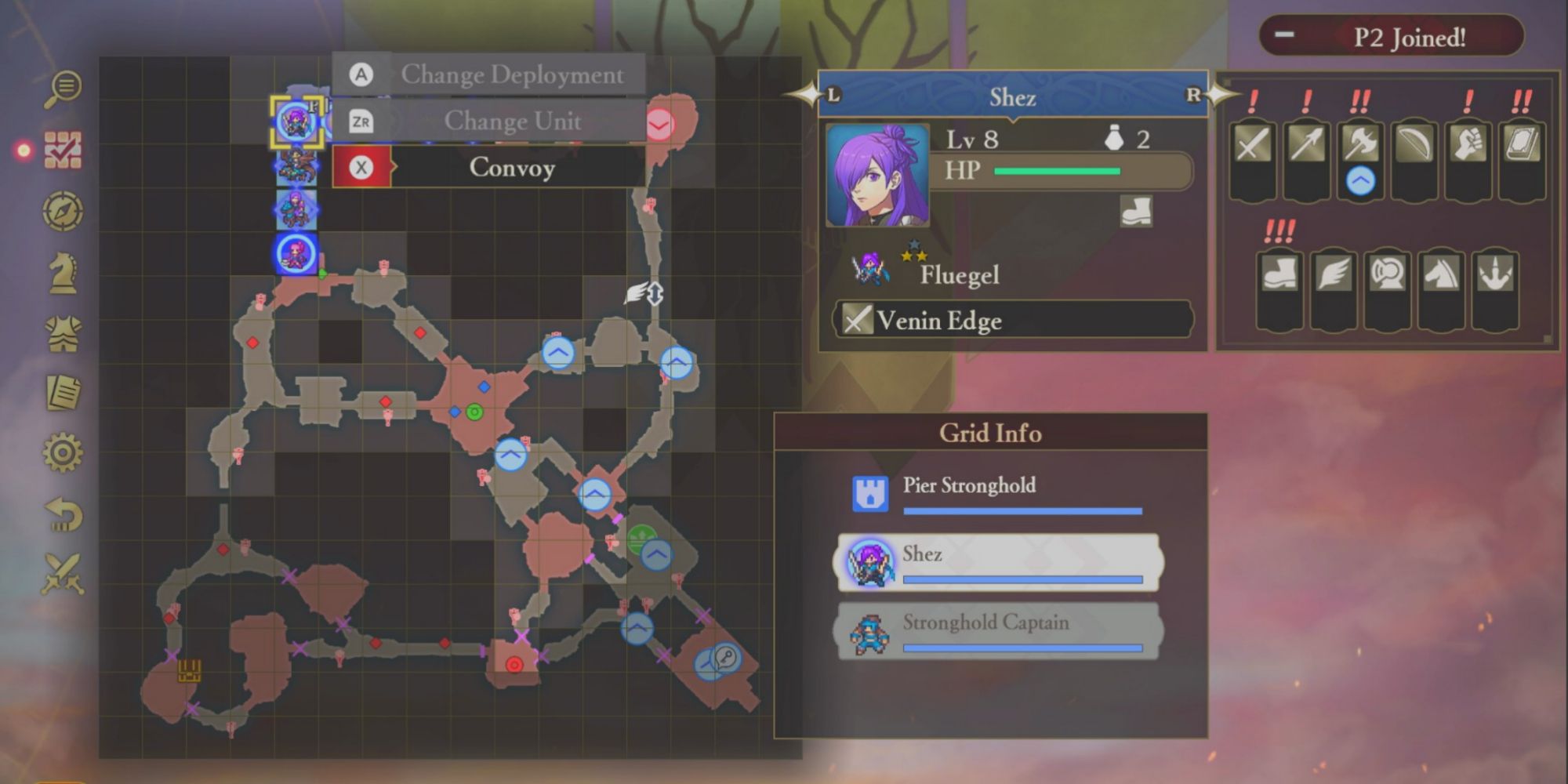 Sometimes in a larger battle, you will have the opportunity to pick which units are playable and which ones will be on autopilot. When playing one of these battles with two players, be sure to choose playable units that have an advantage against enemy NPCs.

You can select which units you want to play as by placing them in the blue circles on the battle map. This can be done by either pressing "A" on characters already on the field to switch a character into the "playable" spot, or pressing "ZR" on the selected spot to choose a new character.

Switch Up Your Playable Character 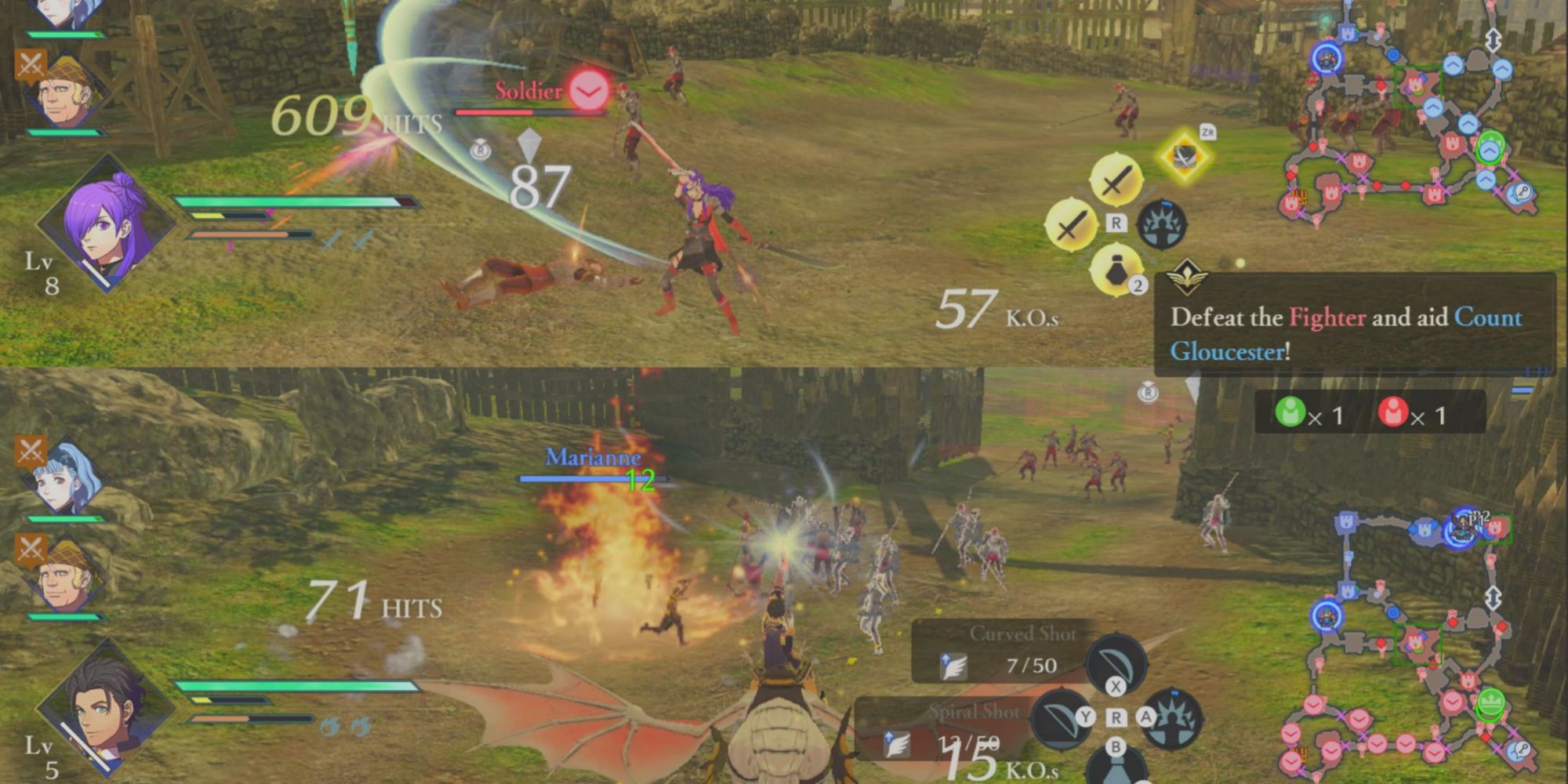 It might feel much more fluid to vibe together, running around the map as your favorite characters, but be sure to take advantage of your full character roster. During the battle, either of you can switch to the other two playable units by pressing up or down on the D-pad. However, you cannot both play the same character.

Switch up the unit you are playing as it helps you take full advantage of your roster. It is also key to keeping all your units around the same level. 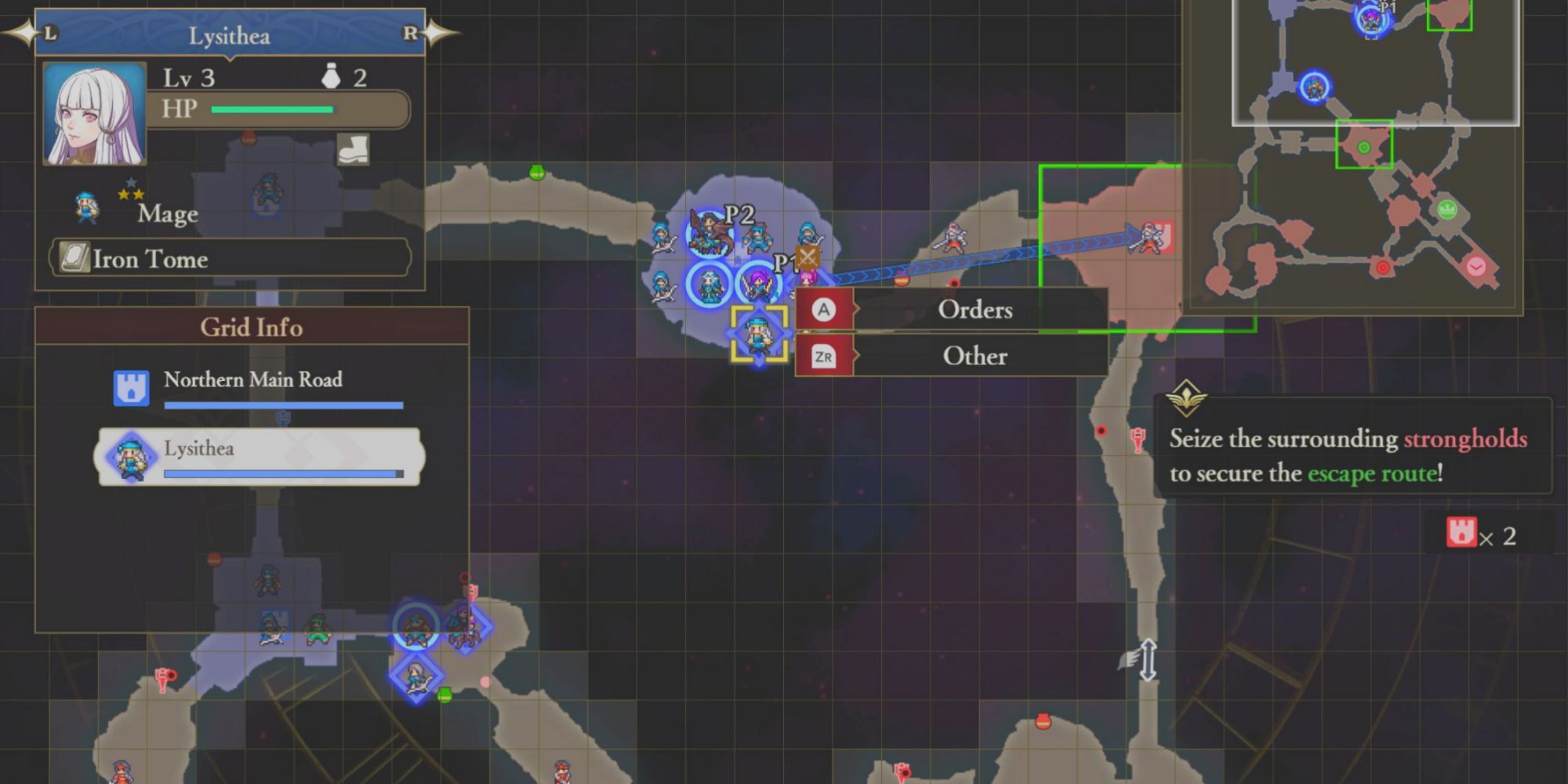 In the heat of the battle, try not to forget that you have other units as well. Open the battle map frequently to send out your ancillary units to attack other parts of the battlefield or join you in taking on an enemy.

If you forget to give your extra units orders while in battle, they will autopilot themselves, generally attacking whatever enemy they come across first. Even if that enemy is a tiny little Base Captain instead of the horde of Pegasus Knights that just popped out of nowhere.

Give A Warning Before Opening The Battle Map 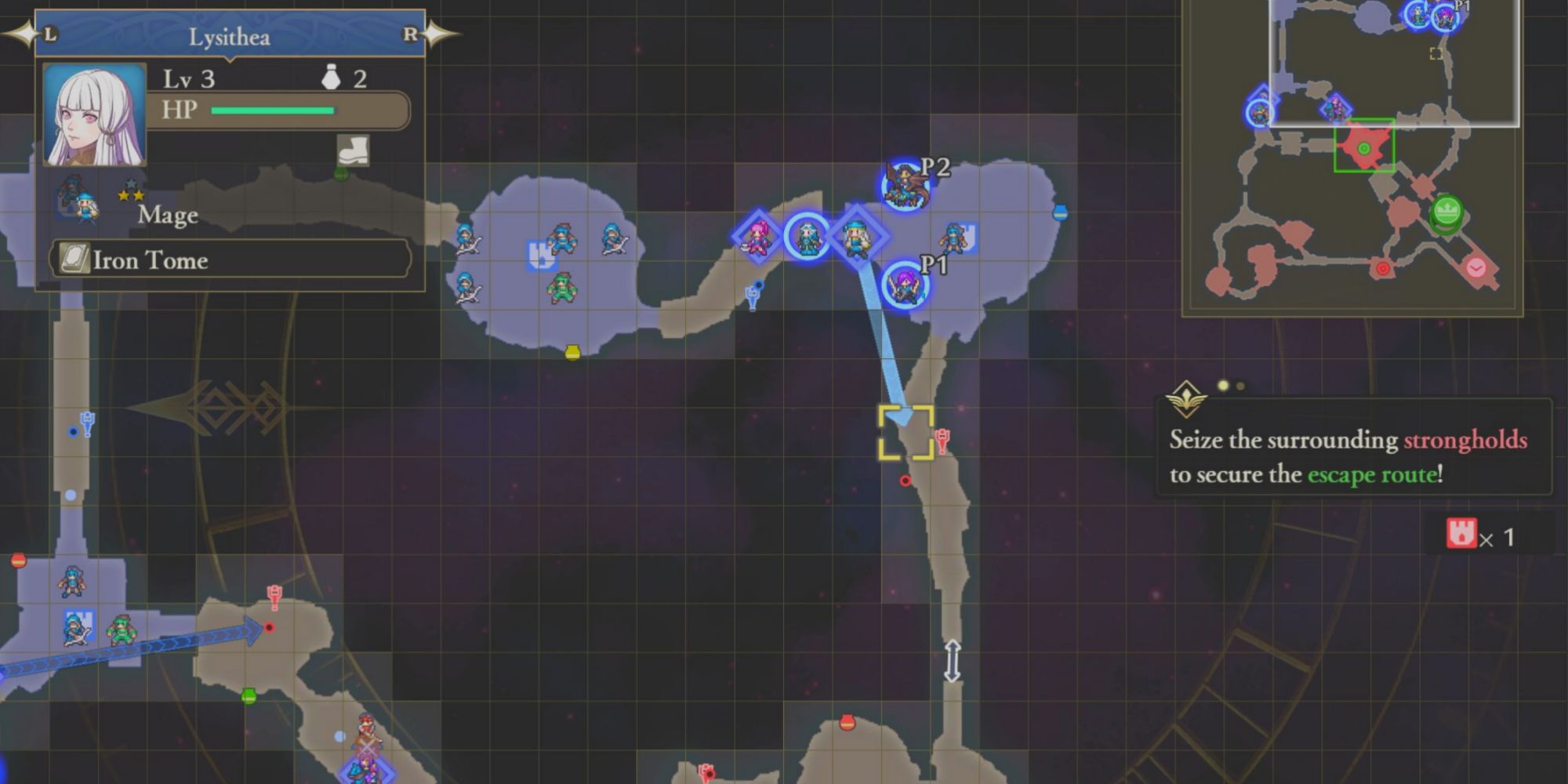 While opening up your battle map to assign orders is key to winning battles in Fire Emblem Warriors: Three Hopes, you might want to give your Player Two some warning first. Either player can open the battle map during a fight by pressing "+".

However, even though this is a split-screen co-op, opening the battle map takes up the entire screen and pauses the battle. To avoid any confusion, always communicate when you are about to open the map. 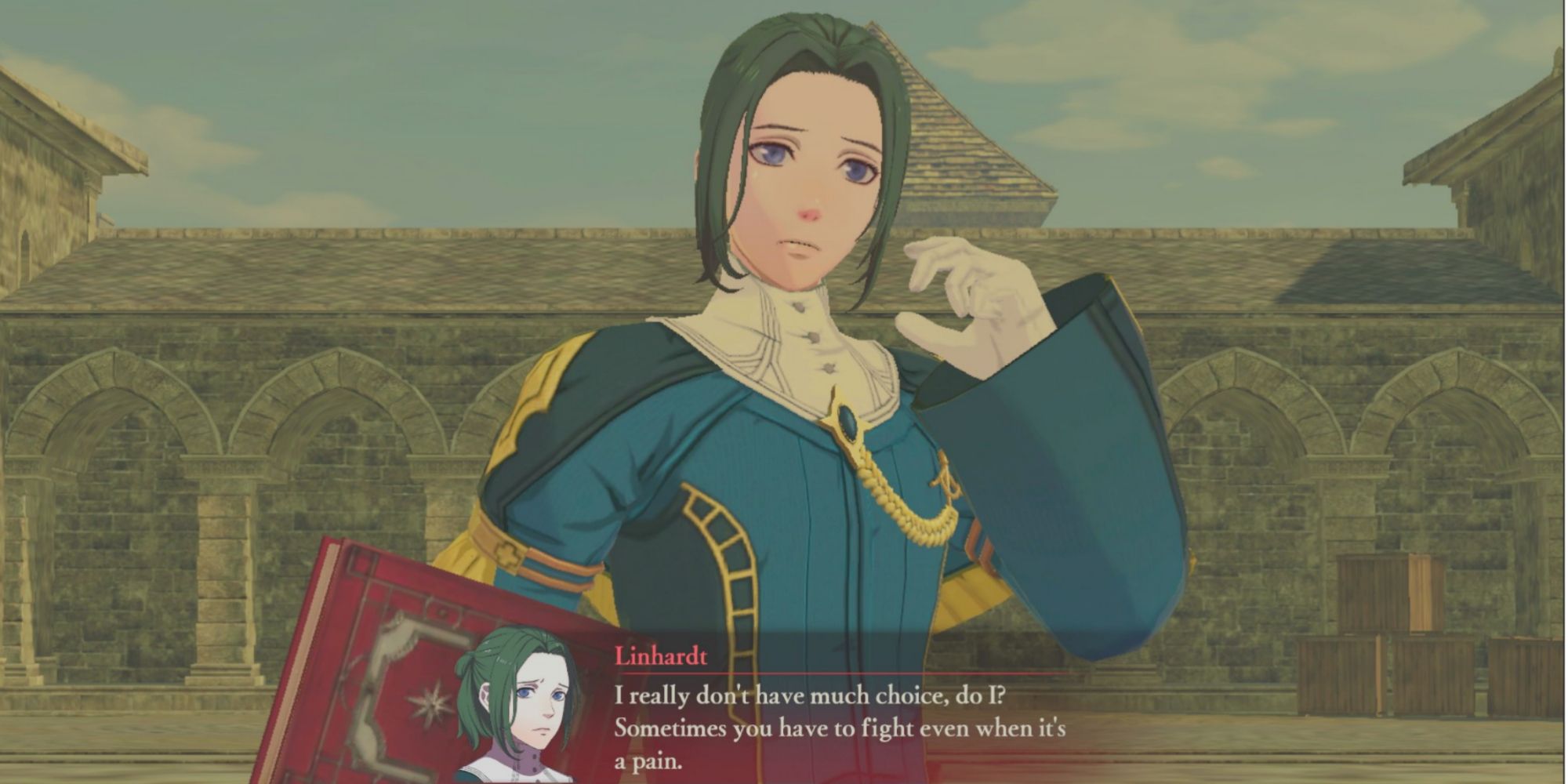 Splitting up the map is always a good idea when playing co-op in Fire Emblem Warriors: Three Hopes, but as the battle progresses, you should consider coordinating an attack together on tougher enemies as they appear.

Teaming up for more challenging enemy units can help wrap up the battle quicker, nabbing you an "S" rank", and potentially avoiding the need to order an "all-out" attack from your units.

Assign Units As Your Adjutants 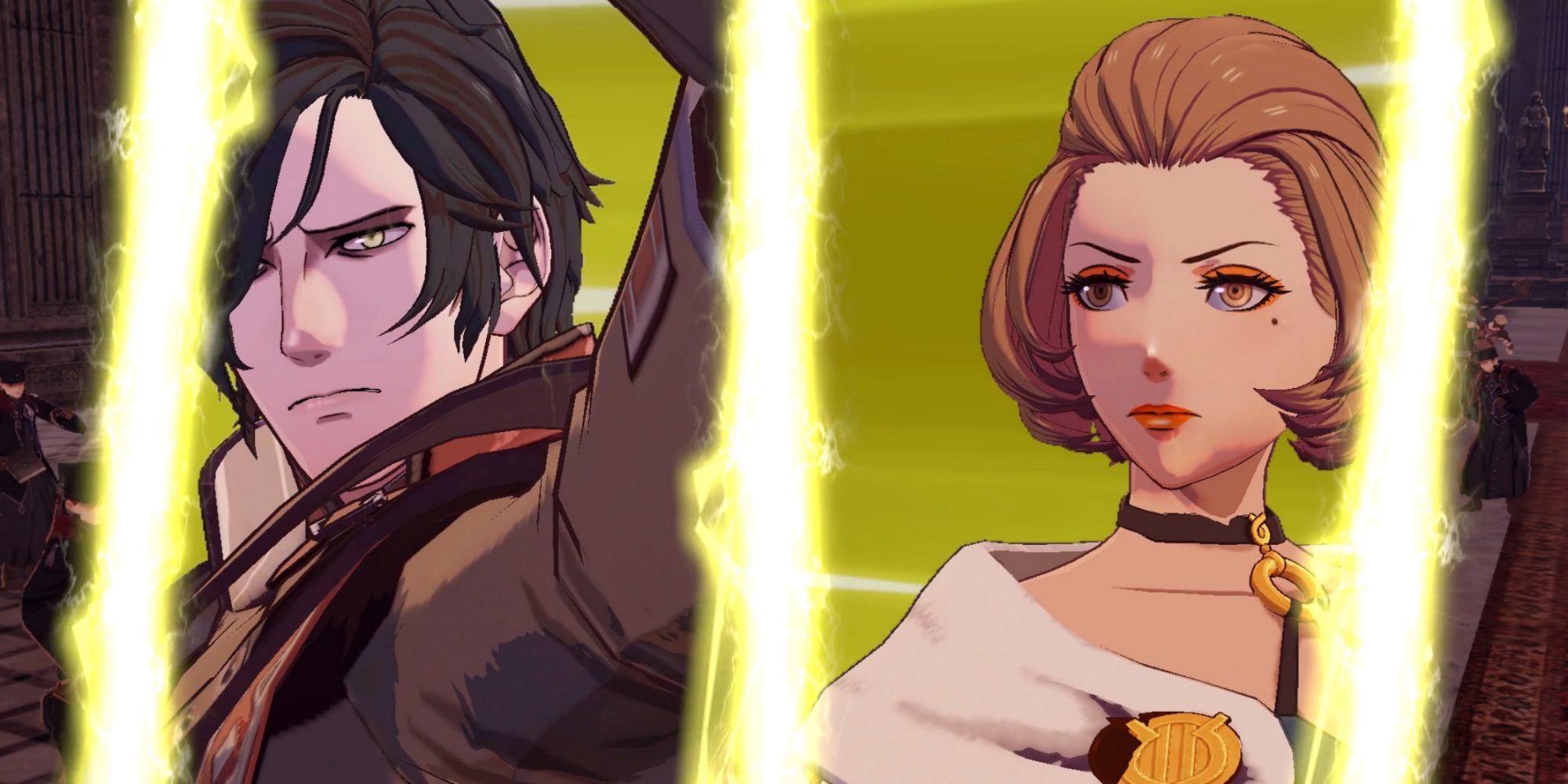 Maybe you want to level up your units strategically, but you do not particularly feel like constantly switching between characters while playing with your friend. You can get around this headache by assigning your other playable units as an adjutant to the playable character of your choice.

When you assign an adjutant to an active character, it protects them from harm while still allowing them to sporadically participate in battle while giving your active unit a boost. This is a great move to make especially on smaller battlefields that do not require characters to cover a lot of ground.

Split Up To Gather Resources 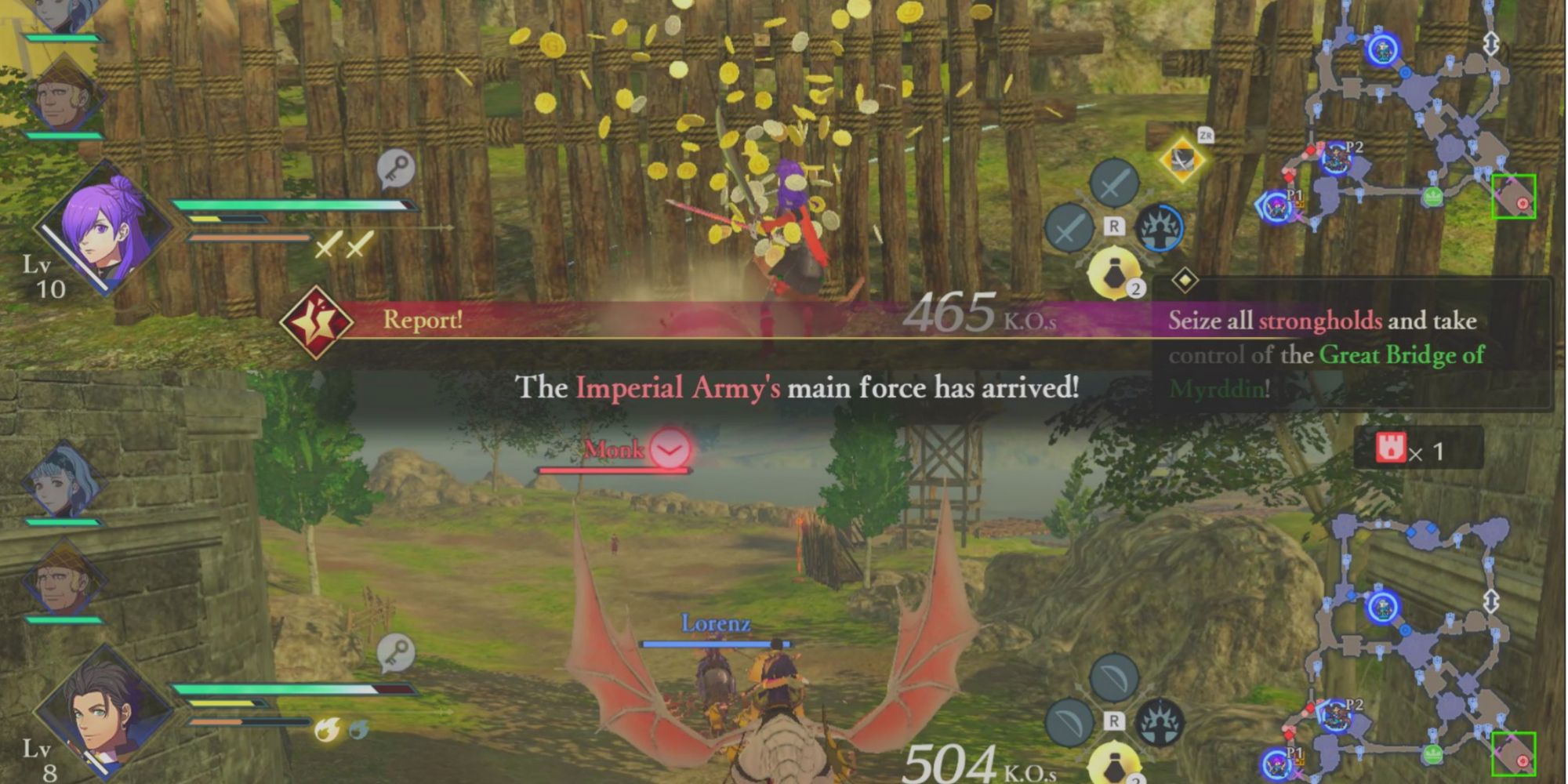 It can be a struggle to get all the resources on a battle map without running up the timer and ruining that perfect "S" rank. With two players, you can kill two birds with one stone!

Before you complete the final main objective, have one of you run around the map and smash any remaining pots. Look out for red and purple pots especially, as these give gold or Weapon Durability respectively.

Play On A Big Screen 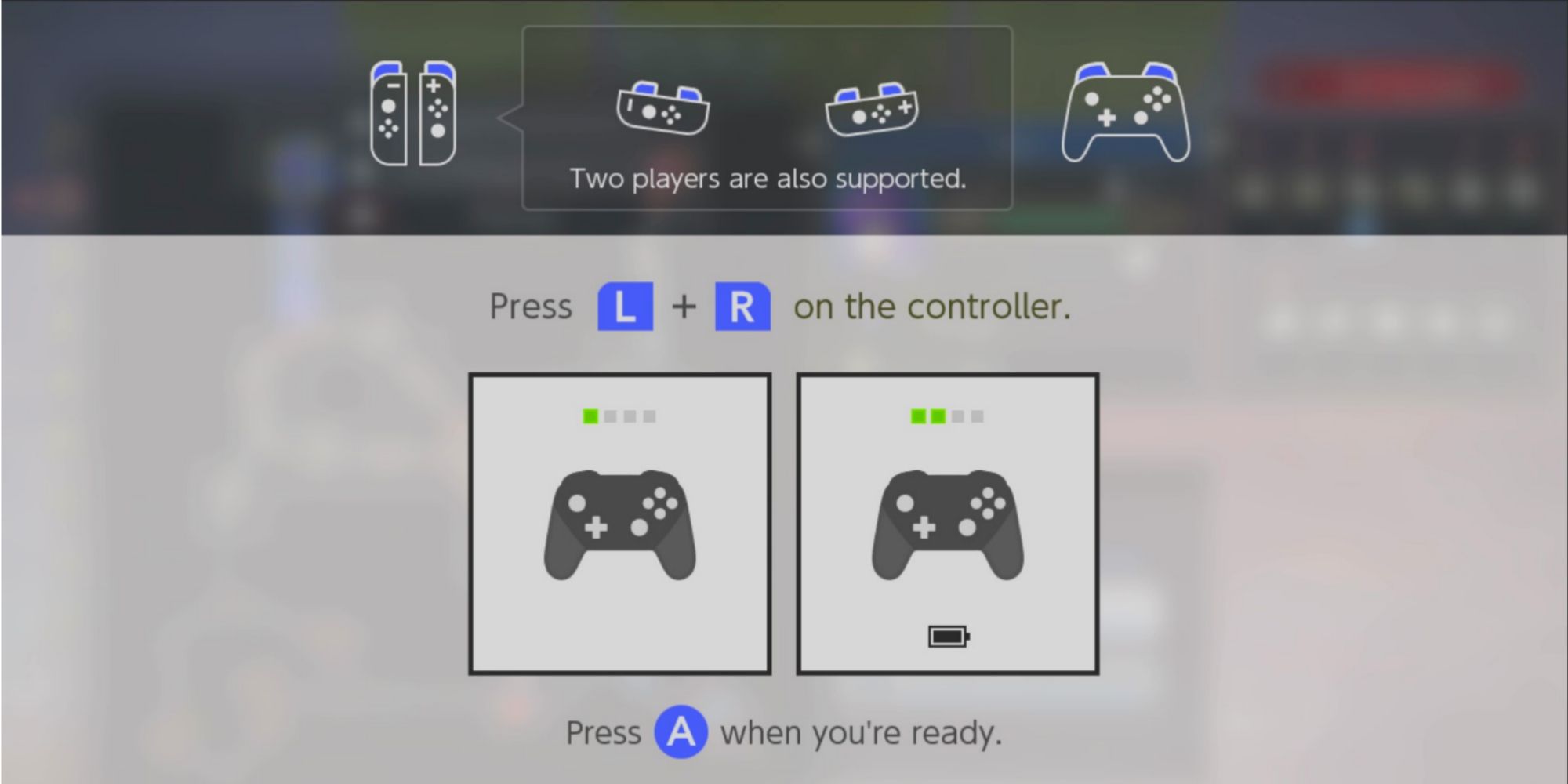 Playing split-screen is difficult at the best of times, but it is particularly tough to play Fire Emblem Warriors: Three Hopes with the screen split. During a battle, there is quite a lot going on at any given time, plus tons of UI crowding the edges of both players' screens.

If you have the option available to you, play co-op together on a large monitor or TV screen. It sure beats crowding around your tiny little Switch and squinting to see your character on the screen.