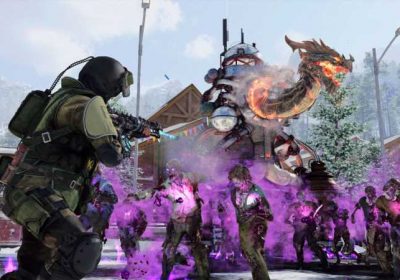 Black Ops Cold War Zombies is getting a big mid-season update on May 20, and it will apparently introduce fishing to the game’s Outbreak mode.

As spotted by ModernWarzone, the Zombies patch notes details some of the things coming to the game in the new update. Amongst these notes is a peculiar one saying, “Fishing (!!)”.

No other details are given in the patch notes like why you’d want to fish, but it’s confirmed that it’ll be coming to the game’s Outbreak mode. For those who are unaware, Outbreak is set on a much bigger map than previous zombies modes, so it’s likely that fishing will just be a mini-game of sorts. Knowing Zombies and its love of easter eggs, expect it to play a role there.

Speaking of easter eggs, Treyarch also confirmed that the first story-based easter egg will also be coming as part of the new update. An image on Twitter shows a stone Monkey Bomb, and tells players to “look for my mark”. Other things being added to the Outbreak mode include new documents, artefacts, and transmissions to find, alongside an Orda Encounter World Event.

The update will also be adding “Cranked 2: No Time to Crank” as a limited-time mode to the round-based maps in the game, alongside the Silverback Slideways bonus map for Dead Ops Arcade 3. Beyond that, a ton of weapons have seen balance changes and players can now bring in custom blueprints into the mode.

One of the more exciting bits of news is that Treyarch also revealed that Season 4 will see the next round-based zombies map, which will apparently take place after the events of Season 3. ModernWarzone notes that the map is rumoured to be set in Berlin.

Black Ops Cold War Zombies isn’t the only Call of Duty mode that is having new content released. Earlier in the week, it was confirmed that Rambo is coming to Warzone and it looks like Die Hard’s John McClane might be coming after him.