Forget Game of Thrones, let me play this dragon simulator 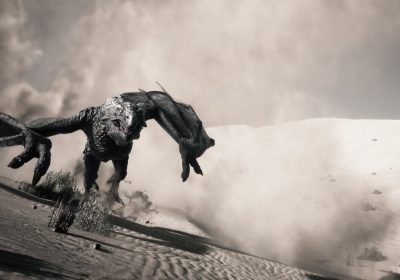 Sometimes the most striking concepts come when tinkering throughout development. Such is the case with Fouad Torriss’ Wyvern Simulator. The idea started as a simple exercise to create a working controller for a non-human character, but then ended up being a stunning example of a simulator where you run around as a dragon. It was so popular that Torriss ended up releasing a demo after so many people expressed interest.

We have terrifying dragons and more in Cool WIP, Polygon’s weekly roundup of eye-catching clips, and screenshots of works in progress. Each week, the Polygon staff scours the internet for the most interesting games still under construction, to give you a sampler of the coolest up-and-coming projects.

This week we have a pet simulator where you take care of bugs, a giant sleeping panda, a narrative adventure that reminds us of old-school JRPGs, and the most impressive Spider-Man clone.

Tame dragons and play as them in Wyvern Simulator

Wyvern Simulator allows you to glide through the world as a dragon. Developer Fouad Torriss posted a clip of a wyvern (a specific kind of dragon with a diamond-shaped tail tip) running through a desert. It’s not a fully fleshed out game, but the animation of the beast’s body undulating as it runs really brings the creature to life. If it looks cool to you, you can download a demo for free now and keep up with development on the Twitter account for the game.

This game is really buggy. No, not that kind of bug! It’s literally filled with insects. Bugaboo Pocket is a pixelated pet sim where you take care of bugs. A short clip posted by the developers shows that you pet and feed your bugs, as well as decorate their habitat. I’m not going to lie, I’m not really a bug person, but these are some dang cute critters. Bugaboo Pocket is currently being made by a team of four developers, and you can follow their progress on the game’s Twitter account here.

I want to wake up this sleeping panda

Rainboy is a bright and cheery platformer from Seallliogames where you play as the human manifestation of a rainbow. A clip of the game shows an encounter between the main character and a giant panda sleeping in the woods. The character shouts about how fluffy it is, and floating hearts burst out as you pet the panda. Who doesn’t love a good panda snuggle? Rainboy doesn’t have a release date yet, but is listed as coming “soon” on Steam. You can follow updates on the developer’s Twitter account in the meantime.

Developer Gibb0 is remaking a Spider-Man game in Unity. On Twitter, they posted a clip of Spider-Man doing a double web swing, one where the hero uses both arms to shoot webs. The clip isn’t for any licensed game and is very early in development, but is impressively smooth for a fan-made project. There’s no release date for this work, but you can keep up with their work on their Twitter account.

Developer Sev, has been working on her interaction fiction game part-time as she goes to university. But don’t be fooled; her game, Delphinium is way more fleshed out than your random side project. The game blends a Minecraft-esque looking world with the style of old-school pixelated graphics from old JRPGs. That, and the golden light that envelopes the world, makes for a recognizable style. Recently, she posted a clip that gave a brief look at the game’s fishing system. Sev hasn’t announced a release date yet, but you can follow the development process closely on her Twitter account.