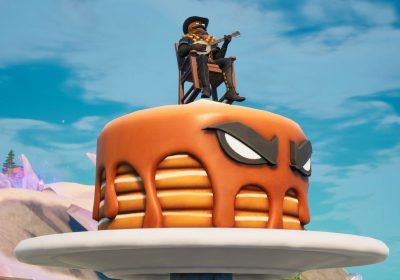 Fortnite Chapter 2 came to an end on Saturday with what might well be its biggest season-ending event yet. Players battled The Cube Queen and her legion of monsters before being led down into the bowels of the island by The Foundation, who turned out to be The Rock. In order to rid Fortnite of The Queen and the motherships lurking overhead, The Foundation and other members of The Seven flipped the island upside down.

That means there's now an entirely new island to explore to kick off Chapter 3, except the new island isn't entirely new. Some POIs have returned from previous seasons. Even Tilted Towers is back, an incredibly popular part of the map from Chapter 1, but is currently covered in snow. Players have also discovered Mancake's Butter Barn is back in the game too, and everyone is pretty pleased about it.

Chapter 2 brought with it a number of different characters that will remain in Fortnite forever, because we either bought or unlocked them. Mancake, a cowboy with a stack of pancakes for a head, was one of those characters, and he brought The Butter Barn with him. The diner was in the game for one glorious season, and then it disappeared, presumably taken by the invading aliens.

Three seasons and a whole new chapter later and The Butter Barn has unexpectedly returned. If you're struggling to find it, since it isn't a syrup-filled oasis in the middle of the desert like it was before, it can be found just southwest of Risky Reels. Players have taken to Reddit to celebrate the return of The Butter Barn, as well as share it with those who have been unable to find it or even log in, and shouting out the best part of the POI of all: its song.

The fondest memory Fortnite players have of The Butter Barn is its theme tune. No offense intended, but most of the songs that play while you're in Fortnite's lobby are pretty terrible. Even the good ones will wear on you after hearing them over and over again. That doesn't appear to have happened to The Butter Barn Hoedown. Hopefully it will be attainable for those who didn't pick it up during Chapter 2, Season 5. If not, you can just head down to The Butter Barn for a listen.