Fortnite Players Are Sick Of Chasing The Loot Llama 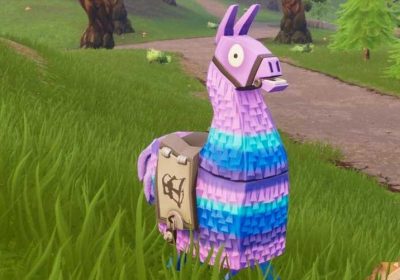 Fortnite will celebrate its fifth anniversary this year and the behemoth battle royale continues to go from strength to strength. It really takes some doing to keep what is a pretty repetitive game as popular and enticing as Fortnite is five years in. Epic does that by constantly evolving the island on which Fortnite takes place, and by continuing what is a pretty elaborate and winding story at this point.

Changes to a live service game are always going to be met with critique, no matter how minor. Nothing will ever go unnoticed either. Back in September, eagle-eyed players noticed that the water level at what used to be the entrance to the Grotto had dropped by a few inches. Turns out that didn't mean it was coming back, but it was still an indication that Epic can't do anything to the island without a slew of people knowing something's different.

A change not quite as minor as the Grotto's water level was the decision to make Fortnite's Loot Llamas move. The alien invasion in Chapter 2, Season 7, breathed life into the previously inanimate llamas and two seasons later, some players have decided they don't like it. The Loot Llamas drop weapons, ammo, and items as you chase and deal damage to them, but that is a lot easier said than done now that the virtual pinatas try to escape.

As highlighted in the Reddit post above, Loot Llamas seem to know you're coming long before you get close. You then need to shoot them if you want the stuff inside, and that's when the chaos really begins. Loot Llamas have a lot of health which means it takes a while to finish them off. By the time you manage to do so, everyone nearby knows exactly where you are and is probably preparing to take you out if they haven't done so already.

On top of all that, players are debating whether what you get out of the llama makes all of that effort worth it. It takes a lot of ammo to finish the llama off, so many people are arguing that they're not worth the time of day. If you can get close enough to build around the llama in order to trap it then it might be worth taking down, but that's a big if. For the most part, it seems players will be leaving them until they stop moving, or until the loot inside is worth all that effort.