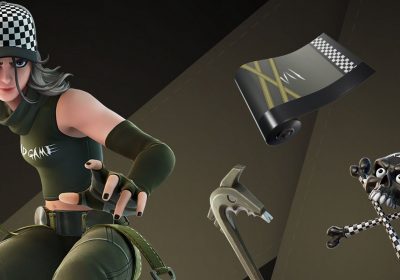 Fortnite’s latest cosmetics pack takes careful aim at critics accusing it of being a “dead game.” In fact, it says so right on the turtleneck.

Teased last week, the "Checkered Past Pack" offers players a new outfit with an olive and checkered motif, a weapon wrap with notches and straps, a harvesting tool that looks sort of like a cane (perhaps commenting on the game's age), a skull and bones which also has the checker-marked pattern, and 600 V-bucks.

But it's the outfit that seems to be Epic's response to players accusing Fortnite of being a "dead game," with the words stitched across the chest of the stylish turtle-necked tanktop.

Most of the responses to Epic’s tease of the Checkered Past Pack last week were about how Fortnite was a dead game, and Epic itself even dared fans to "ratio" each other using the pack’s cosmetics. Although, there was one esports player who responded to today’s announcement with an… interesting idea.

If you're more about Fortnite's penchant for IP tie-ins, the latest leak points to a new Luke Skywalker outfit. Prodigious Fortnite leaker HypeX said that there are some Star Wars-related challenges coming this season as well as Lightsabers from A New Hope and Return of the Jedi, which all point to Luke coming this season. Some fans even think that Luke was previewed in the Season 4 trailer, with the Jedi floating in a bacta tank. If true, Luke would join Finn, Rey, Kylo Ren, the Mandalorian, and several trooper outfits from Star Wars.

Another coming skin is likely to be Iron Man Zero from the Fortnite and Marvel collaboration. What started with a five-comic series and a Spider-Man Zero skin will apparently end with Iron Man wearing what appears to be a bulky Hulkbuster-style suit. Still no confirmation from Epic Games, but the final comic book is just about due for a reveal, so we probably won’t have to wait long.