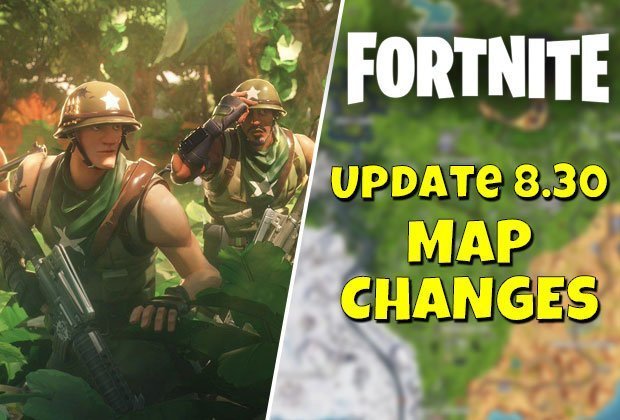 The newest patch notes for Fortnite 8.30 have dropped today, and they contain some interesting bits of information that could help us pinpoint what changes are due to come to the map in the months ahead.

In the ‘What’s New’ section of the patch notes for Creative in the 8.30 notes, Epic notes:

“Reinforce your fort with sleek, new military style buildings. This is the first set of buildings that will premiere in Creative before Battle Royale!”

So this suggests the new incoming military buildings will get their first outing in Creative before coming to Battle Royale a little later… but why?

Well, we’re now far enough into Season 8 that we can expect Epic to start teasing what’s to come next – perhaps a more military theme this time? So over the next few weeks, we’re likely to start seeing mysterious little military building crop up here and there in the Fortnite map.

We’ll keep our eyes peeled for any changes as they appear once the game goes live. Until then, get your thinking caps on – how do you think Epic will weave a more military theme into the game?

The new buildings in Creative mode aren’t the only things that are new in Fortnite this week – there are also a few other interesting changes that have appeared in the game, too.

Here’s what Epic has told us so far:

Reboot Van
Never give up, never surrender! Bring eliminated teammates back into battle with the Reboot Van. Drop in now and become the hero your team needs.

Buccaneer’s Bounty Event
Avast ye mateys… Drop in and arm yourselves during the Buccaneer’s Bounty event! Test your skills in a fresh LTM every single day and collect your very own treasure in the form of in-game rewards by completing free Challenges.

Summary
This mode combines the explosive fun of the High Explosives LTM with the Jetpack. Take to the skies and blast everyone else back to the lobby!