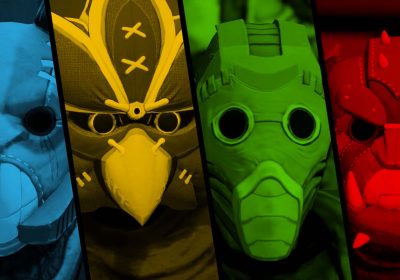 The story-focused (and profanity-laden) trailer made its debut at the Upload VR Showcase. It gives us our first glimpse of in-game footage of the long-in-development shooter, which has echoes of classic co-op titles like the Payday series. Check it out below.

In the game, four players — taking on the roles of  Frank, Udo, Cody, and Kevin — complete heist-style missions, overcoming the odds in firefights and stealing loot. You’ll tear through levels with friends, climbing over obstacles and working together.

The trailer reveals a train yard style level where players fight drones, take out surveillance equipment. It also hints at the game’s wider story, which our band of misfits seemingly in hot water.

XREAL is promising a 20+ hour campaign for the game, with nine levels split across three chapters. You’ll be able to unlock an extensive arsenal of weaponry, unlock skins and masks, play minigames and also take part in PvP events. The game will also get free updates post-launch.

Gambit is in the works at XREAL, the VR developer best known for games like A-Tech Cybernetic and Zero Caliber. Currently the game’s on track for a release on Quest 2 and PC VR later this year. No other headsets have been confirmed at this time.

We’ve got plenty more to talk about at the Upload VR Showcase today. Make sure to tune in. What did you make of the gameplay reveal for Gambit? Let us know in the comments below!