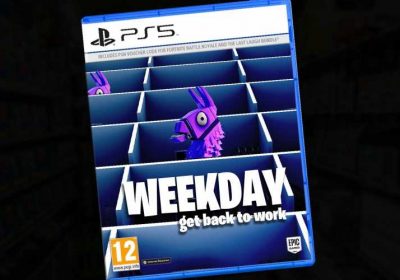 What would you do if you owned a game store and had to recreate cases for trade-in games? Most would probably just go onto an official website and print off a new cover to insert into the jewel case. Not Shemp. As a video game store owner, graphics designer, and content creator, Shemp decided it was better to download the official images and then use his Photoshop skills to improve on the original designs.

Shemp's disregard for titles doesn't end at the Call of Duty franchise, although he did also rename World at War to War at World. Dance Central, the Xbox 360 game that required the Kinect to play, was naturally renamed Dank Central. Def Jam Fight For NY, a Gamecube brawler, was renamed Def Jam Fight for N, with the main character on the cover given a distressingly large number of fingers.

I have too much power in too many categories.

Cars 3: Driven to Win got some help from Dom Toretto's muscle car, while Cars: Race-o-Rama had way too many Steve McQueens.

NBA 2K17, The Legend of Zelda: The Windwaker, and Need for Speed Undercover were similarly and hilariously defaced.

Shemp's original video managed to get over 6 million views on TikTok, so of course Shemp followed it up with a second video showcasing even more hilarious edits. Who could ever forget the timeless sequel to Call of Duty: Blops, Call of Duty: Bloops, which apparently had a Fast and Furious game mode alongside the classic zombies mode. ScribbleDeezNauts tasked players with writing stuff down to solve world hunger, and The World Ends With Yoooooooooooou trails off before finally completing its title.

#TikTokBoxArt Part 3!! You guys are creative, lol! I’d also appreciate it if you could check out my YouTube content! <3

Each of these shops should be in a museum, quite frankly.