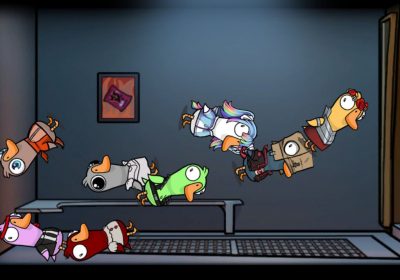 Among Us-like Goose Goose Duck has usurped its inspiration as it overtakes the social murder game in Steam's all-time player records. This marks one of the very few times this has happened where an Among Us clone has beaten the original.

Goose Goose Duck is a game where players alongside their fellow geese must work together to complete your mission on a spacecraft. However, among you is one mallicious mallard, a duck, who has infiltrated the team. Players must use social deduction in order to prevent all the goose from being killed and handing a duck victory. Yes, it does sound familiar.

As Gamesradar reported, SteamDB indicates that Goose Goose Duck recently gained a peak concurrent player count of 489,669 players. This all-time peak was recorded five hours ago, meaning January 4 marks the milestone for the game. This huge number outranks Among Us, which achieved an all-time concurrent player peak of 447,476 two years ago, according to SteamDB.

Goose Goose Duck was in free-to-play Early Access in spring 2021 before launching in the fall. It rode to popularity last year, but it looks like it has reached new heights in early 2023. Earlier this week, the game's official Twitter page acknowledged the explosion in players.

"We expected a large increase in players but not like this," the Tweet read. "We're working on increasing capacity as fast as we can and will keep everyone updated. We aplogise for the inconvenience, we're all working hard so everyone can play."

The Tweet was later updated with a follow-up message that said "Services have come back online" and that the team continues to work on server stability and expansion.

While players are all too aware of Goose Goose Duck's similarity to Among Us, it's become a hit with fans as they appreciate the greater variety of maps, with more than seven on offer, greater amount of game modes, and more sub-roles, such as Dodo Bird, the Pelican, and the Morphling. There's also tons of cosmetics on offer as well as built-in proximity chat. While Among Us may still be a hit once you count the other platforms it's on, clearly Goose Goose Duck has done something right to overtake its inspiration on Steam all-time player counts.