Home » News » Grand Theft Auto: Vice City: How To Unlock Each Outfit And Where To Find Them

Grand Theft Auto: Vice City: How To Unlock Each Outfit And Where To Find Them 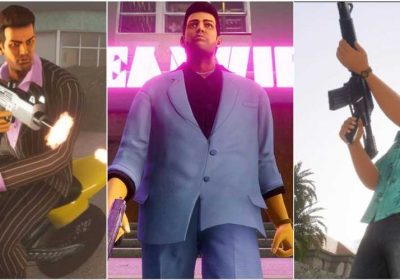 GTA: Vice City introduced a lot of new mechanics to the series, such as investing in businesses, which are still being used in the series today. Vice City also introduced many firsts for the franchise, including the ability to change main character Tommy Vercetti's clothes.

Unlike future games in the series, which let you go into a clothing store to buy each individual piece of clothing. Outfits in Vice City are scattered across the map upon unlocking them. You're told where to find the outfits in Vice City but their locations are not marked on the map. Here is exactly where you can find each outfit in Vice City and how you can unlock them. 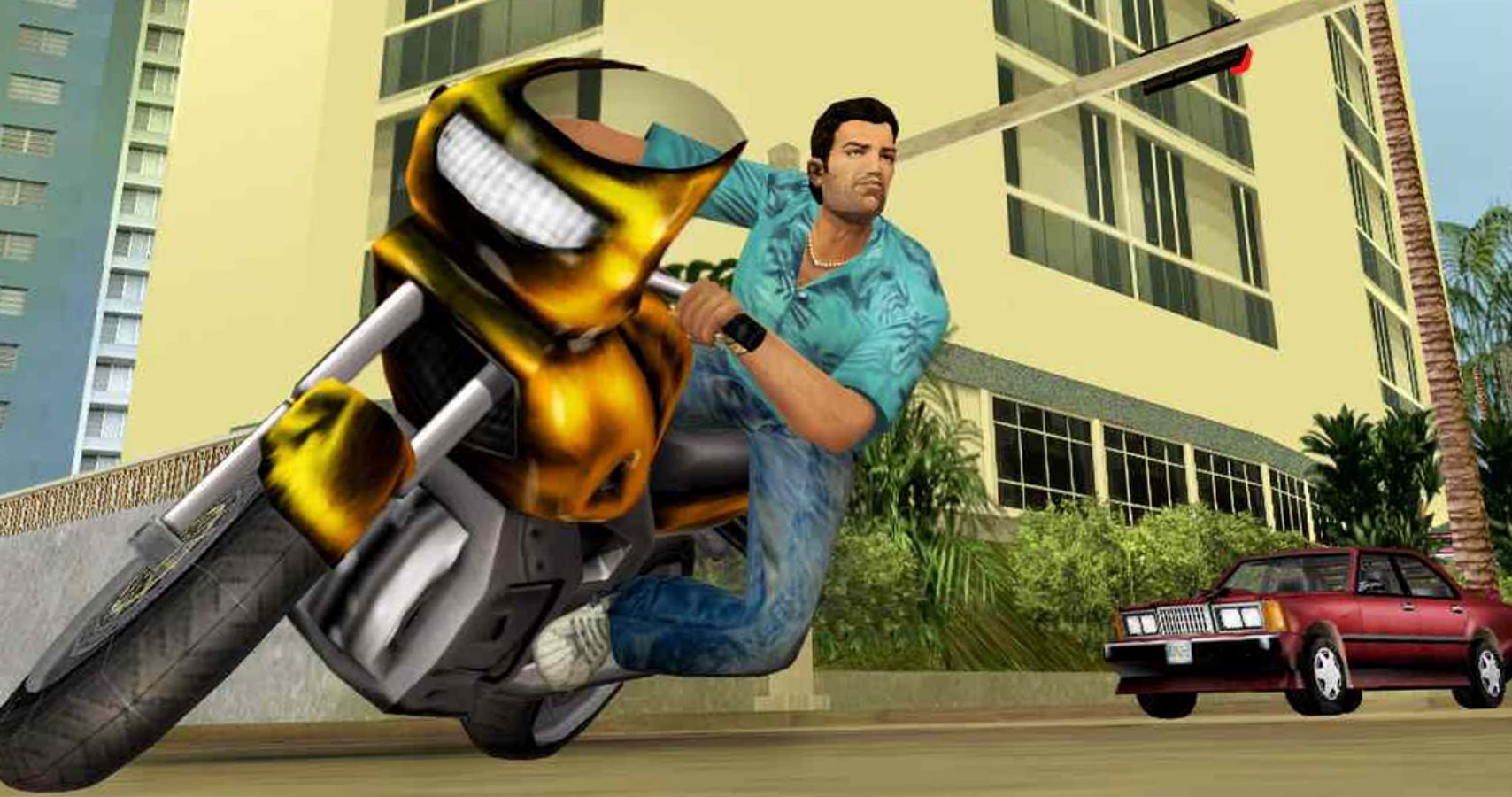 The default outfit for Tommy Vercetti is an iconic outfit within the series. A teal Hawaiian shirt with jeans and sneakers make for a classic look that helps to capture Vice City's '80s Miami-inspired setting.

You can wear this outfit once you complete "The Party" mission in the game and can be found in three different locations. Those locations are Tommy's room in the Ocean View Hotel on the southeastern part of the map, Tommy's office at Vercetti Estate on Starfish Island once the "Rub Out" mission is completed and at the Hyman Condo in Downtown Vice City once the property there is purchased. 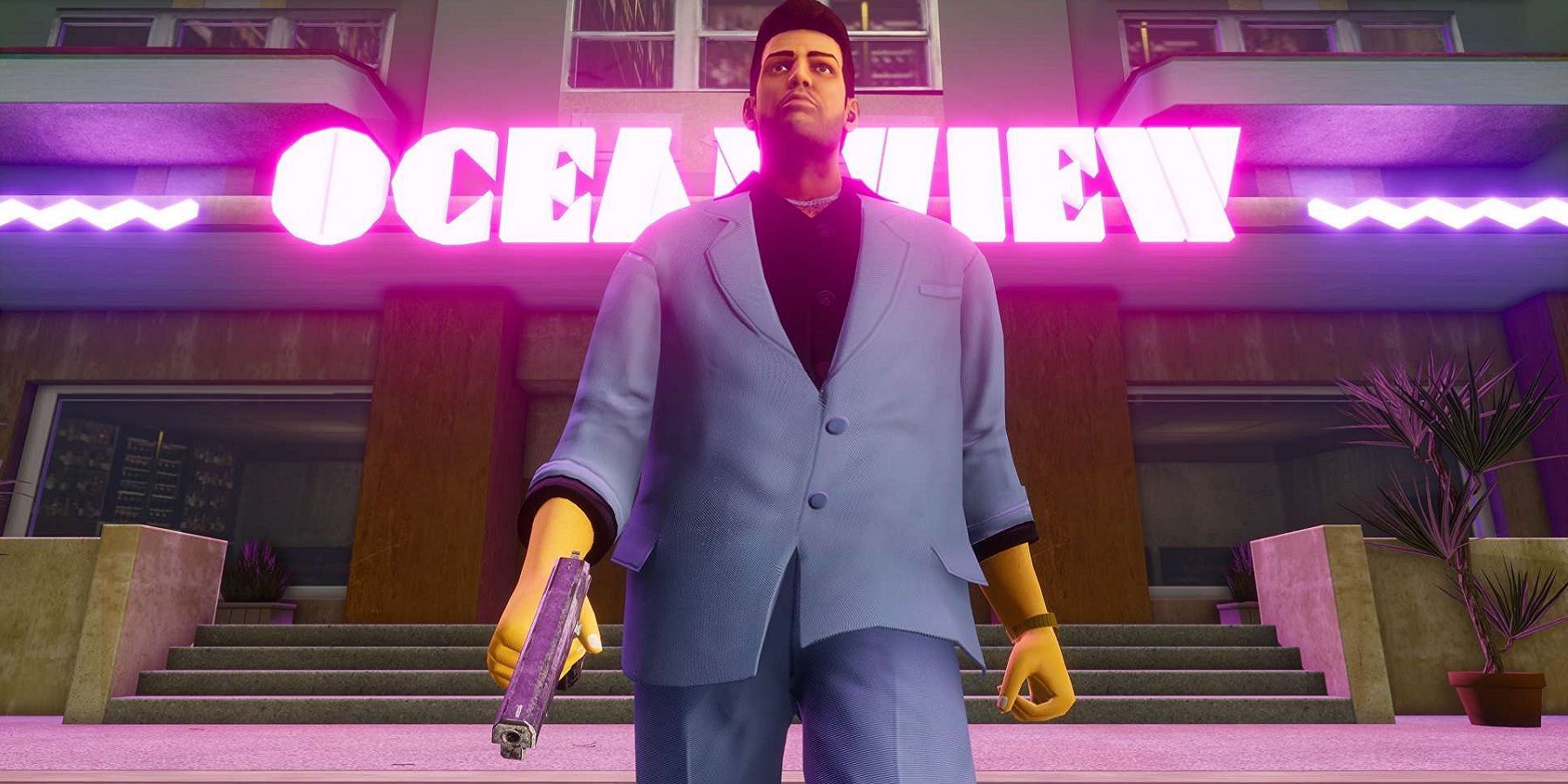 A blue suit that will have people instantly thinking of Miami Vice. It is a classy outfit that shows Vice City that Tommy Vercetti has arrived and is here to stay.

The Soiree outfit in Vice City is first worn during "The Party" mission where you have to pick it up at Rafael's clothing store in Ocean Beach. Once the mission is completed, the outfit can be equipped at the same place. Look for a white and green building with Rafael's written in a pink neon sign in Ocean Beach. 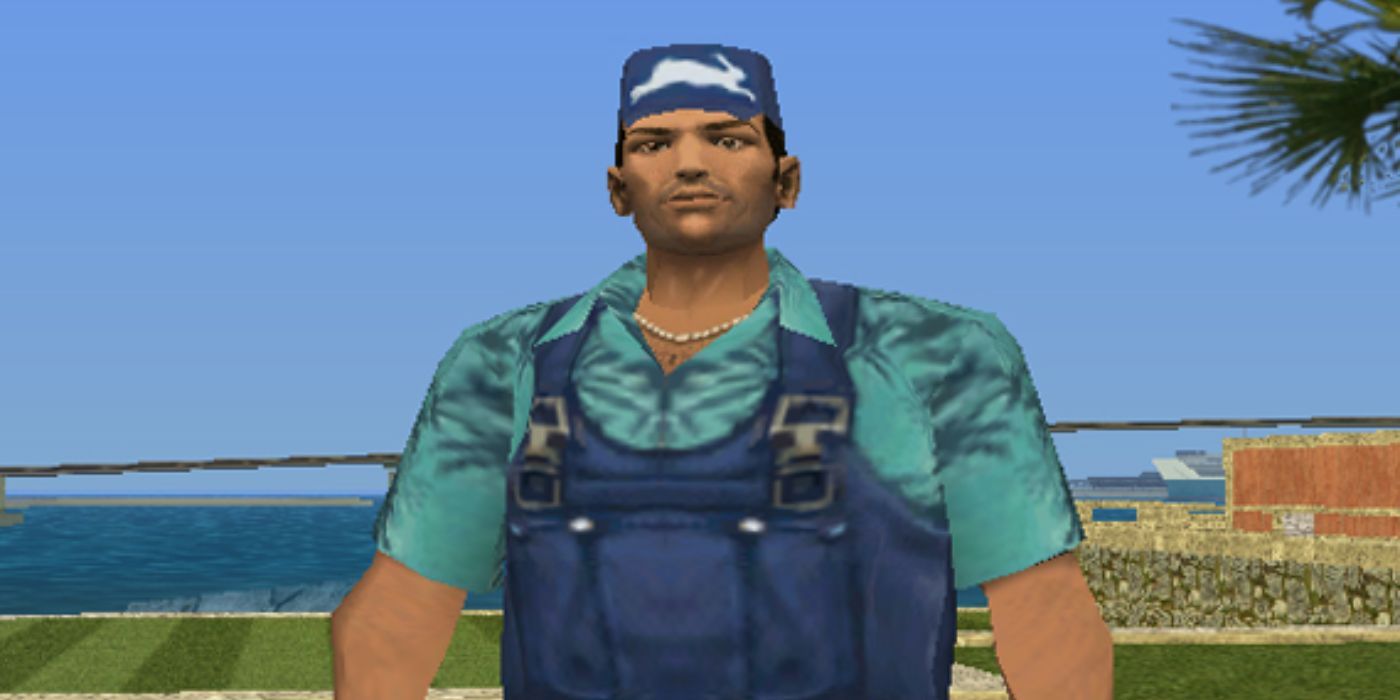 An outfit that gives us a glimpse as to what Tommy would be like if he lived a different life. It features blue coveralls over his street outfit with a cap and gloves to go along with it. He first wears this outfit during the Riot mission where he poses as a worker and has to start a riot to help Avery Carrington with his real estate sales.

Once you complete the mission, the outfit itself can be found at the Tooled Up store in the North Vice Point Mall in Vice Point on the northern part of the first island. The store can be found on the first floor of the mall. 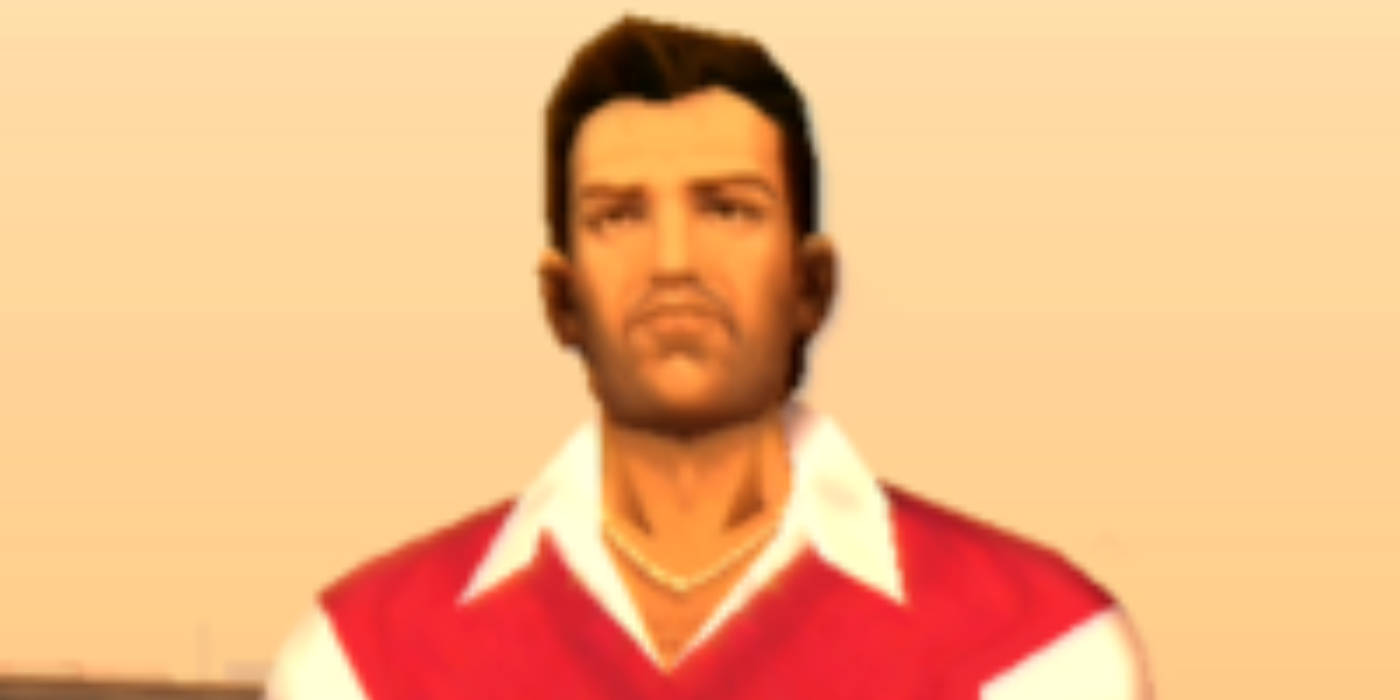 Golfing is not an activity in Vice City as it is in later games, but there is a golf course in the game that plays a part in the "Four Iron" mission, which is where this is first worn. A red and purple vest worn with red plaid pants, one glove, and brown shoes makes Tommy look ready for golf.

Once "Four Iron" is finished the outfit can be found at the entrance of the Leaf Links Golf Club, which can be found on the second island in the center of the map. 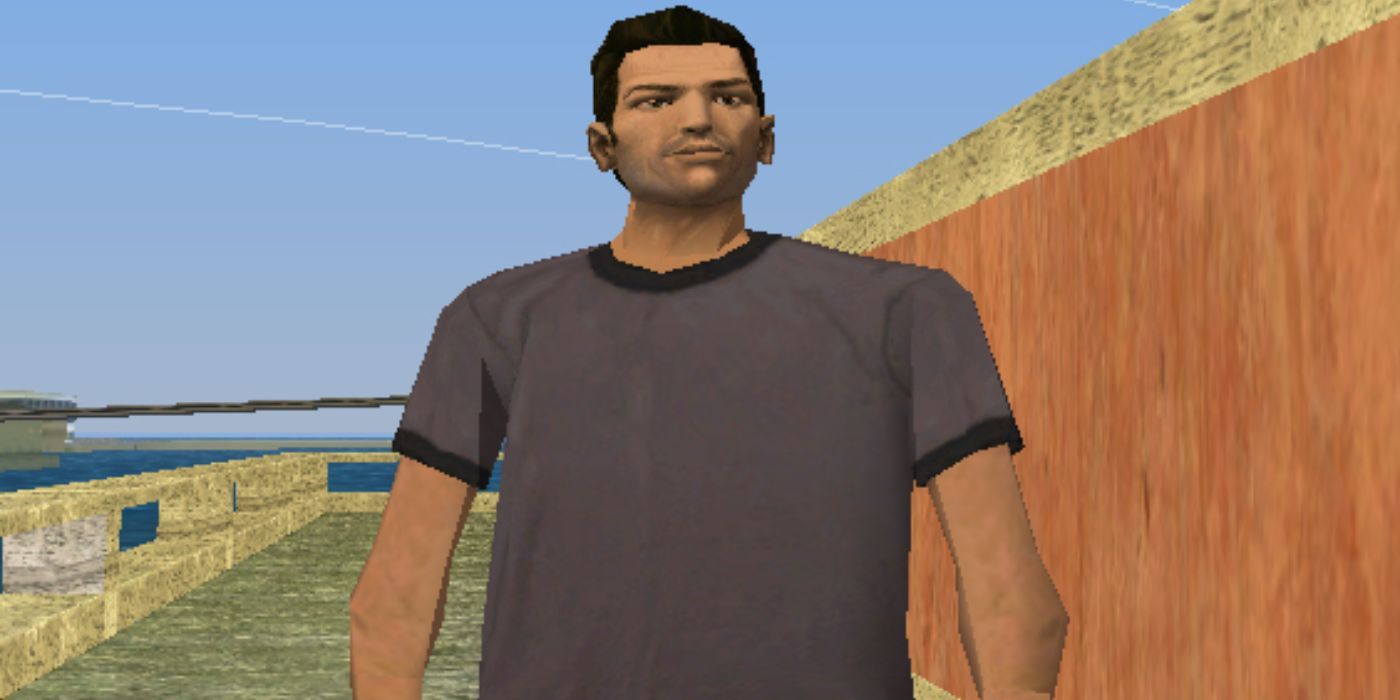 Sometimes it's best to just kick back and relax, which is the whole point of the casual outfit Aesthetically there's not much difference between this outfit and the street outfit except the top is now a plain brown shirt.

The casual outfit in Vice City can be found in the GASH Store on the second floor of the North Vice Point Mall after you complete the "Treacherous Swine" mission for Colonel Cortez. 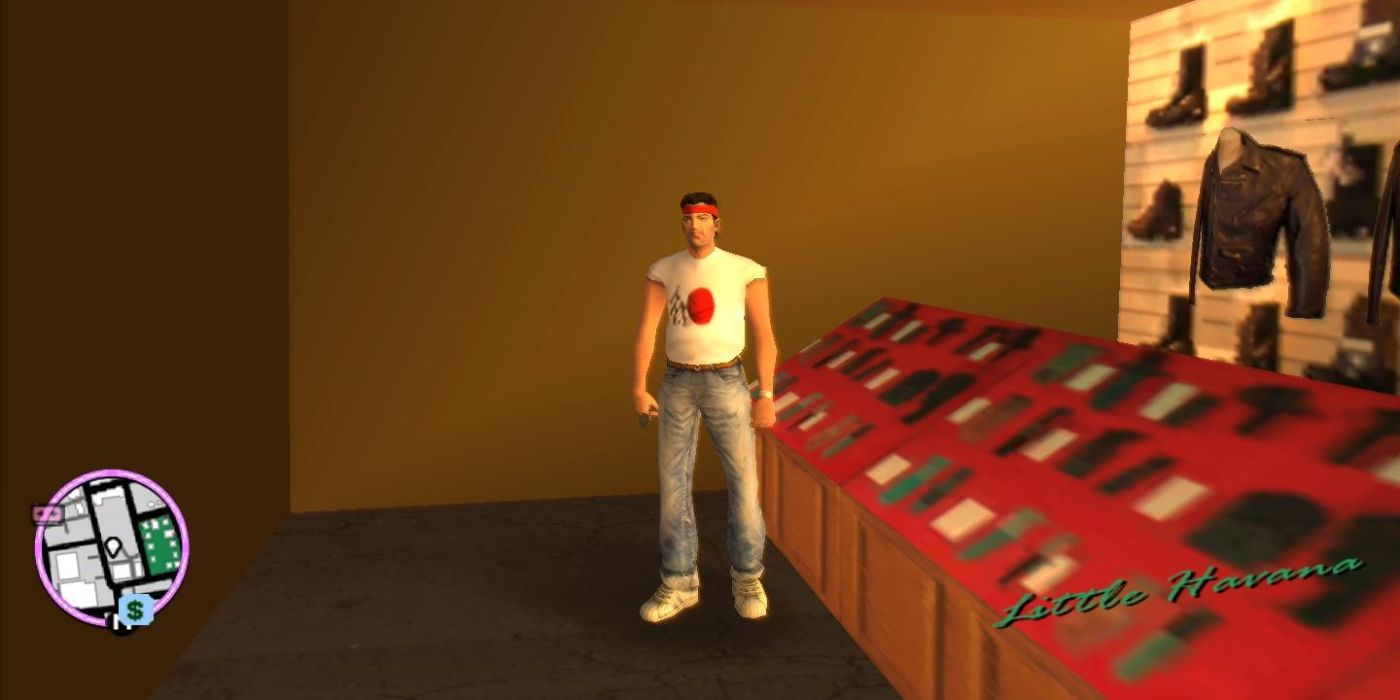 Vice City has Cuban gangsters in it that wear outfits identical to this one worn by Vercetti. This outfit is worn as a disguise by Tommy who starts a gang war between the Cubans and Haitians in Vice City for Avery in order to lower real estate prices in the city. He does this by crashing the funeral of a Haitian gang lord with a drive-by in a car.

After the mission is completed, you can get the outfit anytime from Little Havana Streetwear & Tattoo Parlor in the northern part of Little Havana, south of the Print Works shop. 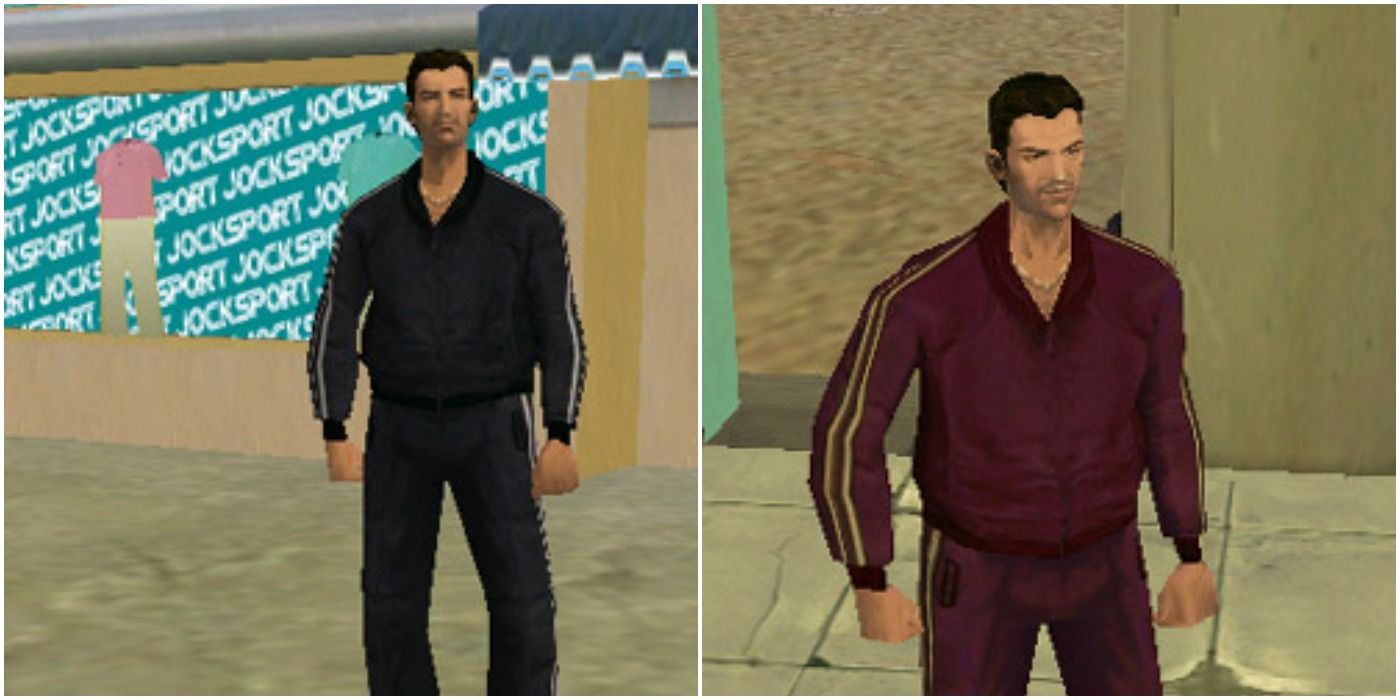 Unlike other outfits in the game, the tracksuit has two different variations. One version of the tracksuit is black with white stripes while the other is a maroon red with yellow stripes. Both of which make you feel like going for a casual jog on the beach and are unlocked after completing the "Supply & Demand" mission.

Each variation of the tracksuit has its own location. The black and white version is located at the Jocksport store in Downtown Vice City, on the westernmost road in the district. As for the red and yellow version, that can be found in Brownstone Laundromat in Little Havana north of Robina's Cafe. 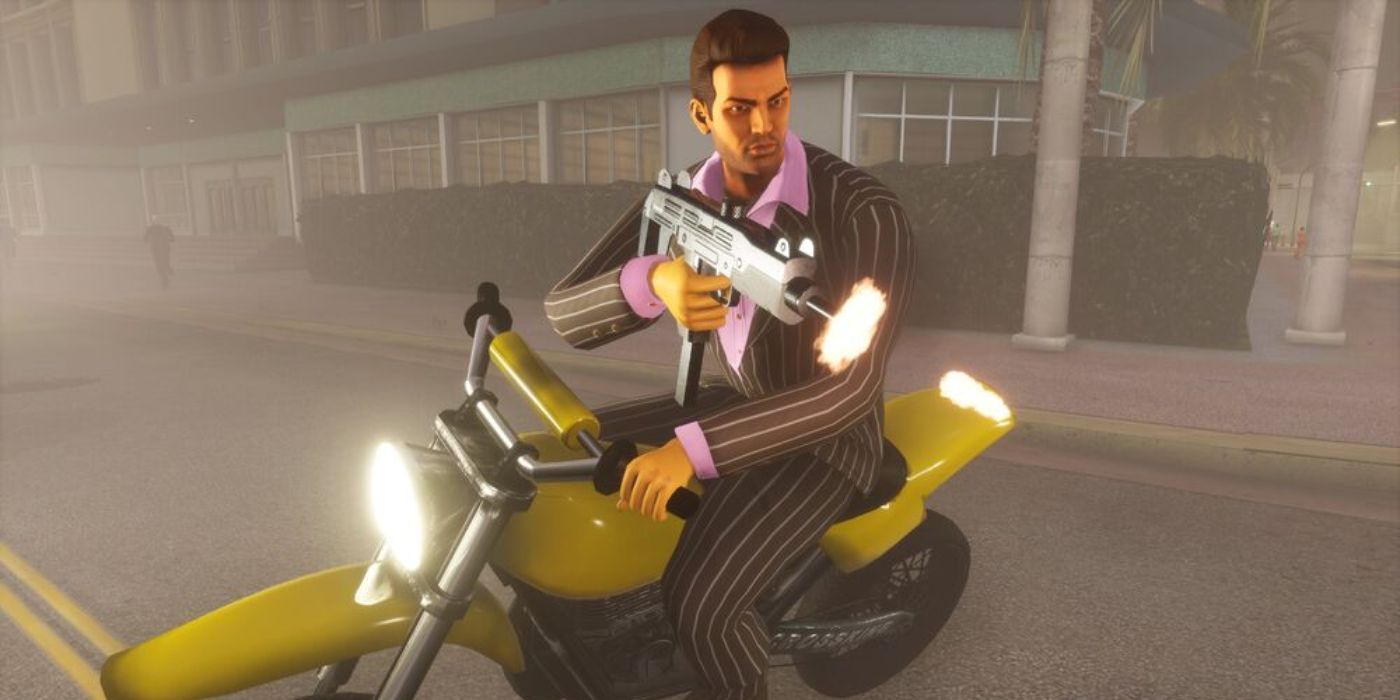 Probably the nicest suit in the game, this outfit is great for roleplaying Tommy as Vice City's kingpin. The pinstripe black suit with a pink dress shirt will make you own the room and look good doing it.

To unlock this suit, you must first purchase the Pole Position Club in Ocean Beach, which costs $30,000. In order to do that though, you have to first complete the "Shakedown" mission for Vercetti Estate. Once that is done, the outfit can be equipped at Collar and Cuffs, which is located down the street from the Pole Position Club. 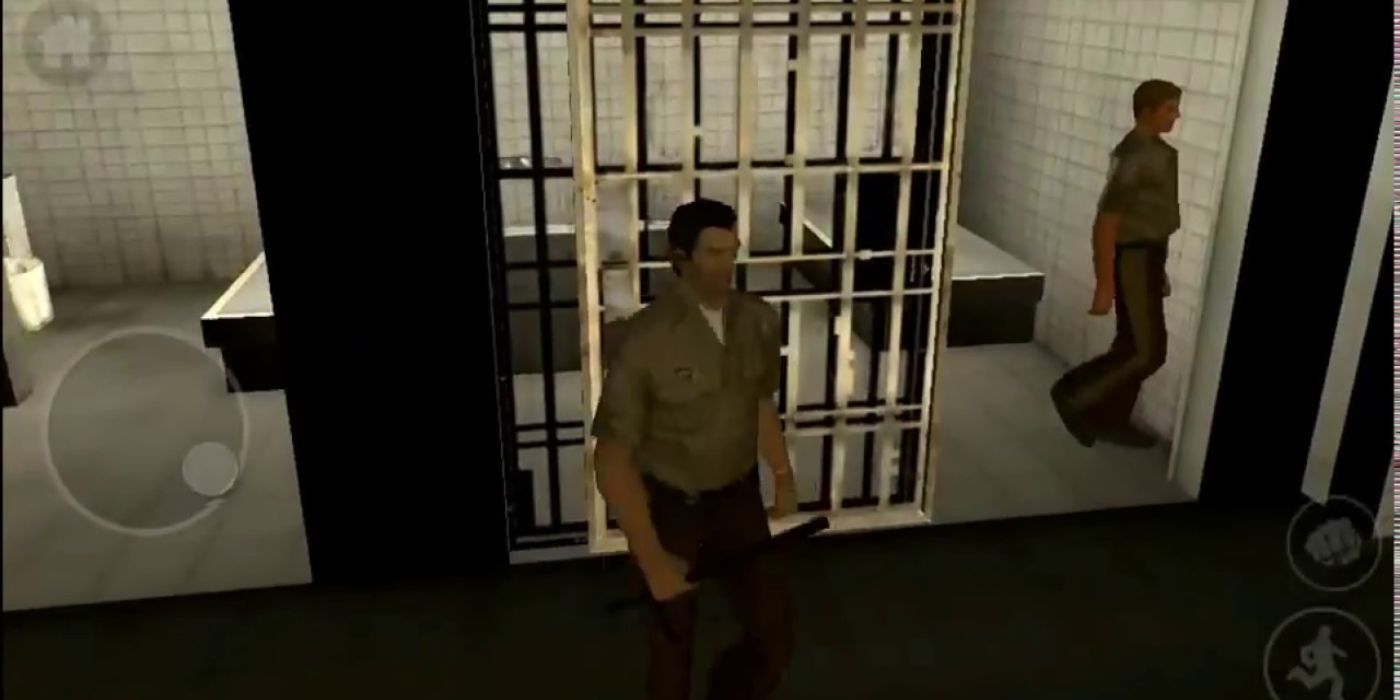 Tommy becomes one of Vice City's finest with this get-up that perfectly captures a Florida police officer's uniform. This outfit also has a practical use as it enables Tommy to explore both the Washington Beach Police Station and Fort Baxter Military base without being attacked.

This outfit is first introduced in the "Cop Land" mission where Tommy and Lance have to disguise themselves as cops to blow up a cafe in the mall. The cop outfit in Vice City can be worn anytime once the mission is completed and is located at the Washington Beach Police Station, just south of the Malibu Club. 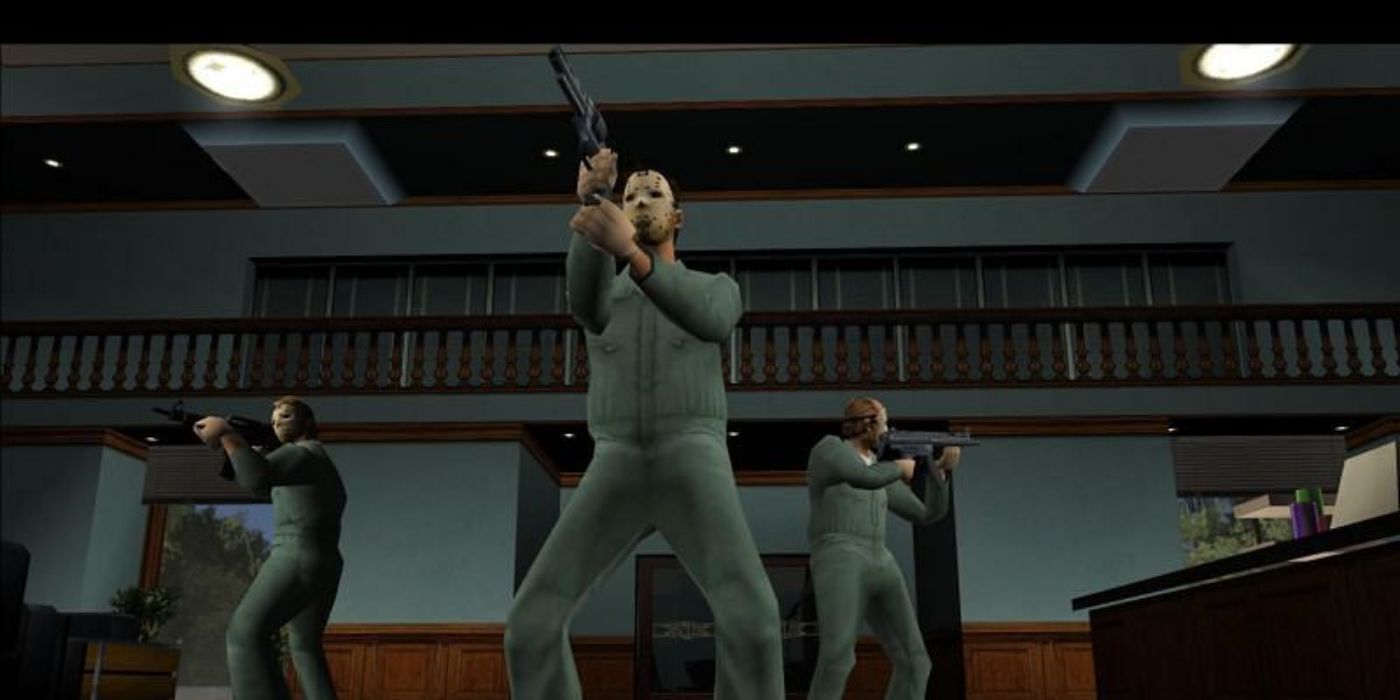 Though the hockey mask of this outfit will bring Jason Vorhees to mind, the outfit is worn not to kill a bunch of teenagers but rather to hide Tommy's face while he robs a bank during "The Job" mission. Something that is a bit of a GTA tradition.

Once "The Job" is completed, the outfit can be found at the entrance of the Malibu Club located at the center of the first island. Before you can even do the mission though, you have to first purchase the club for a hefty $120,000. 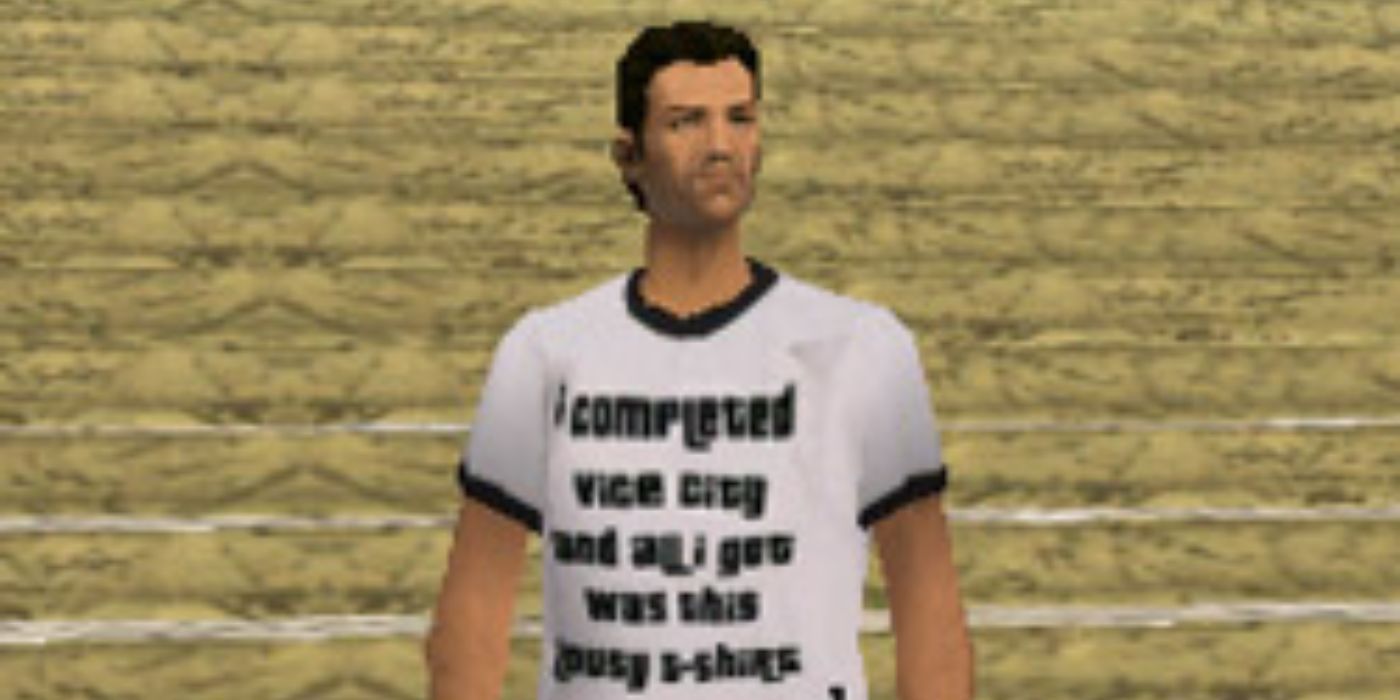 Probably one of the funniest jokes in gaming, this outfit is just Tommy in a white t-shirt that reads, "I completed Vice City and all I got was this lousy t-shirt." In an era before achievements, this was a nice reward for reaching 100 percent completion in Vice City.

As previously stated, you have to complete Vice City to 100 percent completion in order to find this outfit at Vercetti Estate. Like the street outfit, it to can be found in Tommy's office inside the mansion.