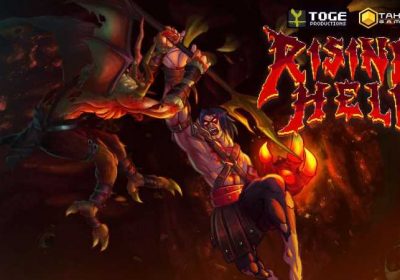 You’ll be in a frantic rush to escape hell in Tahoe Games’ upcoming roguelite Rising Hell. Packed with all manner of bloodthirsty enemies and ear-melting guitar riffs, this is a game where your only goal is to break out of this randomly generated Hell tower.

Instead of tearing up the undead with bullets, Rising Hell offers combos akin to Devil May Cry as you conquer each platform with raw adrenaline. Gameplay is supposedly as unforgiving as a Soulslike, where your low health pool makes every single encounter you have with an enemy a legitimate threat.

The roguelite’s lore is as devilish as you’d expect. You play as a damned soul who is tasked with climbing the tower by Mephisto the Trickster, who is definitely deserving of that title. As you play through the game, you’ll realize that Lucifer is also being held in the tower alongside his four Archdemon bodyguards. As you climb higher, the ruler of Hell is also attempting to escape, adding to your challenging endeavor the closer you get to your goal. Still, your only objective is to ascend and break free from the tower’s grasp as fast as possible – you can probably tell who the final boss will be.

The tower of Hell – which holds a Sauron-esque boss at one stage – offers various routes to take during your ascension, and three perks will be offered to you at the end of each section that can be purchased with red orbs. Furthermore, gameplay balances your growing confidence with intense combat the further you get, and additional characters and abilities will be unlocked as you progress. Rising Hell version 1.0 is due to launch on May 19 for PC via Steam. Console users can expect it to debut on May 18 for PS4, May 20 for Nintendo Switch, and May 21 for Xbox One.