Home » News » Halo Infinite limited edition Xbox is already on eBay for over £1,000

Halo Infinite limited edition Xbox is already on eBay for over £1,000 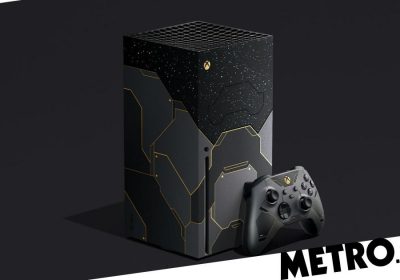 It’s not even available in the UK yet, but there are already eBay listings for the limited edition Halo Infinite Xbox Series X console.

As part of Halo Infinite’s presence at Gamescom this year, Microsoft revealed not just its release date (which had been leaked beforehand), but some tie-in merchandise to celebrate the game and the series’ 20th anniversary.

One of them was a limited edition Xbox Series X console which, while slightly more expensive than a regular one (it costs £479.99), sports a spiffy and unique design and comes with a matching controller.

It isn’t available to purchase in the UK yet, but surprisingly (or unsurprisingly), listings for it have already popped up on eBay following pre-orders going live in the US.

As a reminder, the console hasn’t released yet so these people are attempting to sell you a pre-order, not a physical product. At the time of writing, the most expensive one is priced at $2,000 AUD, which is roughly £1,058, more than double what it actually costs. And that doesn’t include the postage either.

Even the cheapest one we spotted is going for £620, but that listing has it up for auction so the price could go up if people keep bidding on it. Basically, it’s the same scenario as when the Xbox Series X and the PlayStation 5 came out last November.

Official pre-orders are unfortunately sold out as well at the moment in the US. Microsoft, Walmart, and Target, specifically, are completely out, while Best Buy’s listing doesn’t appear to have gone live yet.

With the bundle releasing on November 15, hopefully Microsoft will have more pre-orders available by then and ensure everyone is aware of when that will happen, so fans aren’t incessantly refreshing web pages for hours.

The bundle also comes with a digital download code for Halo Infinite, although that doesn’t mean you can play the game early. The code won’t be distributed until December 8.

Halo Infinite releases on December 8 for Xbox One, Xbox Series X/S, and PC.