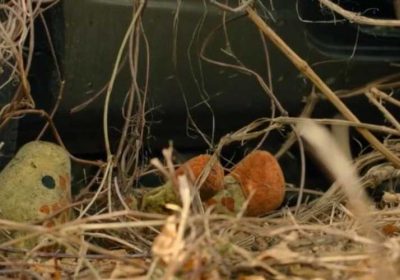 Episode two of HBO's adaptation of The Last of Us features an easter egg that's ripped straight from the games – a giraffe plush that appears in both the first and second game.

The second episode of The Last of Us premiered earlier this week and while most people are probably still disgusted by that end scene, others have been combing through to look for easter eggs and references to the games. Much like the first episode, there are a few to be found here, but one of the deepest references comes from a "blink and you'll miss it" moment.

As reported by GamesRadar+, one scene in the episode has Joel, Ellie, and Tess making their way towards the Capitol building. During that scene, the camera pans down to reveal a dirty giraffe plush next to a car and covered in vines, clearly having seen better days. Although most will instantly think of the game's iconic giraffe scene, it's actually a reference to the same plush that can be found all over in The Last of Us.

The giraffe plush can first be seen in Sarah's room during the prologue, before popping up in various places throughout the game, including in the arms of a young girl outside of the quarantine zone while chasing Robert, in the toy shop with Henry and Sam, and in the bedroom where Joel and Ellie have their big argument. Interestingly, the plush actually changes location in The Last of Us Part 1, having been removed from the girl's bedroom in the scene where Joel and Ellie argue.

Although the plush isn't seen quite as much in The Last of Us Part 2, it does pop up in a toy shop while Ellie is out on patrol, where Ellie can spot it and make a note of it in her journal. Guess they're not quite as popular in Seattle as they are in Boston.

In The Last of Us, giraffes represent the value of life and give Ellie something to fight for after her traumatic encounter with David, which is likely what the plushes are supposed to be referencing as well. The parallel between Sarah having the plush in her room at the start of the game and Ellie's fascination with them at the end is a pretty obvious parallel as well.

The version of the giraffe plush that's included in the show is an exact replica of the one in-game, down to the little tiny eyes and way it's sat. I was initially very impressed with this attention to detail, before finding out that PlayStation Direct has sold these plushes for quite some time, and it's likely just that one. Still, it's a nice nod to one of the smaller easter eggs in The Last of Us, which is perhaps no surprise considering Neil Druckmann direct the show's second episode.