The wood is weather-worn, rough edges smoothed by untold hundreds of years spent floating through space, but still a few symbols remain, meticulously carved into the surface. It’s a few words, I think, and the wood was part of a prow—the only remaining bit of a long-lost shipwreck.

But I can’t quite make out what it says. I recognize a few symbols, one for action and one I associate with movement, and the grouping of glyphs that represents “Me.” I’m going to have to make some guesses though. Looking over my options, I cobble together a brief sentence.

“Follow me if you can? That’ll have to do for now.” I slip the wooden fragment into my pack. Luckily we can trace the origin, an unmarked moon that will hopefully be full of more artifacts with more symbols to translate. It better, because these feeble guesses at meaning are the only clues we have to stave off the end of the universe.

Heaven’s Vault will be divisive, I imagine. I loved it. Absolutely loved it. But I also couldn’t blame anyone for bouncing off it.

Let’s just get the bad out of the way, shall we? Inkle is not great at action. Might as well be blunt so the people who want this to be something different can go “Ah, not for me then.” Heaven’s Vault looks more like a traditional big-budget video game than its predecessors, the text-driven Sorcery! and 80 Days. You have direct control over a character this time, or occasionally her spaceship. There are people to talk to and myriad planets to explore. 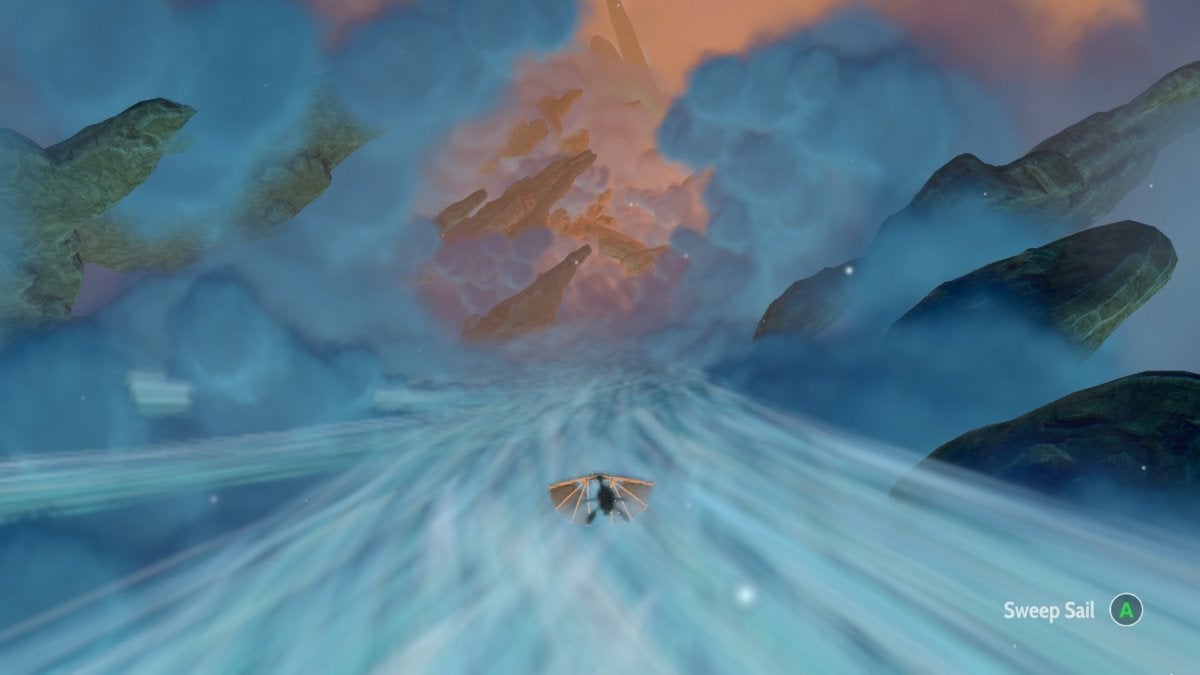 But it’s clumsy. The spaceship sections are particularly tedious, and you’ll spend a lot of time on the spaceship. Space travel is known as “sailing” in the universe of Heaven’s Vault, and it’s an apt name given the slow pace. Planets are connected by a network of “rivers,” and you’re at the mercy of the currents. Even a short journey can take upwards of five minutes, mindlessly following these paths, sometimes bearing left and sometimes right but always at the same “Just slow enough to be sort-of annoying” pace. The first few times it feels novel, but by the end of the game (and on subsequent playthroughs) it’s a chore.

Exploring the actual planets is a bit better, but even so there are some pacing annoyances. Talking to the characters you meet can entail as much walking-to-where-they-live as actual conversation, which sometimes felt like such a bother that I never returned to talk to certain characters. Worse are the paths that lead nowhere important at all, as you reach the end of a hike expecting some secret artifact only to realize there’s nothing to do but turn and trudge back.

So yeah, I’d understand why someone might preemptively give up on Heaven’s Vault. It’s an uneven experience, and slow to display its charms. Worse, it’s often rough around the edges. 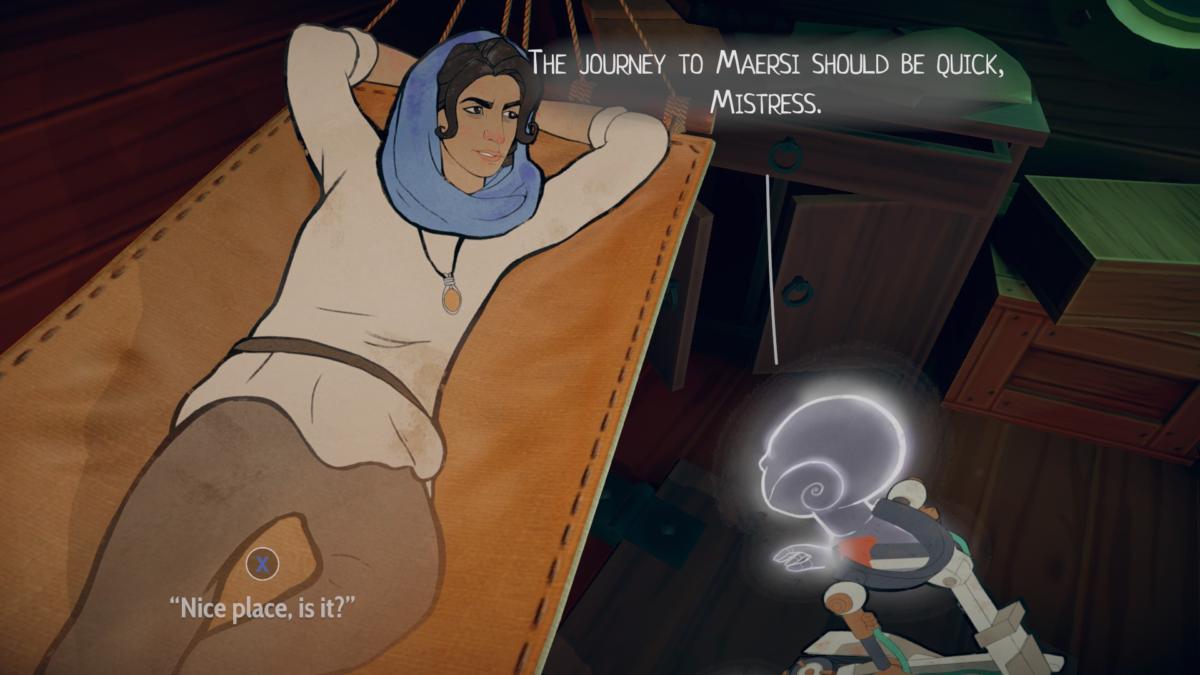 Settle in though. Be patient, deal with the splinters, and you’ll be rewarded with an incredibly unique journey, one where the hero is…linguistics.

Heaven’s Vault starts on Iox, once the political center of a vast empire, now reduced to an archive and research institute. It’s a symptom of much worse, happening away from the relative wealth of Iox. The Nebula as a whole is dying. Technology peaked centuries ago, and people freely admit that the past produced marvelous machines that nobody in the present understands—robots, spaceships, teleporters, and so on.

And nobody wants to understand them. Nobody really cares all that much about history. Nobody except for you, that is. You play as Aliya Elasra, one of the few people in the Nebula to still brave interplanetary travel. You’re also a bit of an outsider in other ways, prone to looking at the crumbling remnants of lost civilizations and asking “Why?” Why did these once-powerful empires disappear, along with their language—both written and spoken? Why were so many of their buildings abandoned? Why were the remaining robots buried beneath Iox, hidden for hundreds of years? 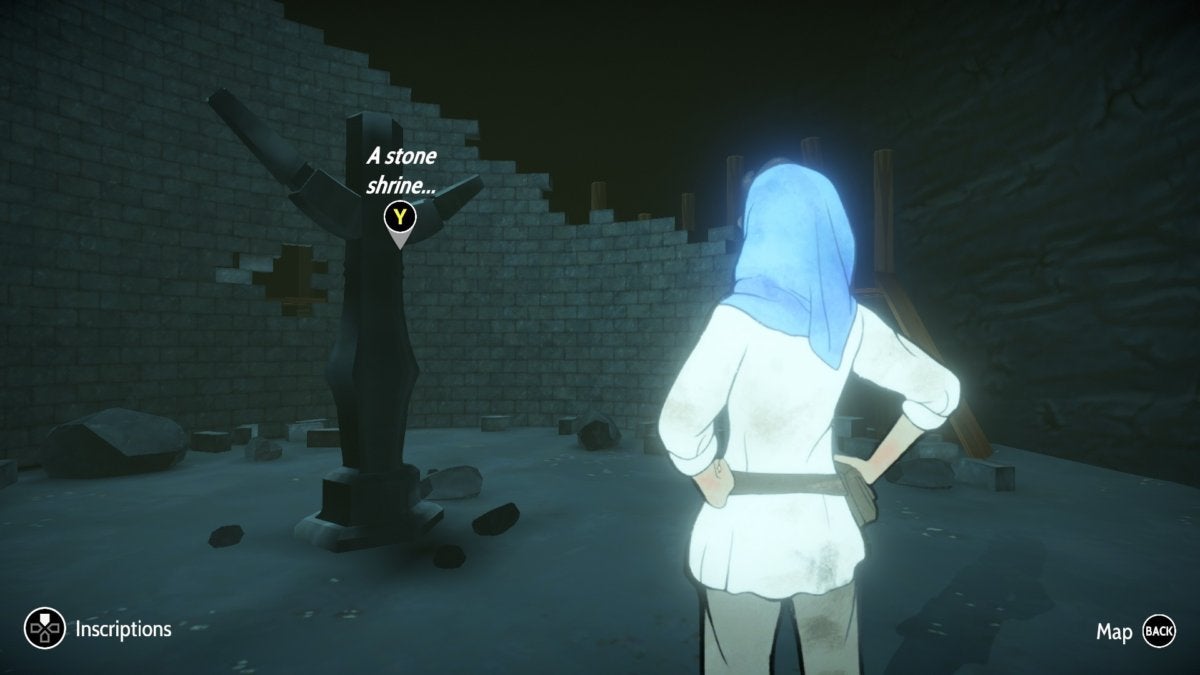 You’re an archaeologist, of sorts—not the Tomb Raider or Uncharted type, but an actual student of history. And with no one to ask for answers, you spend most of Heaven’s Vault trawling old ruins for clues.

This is where Heaven’s Vault shines, setting foot on long-abandoned moons and discovering what the ancients left behind, and then piecing together what it means in aggregate. For instance, a lush garden full of stone markers presents myriad possibilities. Maybe it’s a temple of some kind. Maybe it’s a graveyard. Maybe it’s just a garden.

You’ll choose eventually—or rather, choices you make will inform whether Aliya considers it a temple, a graveyard, or a garden. Like Inkle’s other games, Heaven’s Vault is built around thousands of tiny inflection points. Some are obvious, taking the form of dialogue trees with distinct suppositions for Aliya to follow. A large number of them are more subtle though, the result of Heaven’s Vault’s translation system. 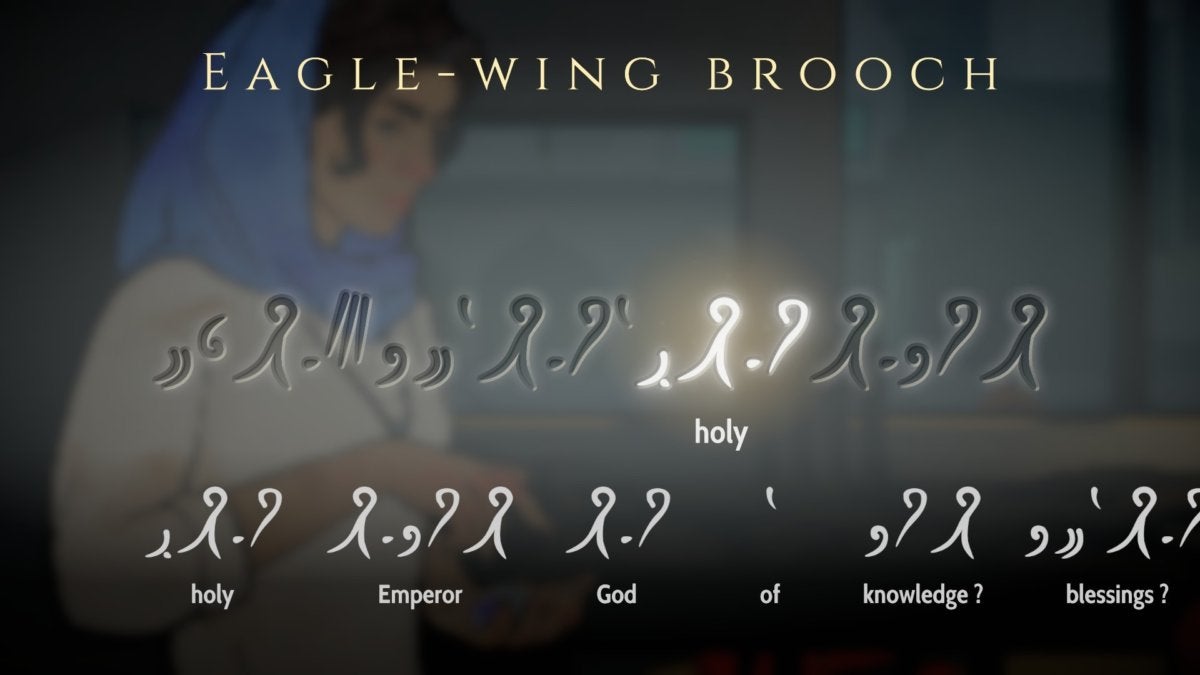 The old empires may have disappeared, but their words haven’t. Problem is, nobody can actually read Ancient. It falls to Aliya to translate what she can, usually by inferring from context. Take the two-word inscription on the statue overlooking a farming moon, for example. It’s pretty safe to assume that translates to “Water Goddess.” Then you can start plugging those words into future translation attempts, either directly (i.e. “Goddess protect us”) or by noticing a relation between similar words (“Goddess” and “Holy”).

You’re essentially learning a language—for real. It took me 12 or 13 hours to make it through Heaven’s Vault the first time, and by the end I not only recognized certain words on sight, I even understood why those words were represented by the symbols in question. It’s difficult but exhilarating.

Your translations, your guesses, then feed back into Inkle’s branching paths. Say you translate part of the inscription above a doorway as “Temple,” Aliya will then refer to the building as a temple going forward and try to relate any further evidence back to that hypothesis. If however you translate it as “Graveyard,” then that’s what she’ll refer back to with future discoveries. 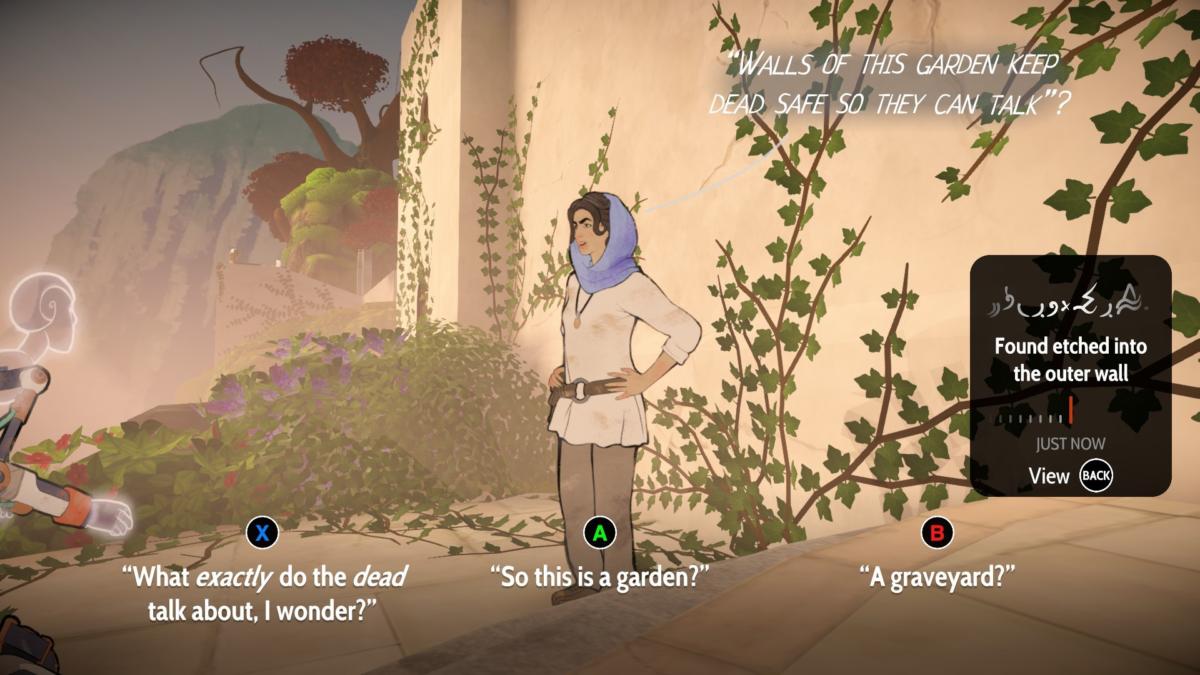 It’s an overwhelming amount of variation, none of which is very apparent to the first-time player. You’ll make your guesses and move on, sometimes doubting you made the right decision but never stuck, never backed into a corner. Start a new game from scratch though and it’s incredible how the game adapts to your choices.

This is most obvious on a smaller scale, with Aliya herself. Conversations in Heaven’s Vault are remarkably fluid, a single answer potentially leading to an entire branch of dialogue options you’ve never seen before. And because conversations take a few minutes at most, it’s easy to appreciate the changes. For instance, the first real discussion in the game might end with your adoptive mother, Professor Myari, wishing you well on your journey—or with Myari throwing you out of her office, exasperated.

But while it’s easier to witness the short-term changes, Heaven’s Vault is at its most impressive when you pull the camera back and look at the longer arcs. Interact with people enough times and you’ll form a relationship. Friendly? Hostile? Cynical? Sarcastic? Loving? Most of the major characters in Heaven’s Vault can go in a number of directions, or land somewhere in the middle. Or you can choose to ignore characters entirely. That’s a choice as well. 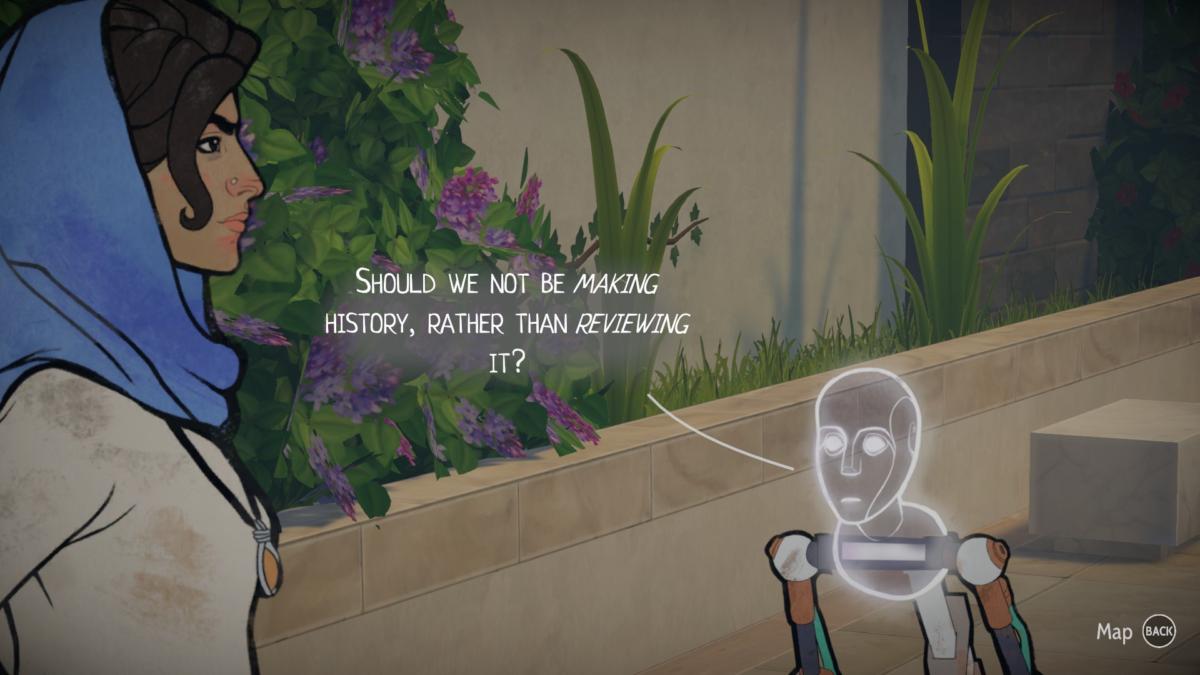 Because it’s so freeform, much of Heaven’s Vault is inessential by design. The story needs to route around your choices at any moment, meaning all these interesting relationships you develop, all these potential story threads, could end up going nowhere. In fact, the point-of-no-return is so poorly telegraphed I unintentionally cut myself off from resolving a few storylines I was invested in, and it didn’t matter much at all in the grand scheme.

It mattered to me though, and I guess that’s more important. The Nebula, much as I grew tired of lackadaisically sailing around it, is essentially just a manifestation of Inkle’s philosophy. It’d be cleaner and simpler for players to choose a destination from a list, or just have a few major paths between each locale. Inkle opts for a tangled web of rivers and tributaries though, a mess of hundreds of branches, some of which result in minor diversions, others which take the player off in a new direction entirely. Change a single dialogue choice or translation and Aliya may end up with a totally different—and still totally valid—interpretation of the story.

That’s the magic of Heaven’s Vault. That’s the key.

There’s a book I loved growing up, Motel of the Mysteries, a satire where researchers far in some hypothetical future tried to guess at uses for present-day objects. In the book a prestigious museum displayed a necklace, crafted from pristine porcelain, with the word “Sanitized” scrawled across it. The joke is obvious to the reader though. The necklace? It’s a toilet seat. 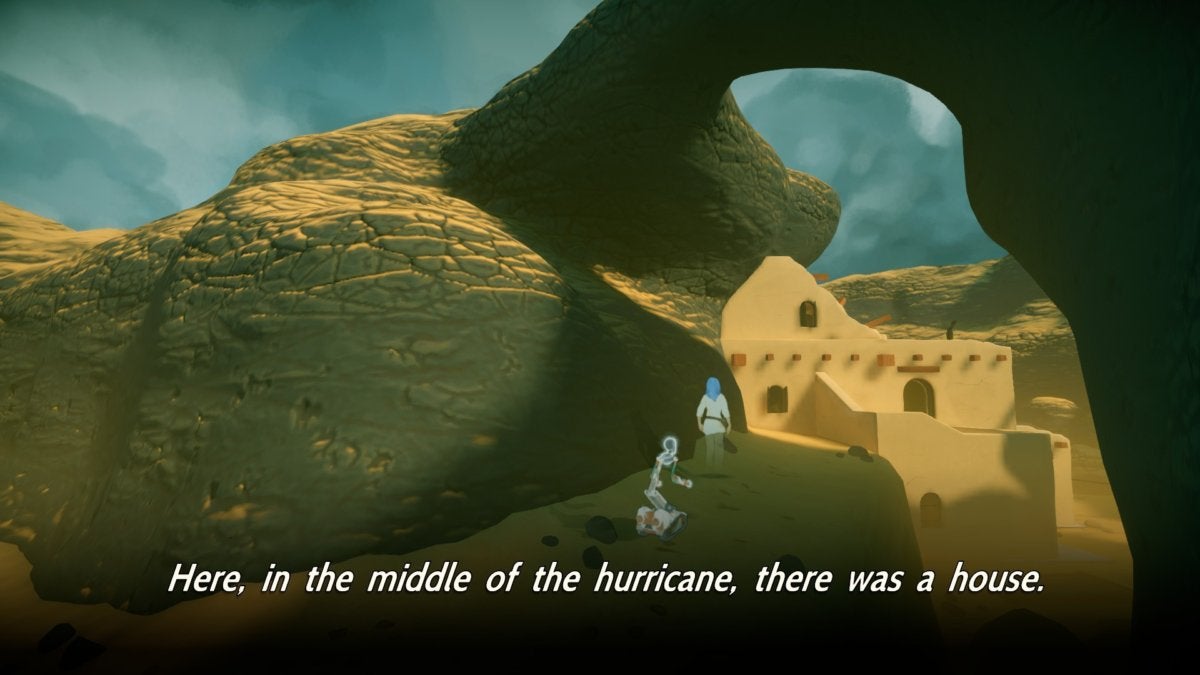 We can only ever really guess at history. Heaven’s Vault isn’t just a game about archaeology insofar as you’re translating a lost language. It comes to a deeper understanding, the idea that history is biased in the telling. It’s informed by context, by cultural norms, by preexisting knowledge. There is no “objective” past, at least not one that humans can put to paper, and the more you know the messier it all becomes.

Additional context is still useful though, recasting your earlier ideas in a new light. And indeed, as I came to the end of Heaven’s Vault I started right back up again, one of the few times I’ve bothered with a New Game Plus mode. In Heaven’s Vault you keep your translation progress but start the story over again, knowing a bit more than you did last time, and theoretically able to make better choices on how to proceed—or different choices, at least, allowing you to see events from a new viewpoint.

One day, maybe I’ll understand what happened to the Nebula.

Heaven’s Vault is flawed, but I stand by what I said after playing the demo last year: It’s like nothing I’ve ever played before. Inkle understands what makes interactive fiction interesting more than perhaps any developer out there. Heaven’s Vault thrives on discovery, be it your first glimpse of an alien planet and age-old ruins, or the more abstract thrill that comes from puzzling out its intricate language.

You’ll need plenty of patience to experience its high points, but I think those who do fall in love with it will really fall in love, seeking out secrets even after the story ostensibly ends—and I’ll be among them, sailing the rivers a second (and maybe even a third) time, hunting for another tattered scrap of map, another ornate plate, and the ancient words that coincide.