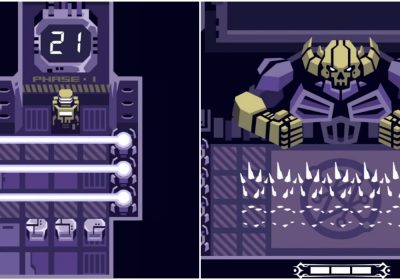 What’s better than a fun demon-girl collecting puzzle game that’s absolutely free? Free DLC of course. The Examtaker has expanded the already excellent Helltaker experience with a new bonus campaign that gives fans more of the hellish puzzle action while injecting a bit more action into the mix.

The Examtaker also brings back the classic challenge the base game is known for and then some, but luckily this handy guide will help you pass with flying colors. 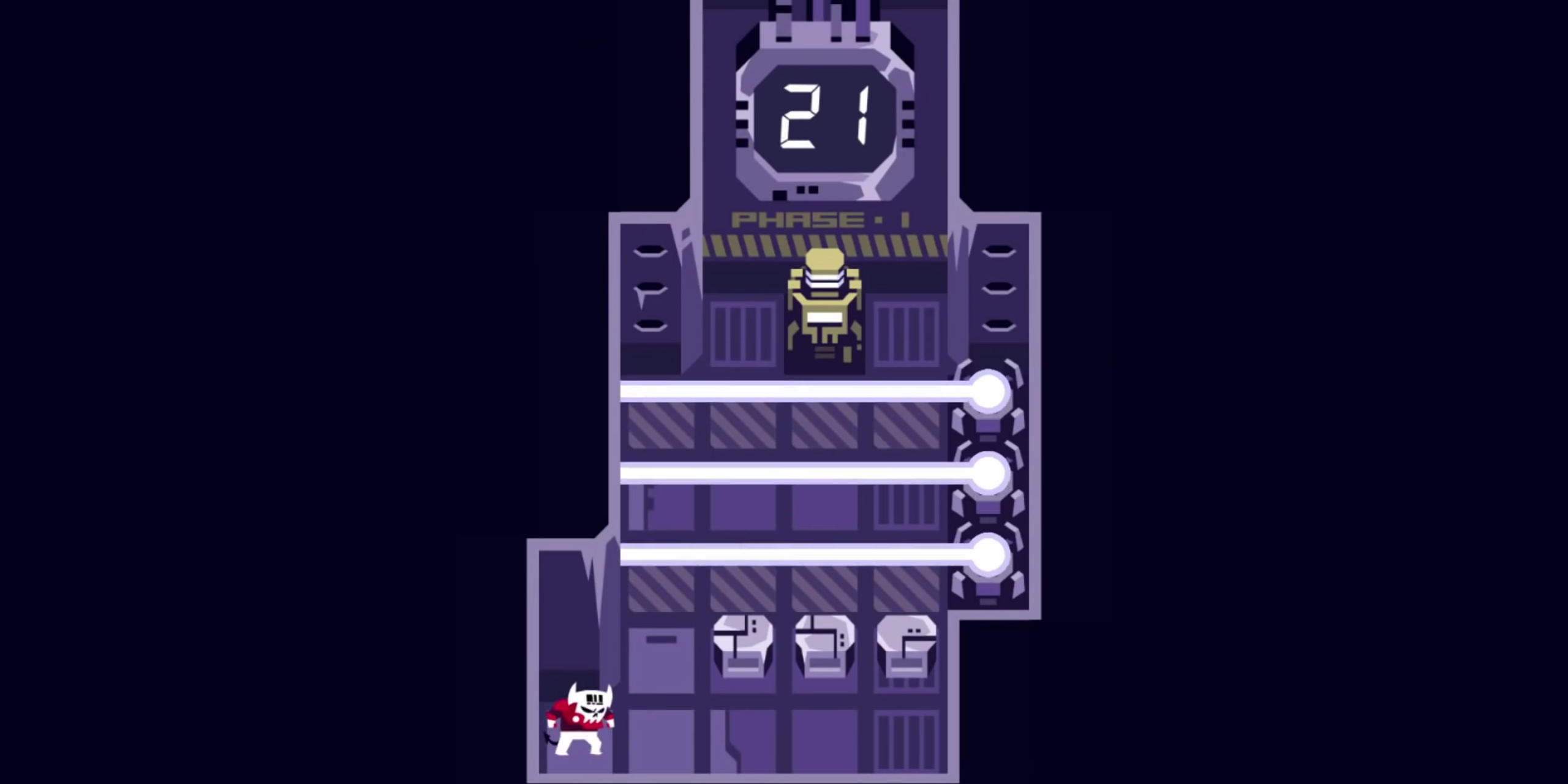 Your underworld exam will start off uncharacteristically easily with a narrow corridor featuring three lasers and three blocks. Start by kicking all the blocks into the first laser then kick the middle one into the second and the left one into the one at the top.

All you need to do now is get to the top and kick the block blocking the top laser towards the right and give yourself access to the strange switch there. Give it a good kick and you’ll have cleared the level. 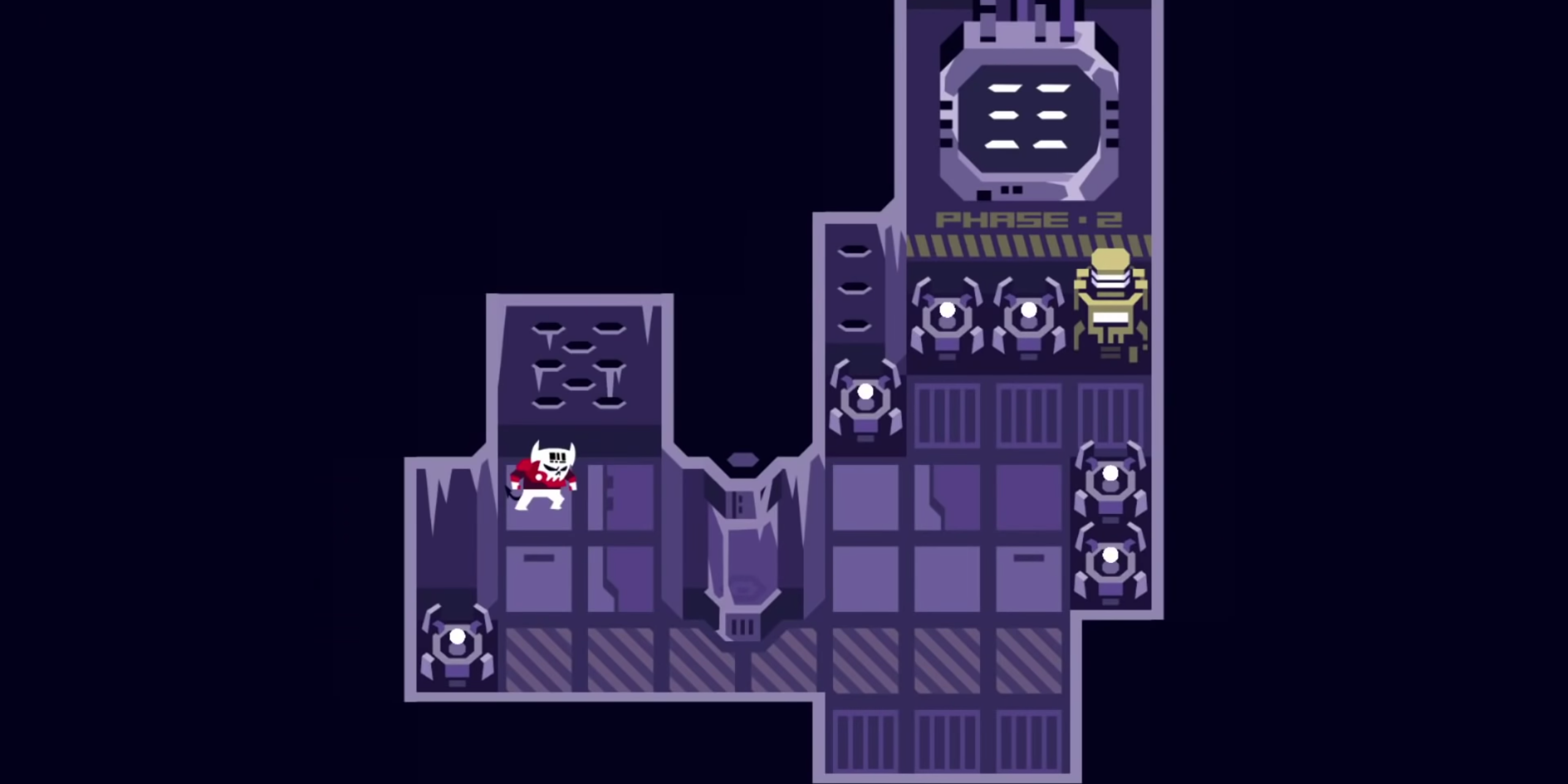 This is The Examtaker’s first action sequence and once again has you avoiding lasers albeit with no blocks and no move limits this time. These lasers are a bit different from the last ones, operating on a timer instead of shooting steady beams.

The important thing to remember here is that only three of the lasers will fire at a time, so all you need to do is position yourself in the gaps of each burst as you move forward towards the switch.

Once the coast is clear, run to the right for five squares then go down one square to hide from the next round of lasers. Then move up and to the right to dodge the following volley at which point you’ll be able to get to the switch. 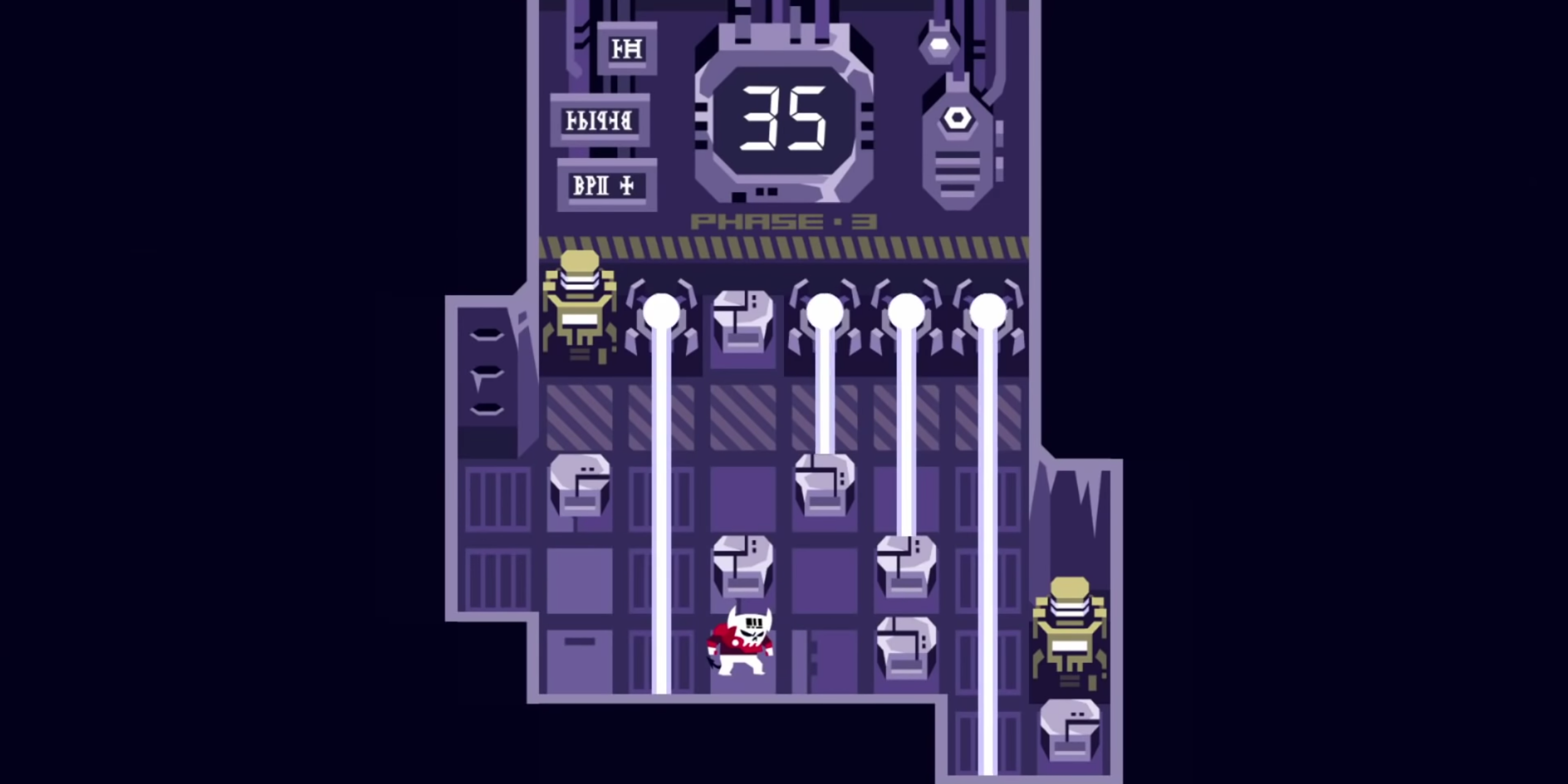 This is where The Examtaker takes the kiddy gloves off. You’ll have to start by kicking the block above you upwards and then moving right to kick the one to your side.

Then go up and kick the block above you before going up once more and kicking the block you kicked at the start to the left so it blocks the left most laser. Head back down and kick the same block straight up into the laser then go around the block to your left and kick it to the right to clear the path to the switch and give it a kick.

But as you may have noticed, this stage has two switches and you need to kick both of them to clear it. Remember the last block you kicked before getting to the first switch? Keep kicking it to the right until it’s up against the wall blocking the farthest laser.

Then go down two spaces so you can kick the block that’s stopping the second laser from the right upwards, giving yourself more space. With that, move to the right and kick the block before you downwards, and hit the second switch to clear the third stage. 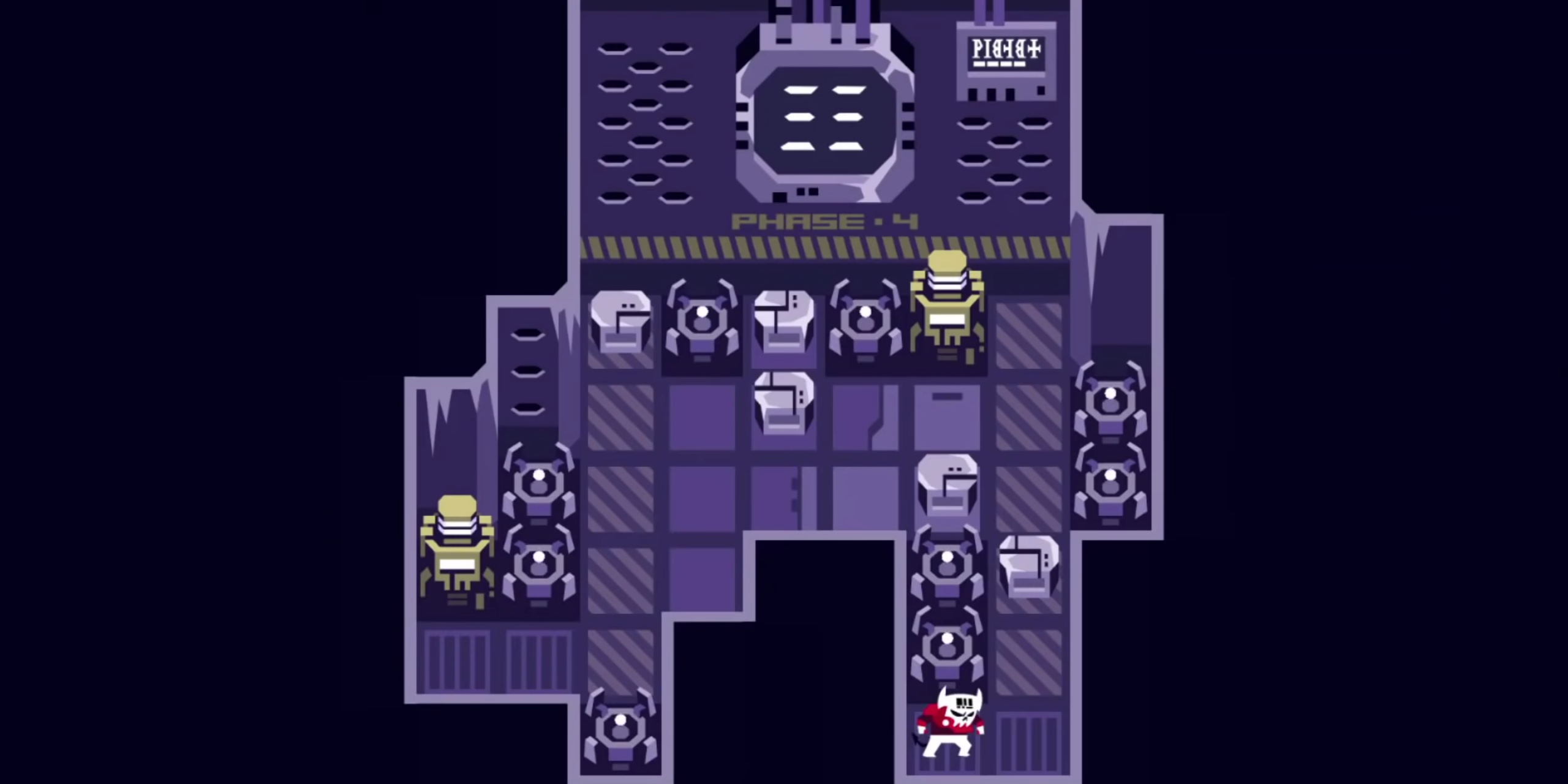 Another action stage that plays just like phase two but with blocks now. You’ll need to adjust the timing with which you maneuver around the lasers to give yourself time to kick the blocks, so keep that in mind.

Start by kicking the block above you until it’s in the top right corner but then quickly move one space down to avoid the lasers. Go back and kick the first switch, but then go back to where you were before to dodge the lasers once again.

With all that out of the way, you can run straight to the left while avoiding the lasers to kick the second switch and beat the stage. 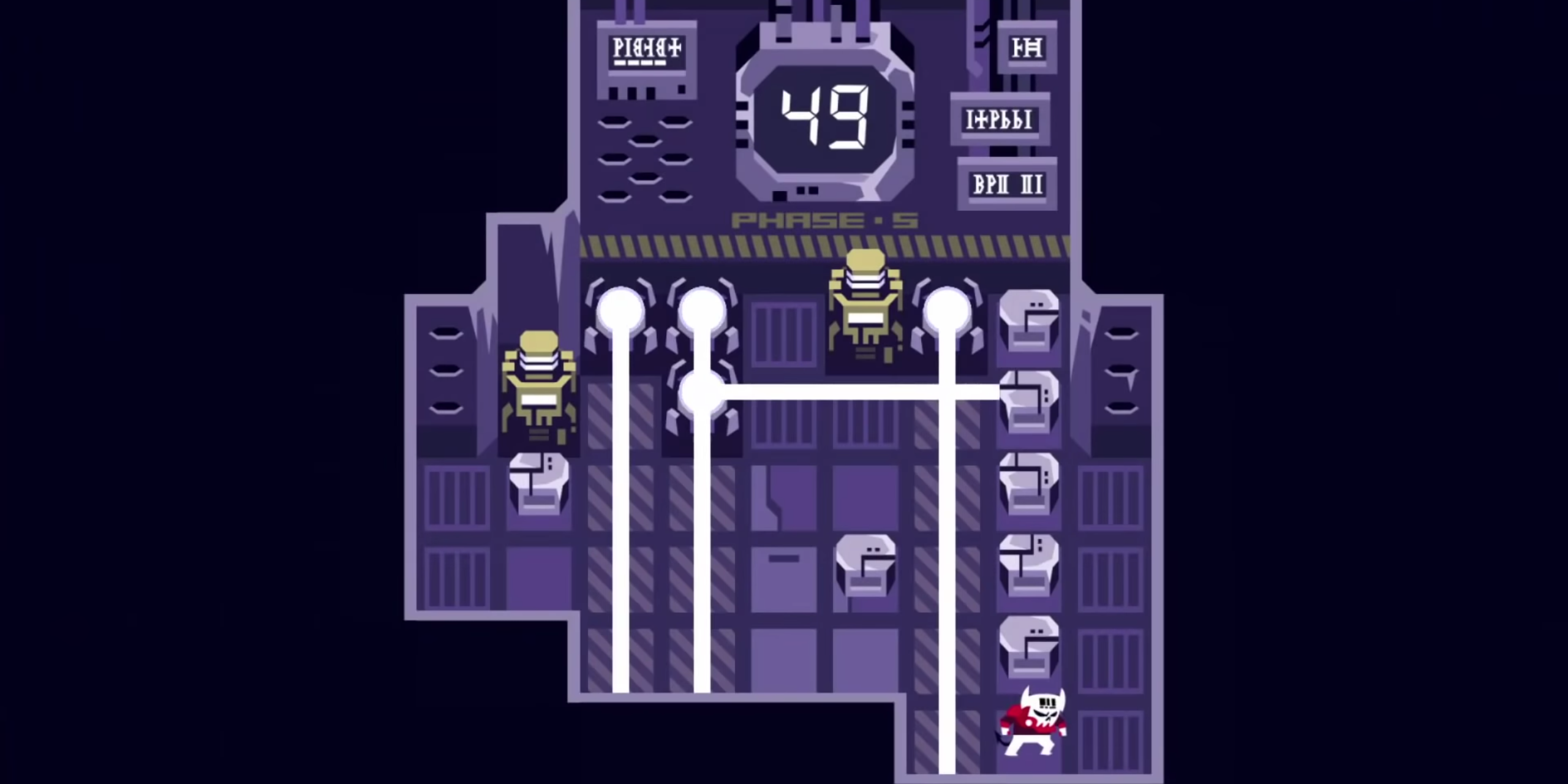 You’ll start this stage beneath a column of five blocks. Go right and kick the second one from the bottom to the left one space and then knock the one above it two spaces.

Kick the bottom block down to give yourself room to kick the block stopping the laser to your left upwards into the intersection between it and the horizontal laser.

Kick the blocks to your left until they’re both in front of the second last vertical laser and then kick the bottom one into the path of the final beam. Go down and knock that bottom block up as far as it will go and then kick the other block to your right.

Go around the block to your left and kick it to the right so you can kick the first switch. Kick that block right a second time and then go around it to kick the block to its right upwards so you’ll have a clear path to the second switch. 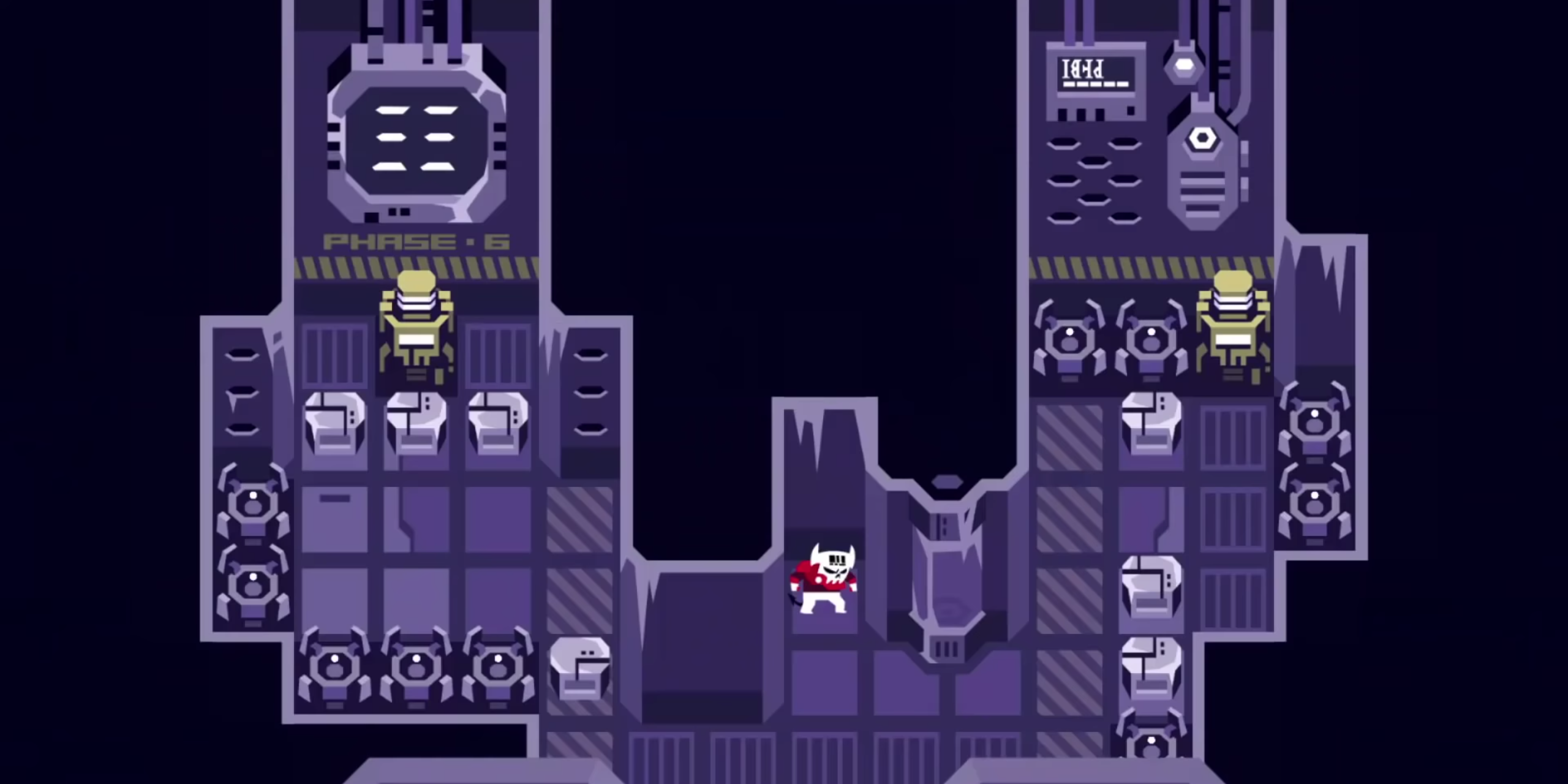 Action time again. Head right but wait for the coast to be clear before getting in the way of the lasers.

You’ll want to stop in front of the second block from the bottom to let the lasers shoot without hitting you. Then go around the blocks and kick the bottom one to the left and go up to kick the first switch and knock the top block two spaces to the left while being sure to avoid the lasers.

With the top left laser blocked now, you can freely go straight left to the next area and kick the first block in your way up two spaces. Once the lasers are out of your way it’s time to conquer the last area and all you have stopping you is a row of three blocks.

All you need to do is kick the one on the right up one space, do the same to the one on the left, then go back to knock the one in the center to the left and hit that switch for the win. Just make sure not to get caught off guard by the laser. 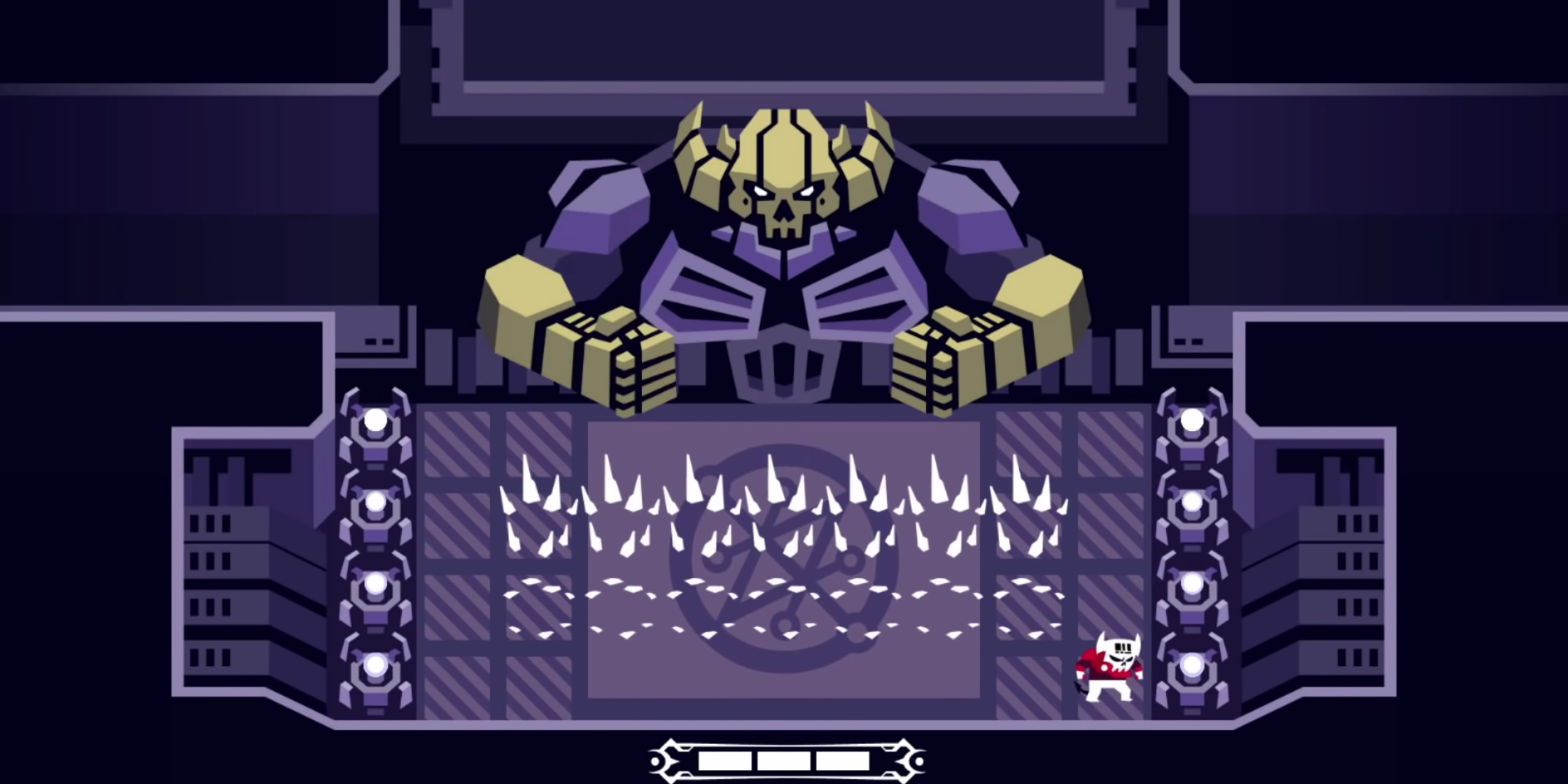 The final stage works a bit differently from the others, placing you in a chamber with nothing but two rows of lasers and a giant skeleton robot that sends shockwaves of spikes for you to avoid.

You’ll want to stick to the sides of the arena for this boss fight as they will tend to be the safest spots from the spikes, but the lasers will start going off before long, so keep an eye out for them. Speaking of lasers, you’ll need to keep an eye out for the skeleton robot’s giant chest beam which takes up the entire arena except for its farthest sides. Have we mentioned sticking to the sides?

Once the giant laser is gone make a break for the giant robot and kick him in his cannon. He’ll be down but not out, so get ready for the next round. It will start off just like the last one, but once the spikes and lasers are gone, the boss will start firing from the rocket launchers on his sides.

These things will hit the farthest sides of the arena often, but they’re pretty slow so stay on the move and avoid the white symbols that indicate where they land, but be sure to run back to the sidelines before that giant chest beam comes back out and then hit the boss where it hurts.

The fight’s third phase will have you pretty hot under the collar, with spikes, lasers, and missiles all at once. The best way to stay safe is not to keep to the sides, but near them.

The generally safest space is in the lower half of the arena and one or two squares away from the walls. Just make sure you avoid the lasers on the sides. They can catch you off guard if you’re not paying attention and in this phase, they keep firing while the skullbot shoots his chest beam so keep avoiding them up until you land that final kick on the boss’ weak spot to pass your exam. That wasn’t so hard, was it?