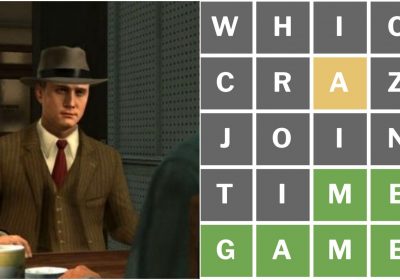 Wordle launched last year and to begin with, the simple puzzle game was enjoyed by a few thousand people each day. Pretty cool for a concept thought up and created by one man for his wife. A few months later, the game has gone viral and everyone and their mom was playing it. By January of this year, the site that hosts Wordle was visited 45 million times in a single month, and the New York Times had bought the game for a seven-figure sum.

Wordle's popularity remains, and the game has also spawned countless spinoffs with a variety of different themes. Now, there is finally one all of you reading this have been waiting for. A video game version of Wordle called High Score Day. It isn't as simple as guessing the name of the day's game, though, and your video game knowledge will need to span an incredibly long period if you want to get that high score.

Each day, High Score Day plays host to five new screenshots, each from a different game. The aim of the game is to correctly guess what games the screenshots have been pulled from. Each correct guess earns you a point, or a life, and you need to try and guess all five correctly. That's it. It's a simple concept, but as was the case with Wordle, that's kind of the point.

High Score Day is actually closer to Framed than it is Wordle, although Framed is a Wordle spinoff itself. Framed is for movie buffs and also presents players with a series of screenshots each day. The difference between it and High Score Day is that Framed's screenshots are all from the same movie, and the aim is to correctly guess what the day's movie is in as few screenshots as possible.

As touched upon above, there are so many Wordle spinoffs at this point that it would probably be impossible to play them all in one 24-hour period. There's one for meteorologists where you have to identify weather patterns, Heardle which tasks you with correctly identifying a song, and Nerdle which needs you to piece toegther equations. There's even a Pokemon-based Wordle spinoff called Squirdle, because of course that's what it's called.