Home » News » Hitman 3: How To Get Silent Assassin, Suit Only On Mendoza

Hitman 3: How To Get Silent Assassin, Suit Only On Mendoza 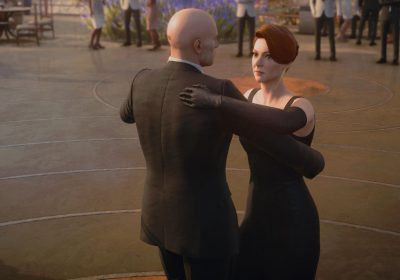 In Hitman 3, to complete the Silent Assassin, Suit Only challenge in Mendoza, you’ll have to eliminate both Yates and Vidal without being detected, killing anyone else, or wearing any disguises. No bodies can be found either which can be tricky in such a populated map. This guide will tell you exactly where you need to go, but you will need to have unlocked the two basement shortcuts to get the fastest routes. These can be unlocked from the inside of the basement which you can access from the ground floor of the villa. Although it is still possible to do Silent Assassin, Suit Only without the shortcuts, you will need a lockpick to open certain doors, which is noted in this guide just in case.

Your first target is Yates, the lawyer hosting this party who is hiding in since spacious villa at the top of the hill. Despite the high security, it’s not too difficult to get to him if you know where to go. Starting at the parking lot, immediately turn away from the party and hop over the left side of the parking lot barrier. You’ll be trespassing so be careful, but if you stick to the left side you shouldn’t be noticed. Make your way towards the back of the lot and you’ll see an open window on the right side. Hop through and continue down the tunnel. 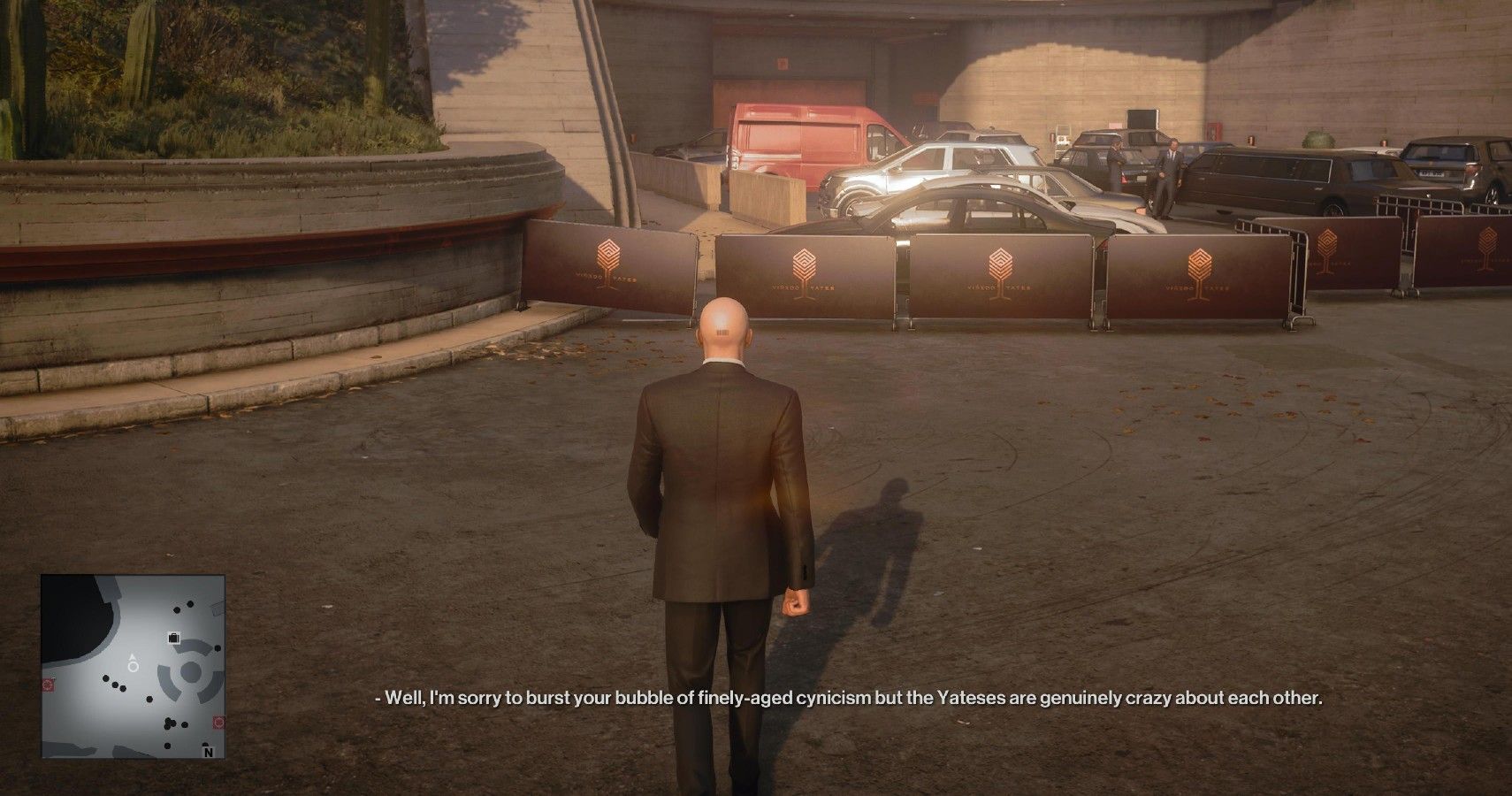 Once you’re back outside, take a right and jump over the wall to enter the Lower Gardens. You’ll still be trespassing so use the flowers to conceal your approach of the back of the villa on the hill. Once you’ve made it to the door of the back garden, head around the left side to find some ledges you can climb. Hang on the ledge while the guards talk about the safe in the basement. When one of them moves along, you can climb up and the remaining guard won’t see you, but be careful, others might be patrolling.

Now that you’re next to the villa, you should see a pipe on the corner nearest the backdoor. Climb up onto the roof, then climb again onto the balcony. From here you’ll have to wait for Yates to finish his route. His wife should arrive about a minute before him, so subdue her before she goes out onto the balcony and hide the body to make the kill easier. When he arrives, use whatever means you want, and if you’ve been into the attic there are a lot of means, to eliminate him and hide the body with the wife. 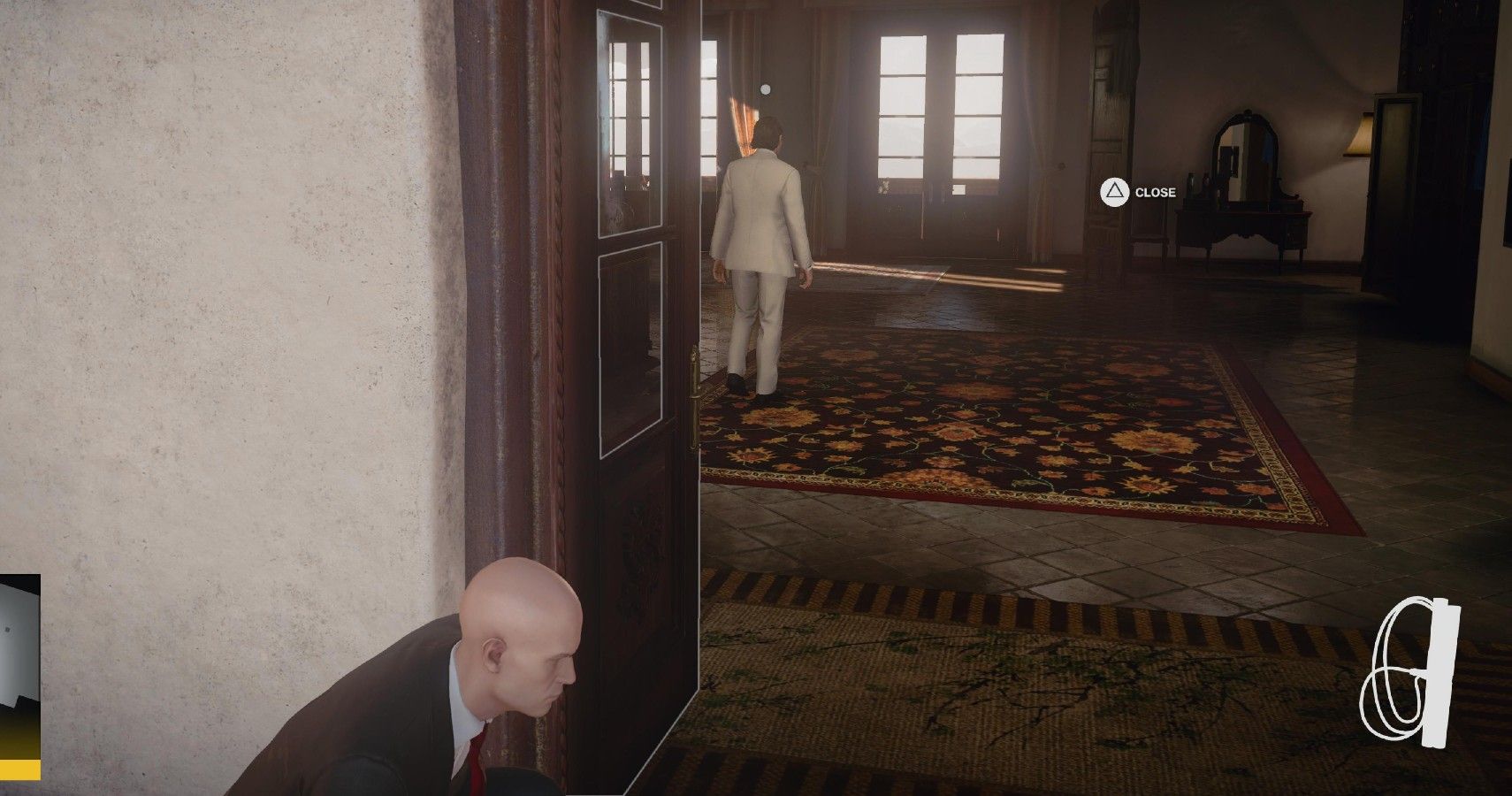 Killing Yidal With No Witnesses

With one target already done, you’ve only got one target left, unfortunately, she is much trickier to catch alone. She walks around a large circuit of the party, constantly followed by Diana and two personal guards. Thankfully, Diana won’t report any bodies or murders she happens to witness, but you’ll still have the two enforcers, and everyone else at the party, to look for. Start by heading back down into the Villa Backyard the way you came, climbing back down from the balcony. But rather than leaving through the meadows, head to the other side of the backyard, and downstairs leading to the basement shortcut. Head down through the basement, making your way to the second shortcut door, avoiding the guards, until you reach the staff area and the staircase leading down to the security room. Be careful as there is a staff member looking in your direction here, distract him and head down the stairs undetected.

If you don’t have the shortcuts open, you can instead head down the cliffside path near the basement entrance. Avoid the guards and keep heading towards the party. Before you get there, you’ll spot a door to the right leading into the cliff. Pick the lock and follow the corridor all the way through, dipping into the armory to avoid the camera and stationary guard. Cut straight across the room with the two guards to head down the corridor that leads to the security room. 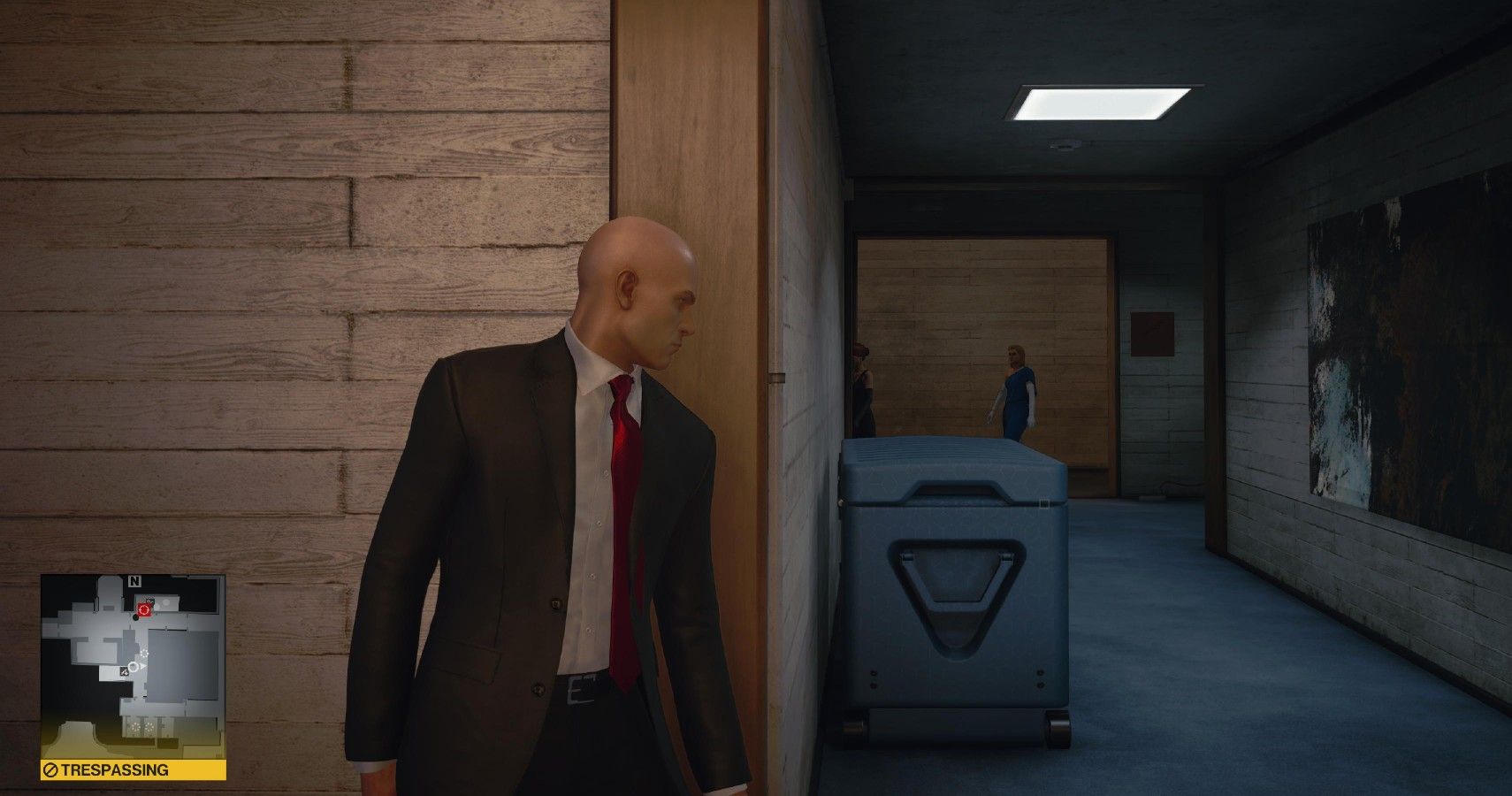 Now at the security room from either route, you’ll have to knock out all three of the guards inside. Vidal comes here as part of her route, and this is the most secluded area you’ll find her in without putting on a costume, so its time to remove the other witnesses. If you’re struggling, try using the photocopier in the corridor just outside the security room. This will attract one of the guards and make the other two much more vulnerable. Hide the bodies in the long corridor behind the door of the security room, as no one goes that way. Don’t use the nearby box as you’ll need it for Vidal.

With all the guards out the way, you’ll need to wait for Vidal, Diana, and their two guards to make their way into the security room. Stay out of sight near the photocopier, as you’ll need it in minute. Its also a good idea to save here, as things can be a little unpredictable at this point. Once they’ve arrived, turn on the photocopier again to attract Vidal. As soon as you’ve done that, head towards the stairs that Vidal and Diana came down, so you’re out of sight. One of the guards will follow Vidal so the plan changes depending on how fast he comes up behind her. The simplest method is fall in right behind the guard, use a nonlethal object, like the fire extinguisher, to knock him out, and then throw it at Vidal before she can turn around. Both bodies can then be quickly hidden down next to the photocopier the stairs before Diana and her guard make their leave. 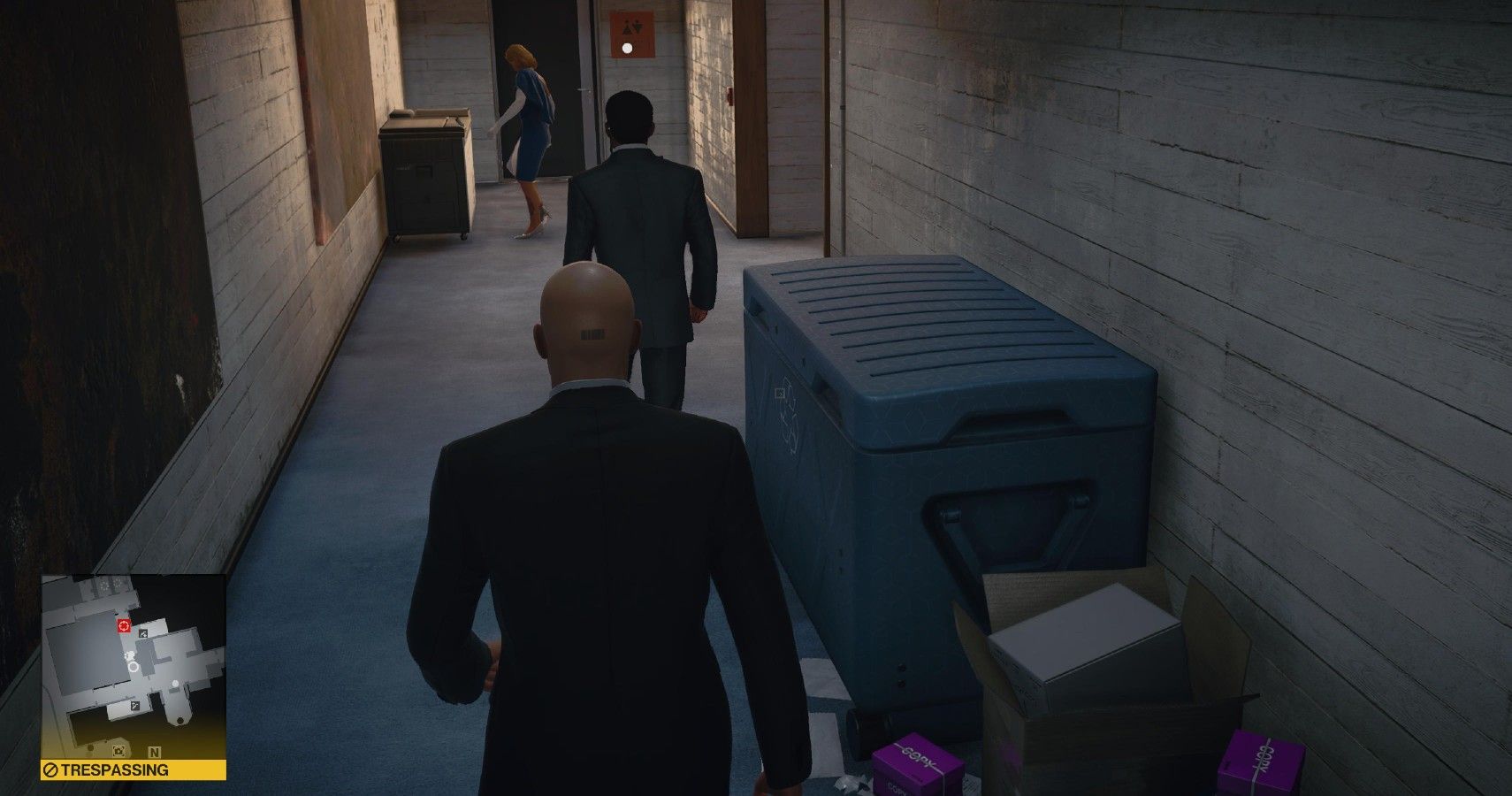 If this is proving difficult, you can always try and knock out the guard and hide his body in the box near the photocopier before Vidal sees. Then you’ll have to wait for them to come all the way back around before once again turning on the photocopier and luring her out, this time alone.

Sometimes the guard doesn’t follow Vidal, and if this happens its even easier, simply kill her and hide the body before Diana and the two guards walk past.

Escaping Mendoza in the Classic Suit

After taking out Vidal in the Security Room, you’ll have a remarkably easy route to escape. Although you’re currently trespassing, the second you use either of the doors in the corridor, you’ll enter the party space and be completely concealed.

Once at the party all you need to do is make your way to the nearest exit, since you aren’t trespassing you can take your time and take one of the more distant routes (but be careful as some will lead you through restricted areas), or you can simply meet Diana on the dancefloor for a perfectly harmless Tango.

Once completed, you should see Silent Assassin, Suit Only unlocked on the debriefing page.

Next: Here’s What’s Coming To Hitman 3 In February 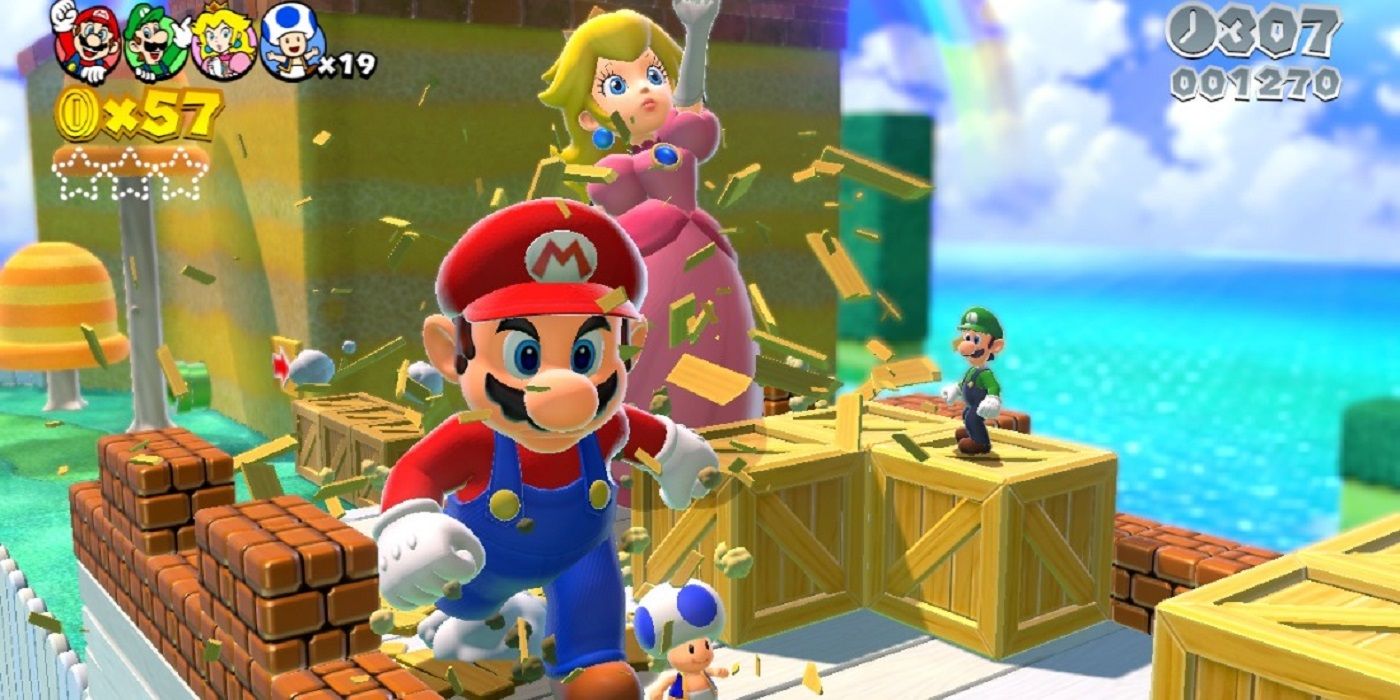