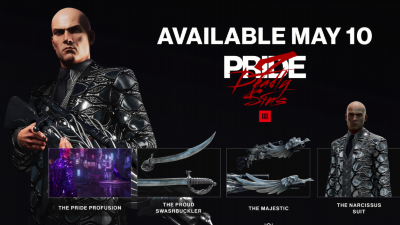 Hitman 3’s next themed season has been revealed, and this month it’s the Season of Pride, taking place in Chongqing. The Hitman community doesn’t seem too happy about the content though.

Last week saw the end of the Season of Greed, Hitman 3’s first season of content. IO Interactive has now announced that the next season will be themed around Pride, and has released a new trailer showcasing some of what to expect.

Included in the Season of Pride is a brand new suit for 47, the “Narcissus suit”, which might just be his flashiest yet. Players can also unlock a unique sword, and a unique sniper rifle themed after pride. All of this can be unlocked through the season’s Escalation mission, The Pride Profusion, which will take place in Chongqing.

The brief trailer reveals that the Season of Pride will arrive on May 10, the day that the Greed season ends. No roadmap has been officially revealed yet, but that should happen in the next week or so, revealing this month’s Elusive Targets and community-made contracts.

Reactions to the season seem to be a little mixed. The YouTube comments for the trailer call out the inclusion of another sniper rifle that won’t match up to the fan-favourite Sieger 300 Ghost, as well as another melee weapon that the community doesn’t seem interested in using. This is an opinion that is also shared by the game’s Reddit page, so it looks like the Hitman community isn’t very interested in these seasonal updates.

The general consensus seems to be that each season’s content seems to be largely the same and that the new missions are just escalations rather than doing something more interesting, especially when taking into consideration that this is all paid DLC and not just free content updates being added to the game. Each season is also introducing new Elusive Targets and contracts, but it seems that the fan base wants to see more than just new suits in a different location each month.