Homefront: The Revolution’s Hidden TimeSplitters 2 Codes Were Unwittingly Ported In 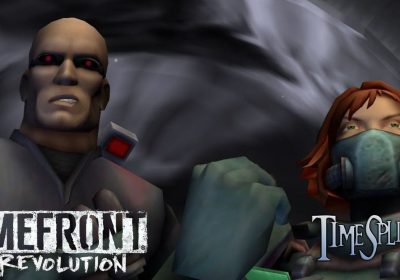 The discovery of a fully playable version of TimeSplitters 2 being hidden in Homefront: The Revolution this past weekend was a tremendous find for retro gaming enthusiasts. Despite fans clamoring for a modern re-release of the TimeSplitters trilogy, THQ Nordic has been reluctant in putting any of the classic PS2 titles on newer systems. With this Easter Egg, fans can at least play one of the games on current-generation hardware. Interestingly, though, it seems that the full game was never intended to be unlockable in any form.

A new report from Eurogamer has revealed that developer Dambuster Studios (responsible for Homefront) unwittingly ported the codes into its 2016 shooter. After speaking with sources close to the studio -who have remained unnamed-, it turns out the studio didn’t even learn of the codes until after Homefront: The Revolution had shipped. The original Easter Egg was only ever intended to be the first two levels of TimeSplitters 2, but porting over all of the original game files with a soft lock on later content was the easiest method given time constraints.

As you can surmise, those hidden unlock codes were a part of the porting process. One of the sources Eurogamer spoke to speculates that these codes were likely included in TimeSplitters 2 for testing purposes or to show off different levels at public events. It explains why accessing later levels within Homefront: The Revolution will sometimes crash the game as Dambuster never tested past the initial two levels.

It’s certainly an interesting turn of events for an Easter Egg that many hadn’t thought much of in roughly five years. Homefront: The Revolution may still be a rather unremarkable shooter, but it’s probably going to see a big uptick in sales thanks to the discovery of these codes.