Horizon Call of the Mountain Will Launch With PS VR2 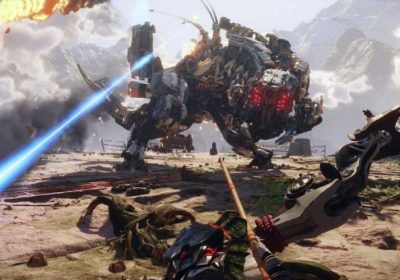 As promised, Horizon Call of the Mountain will launch with the PS VR2 on February 22. We got the news of PS VR2's impending arrival earlier this month, and today Guerilla Games has confirmed the coming Horizon spinoff with a new pre-order trailer.

Pre-orders for Horizon Call of the Mountain are now live with the game being priced at $69.99 USD. That's the same as most triple-A new releases these days, so players can hopefully expect quite a few hours in this more-immersive world of Horizon.

Guerrilla Games also gave us a few hints on what to expect in Horizon Call of the Mountain on its website. "In Horizon Call of the Mountain, you step into the shoes (and put on the gloves) of Ryas, a former Shadow Carja Warrior searching for redemption," wrote the Horizon developer (although the VR game is made with the help of Firesprite). "Haunted by a difficult past and scouted for a dangerous task, Ryas has been offered freedom only in exchange for investigating a new threat to the Sundom."

That dangerous task is apparently to climb to the top of a big, scary mountain to figure out why the robot creatures that populate the world of Horizon have started attacking. As a master climber, Ryas will use his twin pickaxes to scale the mountain, and as a master archer, he'll shoot any marauding robots that get in his way. And judging by the gameplay revealed back in September, there will be plenty of robots that will get in Ryas's way.

That gameplay also revealed how Horizon Call of the Mountain will implement innovative new gesture controls for Ryas's movement. Climbing will require a hand-over-hand motion, while walking will mean swinging your arms back and forth as though you were actually walking. Hold up both your hands in a protective fashion to dodge backwards, and draw back your arm with the other held straight to fire a virtual arrow. It all looked pretty natural in the footage from Eurogamer, although some fans will be relieved to hear that stick controls are also available.