Horizon Zero Dawn: The 10 Best Outfits (& How To Get Them) 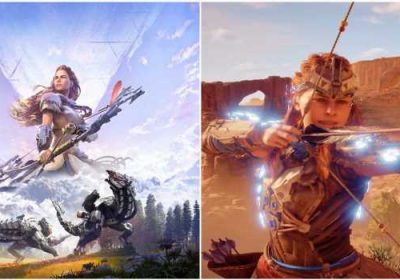 In order to brave the wilderness of the reborn world of Horizon Zero Dawn, Aloy has access to many different outfits to help her survive both the frozen wilds of the Banuk territory as well as the corrupted machines of her homeland of the Embrace. While most of these outfits have a use in some capacity, some are more useful than others.

By the end of the game, you should have access to around a dozen different outfits, with some simply being upgraded versions of the same armor, though some can be quite easy to miss, as they are only bought from certain vendors or are connected to a side quest in some way. 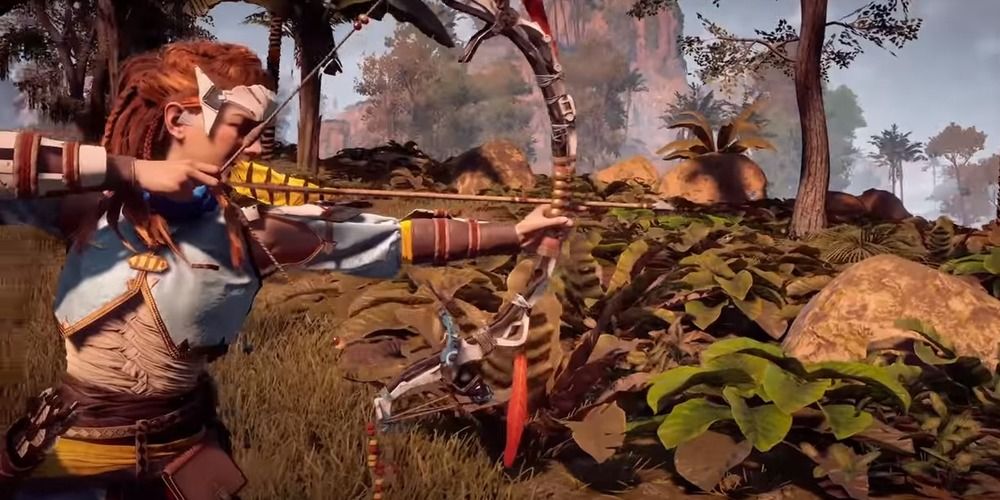 The Carja Silks is the most basic armor in the game, providing no inherent resistances or buffs of any kind, and is comparable to the Nora Brave armor given to Aloy by Teb before The Proving. However, it does have the advantage of having an additional modification slot and allows the Carja Silks to function in just about any way you can think of. The Carja Silks can be found fairly early on, being available from armor merchants in Meridian and Sunfall, though it can be very expensive the first time you visit the cities. 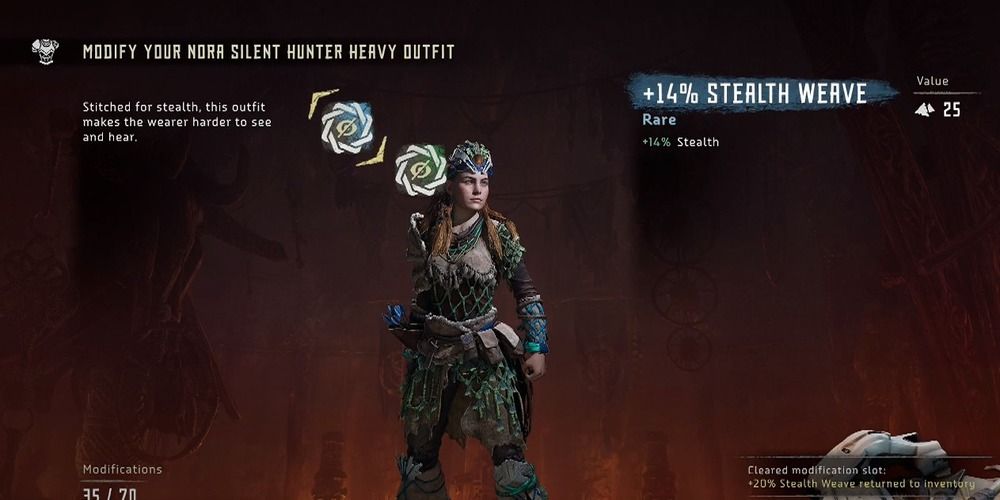 One of the most useful outfits for both the early game and going into the late game, the Nora Silent Hunter armor can be bought from Teb before Aloy becomes a Seeker, so long as you have enough Shards. As the name suggests, this armor boosts Aloy’s already impressive stealth capabilities by a considerable amount and is very useful for taking down bandit camps, completing hunting trials, or simply picking off Watchers one at a time without them becoming suspicious. 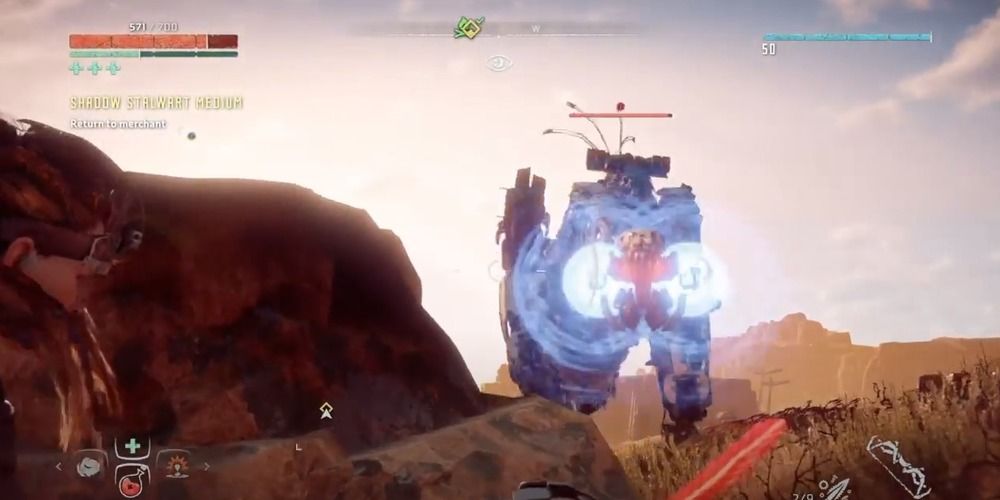 Despite the name, the Arrowbreaker armor is useful against all projectile weapons, not just arrows, so it is useful not only against bandits, but Stalkers, Ravagers, and Thunderjaws as well and goes a long way in ensuring you don’t die against the latter. The Oseram Arrowbreaker armor can be bought from most armor vendors after reaching Daytower, with one of the earliest being found along the Way of Broken Stones.

On higher difficulties, the Arrowbreaker armor is somewhat mandatory, as many projectiles can melt through Aloy’s health very quickly when attempting to beat the game on Very Hard or Ultra Hard. 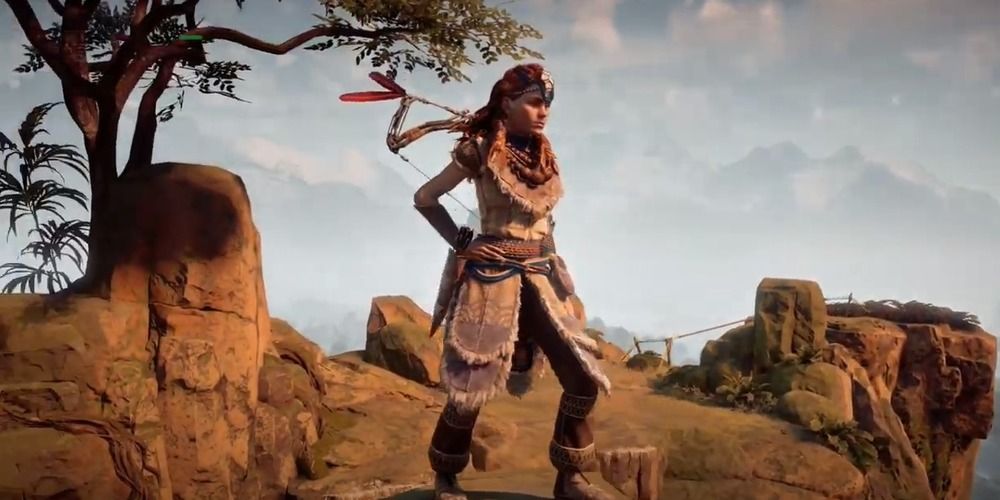 While shock damage isn’t all that common, it is usually found on some of the more deadly machines in Horizon, so being able to resist this damage is a good side effect of any armor. The Oseram Sparkworker, as the name suggests, increases Aloy’s shock resistance, which is particularly useful against Stormbirds and Shellwalkers. Like the Arrowbreaker armor, the Sparkworker armor can be found in most armor vendors past the Daytower, with the Way of Broken Stones and Meridian being the easiest vendors to find. 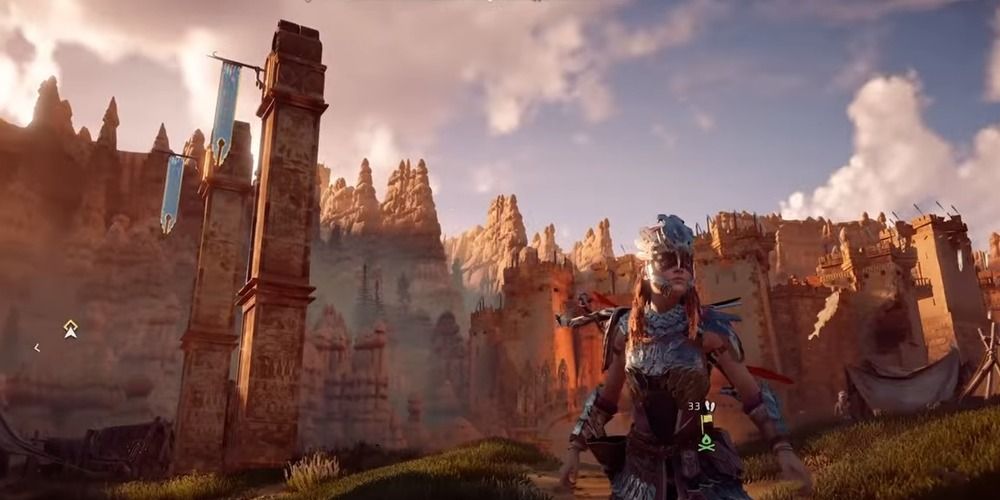 This unique armor can only be obtained after completing the Terror of the Sun main quest and allows Aloy to infiltrate the Shadow Carja territory undetected for the following quests. However, it also has a secondary effect of making Aloy immune to blinding or sonic effects that can be detrimental if you succumb to them, as they stun Aloy for a few moments and usually obscure your vision. This makes it particularly useful against Watchers and Longlegs, who like to initiate combat by either blinding Aloy or blasting her with sound to get the upper hand. 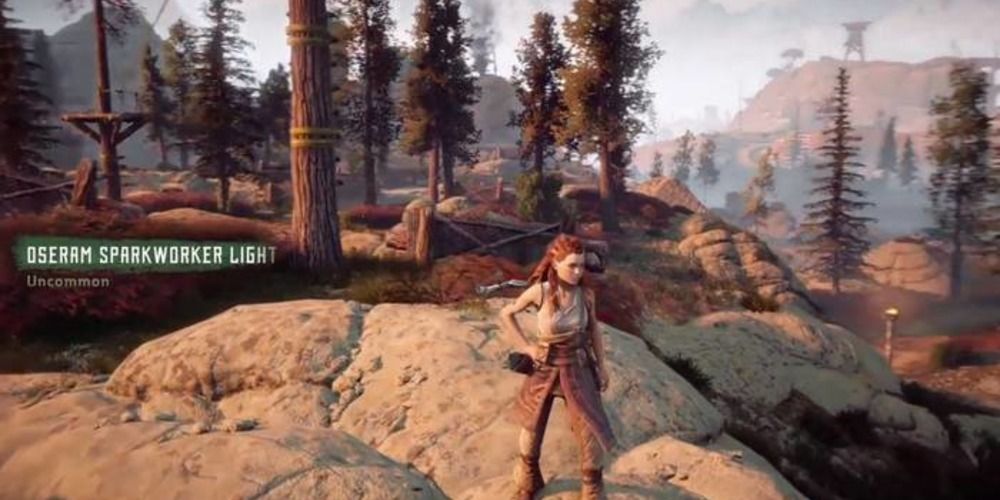 While most armor in Horizon has a niche use that increases a certain resistance, there are a handful like the Carja Silks that are a little different. Another of those outfits that is somewhat unique is the Nora Survivor armor, which, like the Nora Silent Hunter, can be bought from Teb before The Proving and is one that should be taken before the battle against Helis and his men. The Survivor outfit is a  jack-of-all-trades armor that increases resistances to shock, fire, freeze, and corruption and is generally useful in all situations, though especially when you are forced to fight multiple different machines, such as in the climb up the Metal Devil in the final quests. 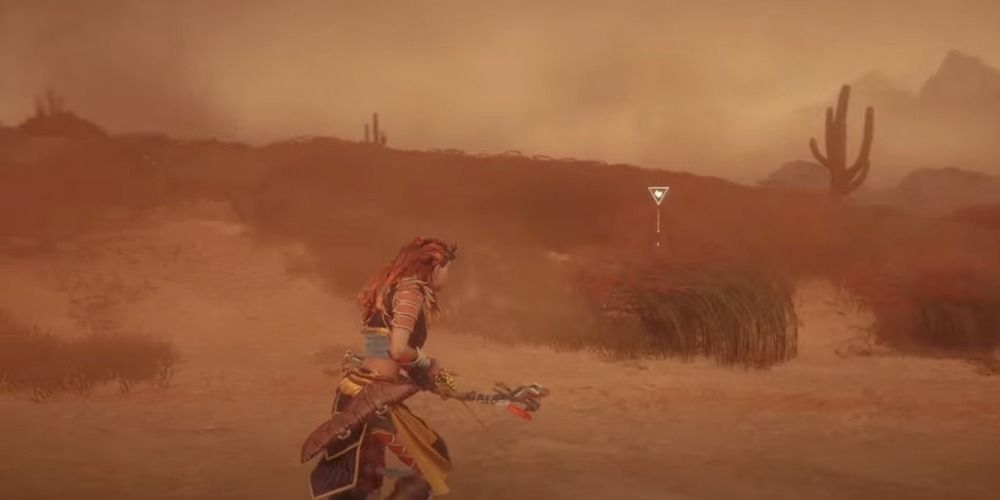 Fire is one of the most deadly damage types when left unchecked, as it can deal significant damage to Aloy if you are not careful or paying attention to her health bar. The Carja Blazon outfit helps in this regard and increases Aloy’s immunity to fire damage substantially. When combined with a fire-resistance potion, this makes her nearly immune to all fire damage.

Like most armor, the Blazon outfit can be obtained in most areas following the Daybreak tower, though is also quite expensive and you may not be able to afford it the first time you see it. However, it is very useful against Fire Bellowbacks and can help prevent Aloy from dying if you aren’t familiar with them. 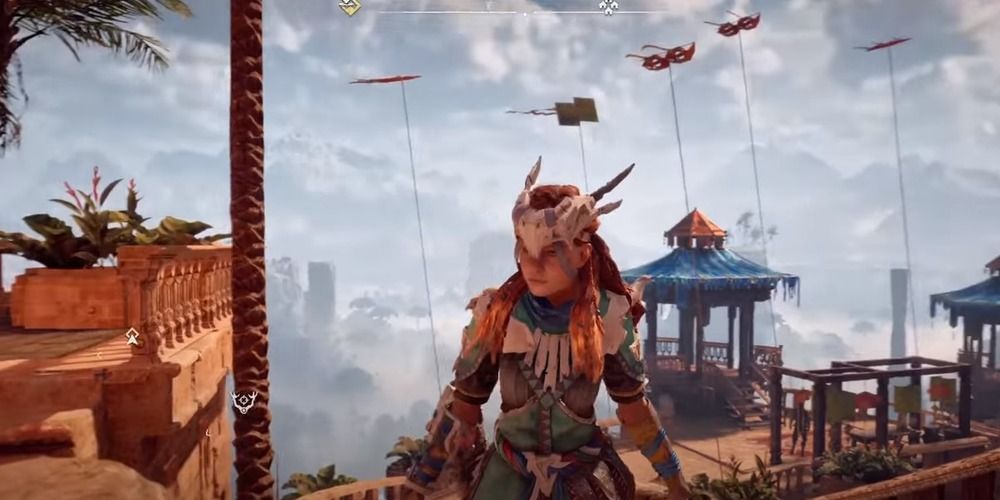 This strange-looking armor functions like a freeze version of the Carja Blazon armor, increasing Aloy’s resistance the freeze damage rather than fire. Unlike the Blazon armor, the Ice Hunter armor can be obtained from vendors around the Embrace and is one of the earlier armor sets worth getting. It should be noted, however, that there aren’t many enemies around the Embrace that actually deal freeze damage, as the majority of machines that do use it are the Glinthawks, Snapmaws, and Freeze Bellowbacks, enemies that aren’t found extensively until after passing through the Daybreak tower. 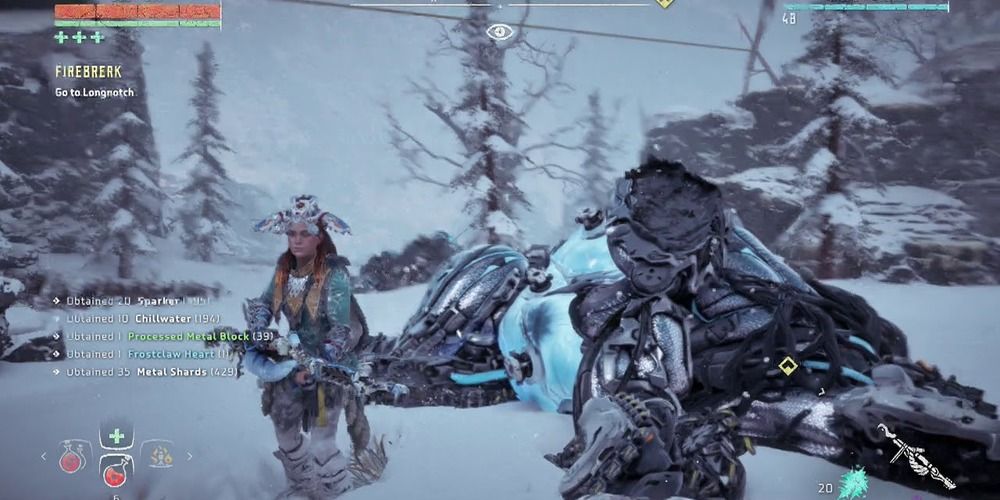 The only armor that is limited to the Frozen Wilds DLC, the Werak Chieftain armor is unlike any other armor in the game and causes passive health regeneration rather than any elemental resistance or stealth buff. This makes it very useful in just about every situation where the Shield-Weaver armor isn’t and goes a long way in ensuring you aren’t burning through healing items on higher difficulties after a tough battle. This armor is obtained after completing the quest For The Werak and can only be bought once this quest is completed, where it can be bought from Bluegleam vendors. 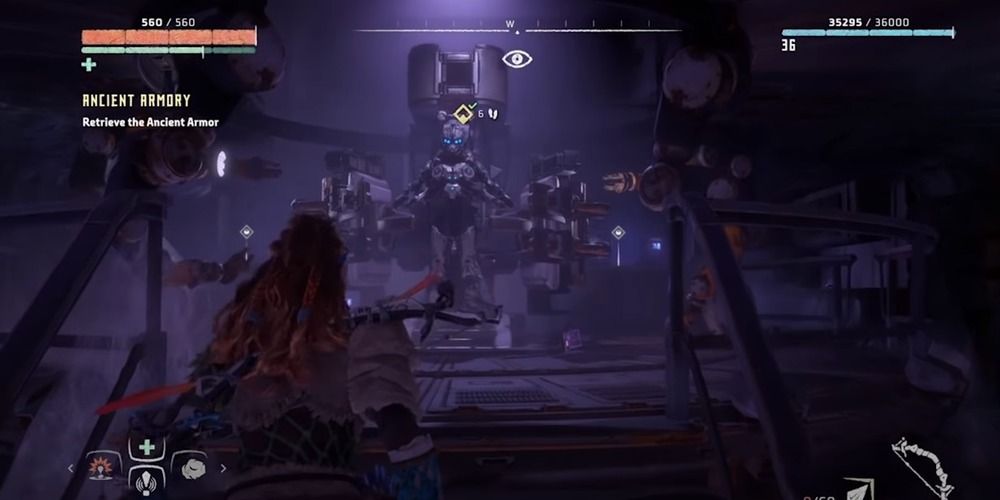 One of the best armor pieces in the game can’t be obtained until right before the final battle, but it is worth obtaining for that fight alone. This side quest requires obtaining five Power Cells scattered across the world, the majority of which are locked behind main quest specific areas, including GAIA Prime and the Grave-Hoard. The Shield-Weaver armor has no modification slots, but will instead grant Aloy a force field around her that absorbs damage equal to her current health stat and regenerates over time once depleted. This armor is almost mandatory for attempting a New Game+ run on higher difficulties since many machines will be able to kill Aloy in one blow without it.

Next: 20 Games To Play If You Loved Horizon Zero Dawn 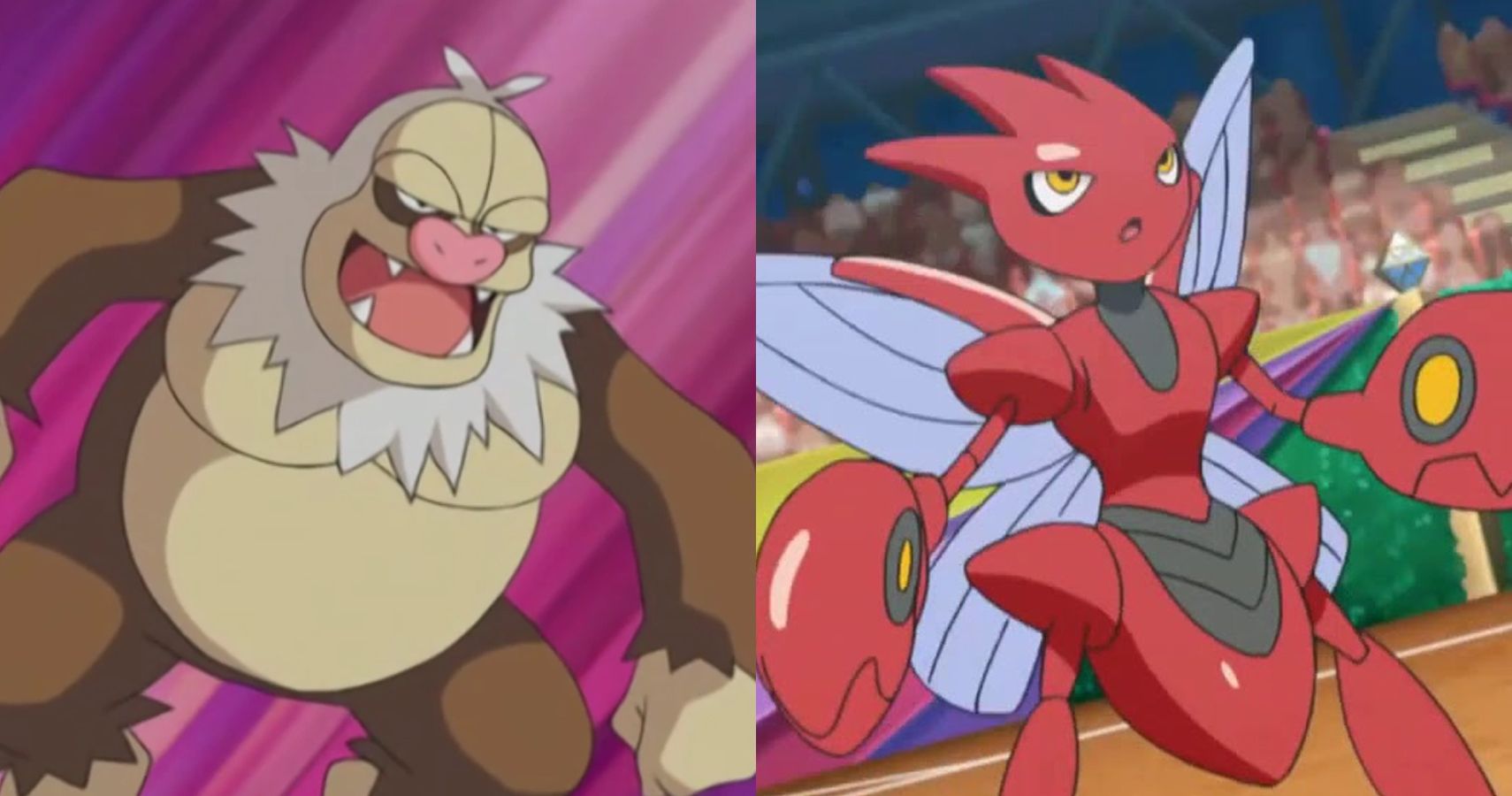