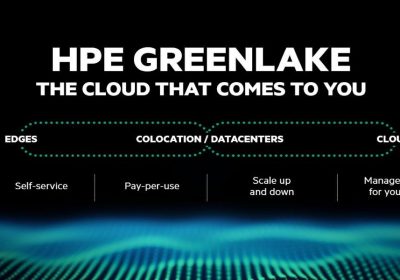 Starting at 100 virtual machines, the entry-level GreenLake service will become available in the first half of this year, while the bare-metal service is scheduled for the second half of 2021.

In addition, HPE has tightened integration with the wireless and wired networking infrastructure from its Aruna subsidiary. The goal is to make an edition of HPE GreenLake available for remote managing networks based on switches and access points provided by Aruna.

Finally, HPE announced it has added backup and recovery services to HPE GreenLake and expanded its partnerships with CyrusOne and Equinix to make HPE GreenLake available via co-location hosting providers. The partnerships make it possible to deploy the control plane for the HPE GreenLake service closer to where HPE server and storage infrastructure is deployed.

HPE reports it has generated more than $4.5 billion in total contract value from more than 1,000 customers. In the first quarter, the company said it grew its annualized revenue run rate (ARR) by 27% year over year.

Much of that growth came in the middle of a pandemic that drove more customers to rely on managed services, said Keith White, senior VP and GM for HPE GreenLake Cloud Services. “It created, or exposed, a lot of holes people had,” White said.

Historically, a managed service is provided by a third-party IT services provider. However, vendors such as HPE and Dell Technologies are embracing cloud operating models to enable organizations to consume IT infrastructure running in an on-premises IT environment the way they consume public cloud services. Over the life of the contract, HPE not only manages that infrastructure, it also provides upgrades at specified intervals.

It’s not clear what percentage of IT organizations are embracing that model as an alternative to hiring an internal IT staff to acquire, provision, and manage IT infrastructure. HPE is making a case for a cloud operating model that enables organizations to devote more of their internal IT resources to building and deploying applications, White said.

Despite all the workloads moving into public clouds, the bulk of enterprise applications still run in on-premises IT environments. Some reasons for staying on-premise are security and compliance requirements, as well as application performance issues that arise when applications are accessed over a wide area network (WAN). Rather than migrating workloads and all their associated data to the cloud, White said the HPE GreenLake service provides all the operational cost benefits of a public cloud with less overall disruption.

It may be a while before the cloud operating model becomes dominant in enterprise IT environments. There are still plenty of organizations that prefer to treat the acquisition of IT infrastructure as a capital expense they write off over time. Regardless of preference, however, the decision whether to buy IT infrastructure or consume it as a service is becoming a lot more nuanced.