I Am Jesus Christ Rises Again With Prologue Coming December 1 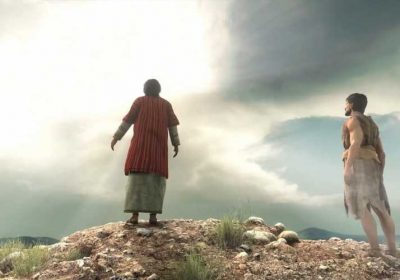 Our lord and savior has finally returned. First announced back in 2019, I Am Jesus Christ will finally be released on Steam in December, if only in prologue form.

For those who haven't been awaiting the return of the messiah with bated breath, I Am Jesus Christ was first announced several years ago as a simulation game where you play as the son of God, recreating his story as told in the Bible. That means performing various miracles like healing the sick and feeding the hungry, walking on water, turning water into wine, and more. The game will stretch from Jesus's baptism all the way to his resurrection, and yes, at some point Jesus will have to fend off Satan. Whether that's metaphorical or literal hasn't been revealed just yet, but I'm hoping Jesus gets to throw some fireballs at Beelzebub.

I know fireballs aren’t exactly a holy power attributed to Jesus, but the game sure does look a lot like Skyrim, and Skyrim had fireballs, so why not Jesus? Although the game might look like Skyrim, according to developer SimulaM, the whole thing is being developed in Unreal Engine 5.

There will be over 60 characters from the Bible featured in I Am Jesus Christ, including all of Christ's disciples. You'll even be able to recreate The Last Supper, which I've been told was a pretty awkward affair for all involved.

The full game won't be released until the first half of 2023, but developer SimulaM has announced I Am Jesus Christ will release a prologue version on December 1. The prologue will be a "short version of the game" that has the player "explore ancient Nazareth and the lifestyle of that time." Players will also be tempted by Satan and turn water into wine as Christ's first miracle.

The most recent developer blog noted that the prologue is sort of a beta test for the game, with players encouraged to provide feedback ahead of I Am Jesus Christ's eventual release. There will also be a Story Mode added in the Prologue, allowing non-gamers an easier time of experiencing life as Jesus. I'm honestly not sure where the challenge was going to come from, unless defeating Satan turns out to be far more mechanically intensive than Christ's regular miracles, but good on SimulaM for thinking of accessibility.