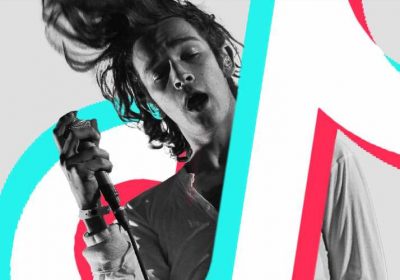 I hate myself for simping over Matt Healy. The 1975 frontman comes across as a total douchebag during interviews, overanalytical in the band’s lyrical substance when much of it comes down to sex, drugs, and having a good time. But since the days of their debut we’ve seen an increased sincerity, and willingness to grow up and pursue more authentic artistic efforts that don’t have me rolling my eyes. I still love their music, and their latest album is filled with bangers, but it’s the explosion of Healy content on TikTok that really hooked me.

The band is busy touring the US right now, which means my feed is filled with several videos documenting the same moments from different angles with alternate commentary. It’s been incredible, and a rather unorthodox manner of absorbing a show and the chemistry that comes with it. I would normally avoid watching snippets of live music on Twitter or Facebook, but TikTok is able to provide an integral context and playful execution that makes indulging in them so damn fun, and the algorithm is scarily accurate at picking which sound effects and subject matter will keep me scrolling well past my bedtime.

Live performances make use of autotune, and given the frequency of interacting with the crowd and talking general amounts of random shit, this means much more than lyrics are passed through the microphone. One moment has Healy standing atop the roof of a set, stopping in the midst of a song to say, ‘Someone’s fallen down over there, go and fucking sort them out and stop standing around like a bunch of dickheads,’ which is normally a good thing for a vocalist to do, but coming through autotune makes it the funniest thing ever. So TikTok has of course turned it into a piece of audio that has already been spliced into countless memes across the community. The whole thing is oddly wholesome.

Another clip has Healy playfully asking fans not to throw menthol cigarettes onto the stage because he doesn’t like them, and this random request is combined with a funny little dance and continued autotune in the midst of a song that even listening to it is fun, let alone figuring out how to turn it into a meme. He even apologises to fans who bought shit seats positioned behind the stage, but assures all the unlucky patrons that he loves them anyway.

There is more than a band on stage here, there’s a cheeky, enjoyable, communal presence that has spread online faster than I could have imagined. Some fans were even invited on stage during the song Robbers to share a slow dance with Healy, and cutely enough this wasn’t limited to gender or used as an excuse to get someone attractive on stage, it felt authentic.

He goes a little too far during a scripted sequence where the camera is lowered down to his crotch, but it’s pulled off with a knowing levity that fits in with the rest of the show. Social media, and TikTok especially, tend to hyperfixate on specific celebrities. Taylor Swift was everywhere before and following Midnights, and now Matt Healy has absorbed all the attention for a solid fortnight. Harry Styles still pops up sometimes too.

Not that I’m complaining, the energy is downright immaculate. Even a few behind-the-scenes snippets of fans meeting him on the street before a show or during autograph signings seem imbued with a warmth that so many other stars fail to exude. I was pretty out of touch with pop music before TikTok, but the platform has reignited my love for The 1975, made me support Harry Styles, and turned me into the Swiftie I was always destined to be.

I could definitely be spending my time doing more productive things, but these autotune compilations keep pulling me back in.