Kelly Chambers Has Her Mass Effect 3 Design In Both Games Now, Fans Divided 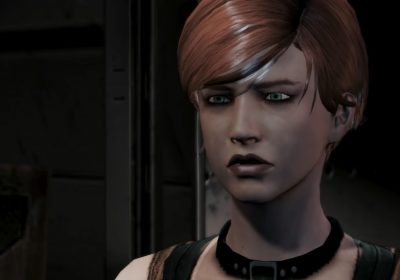 Between Mass Effect 2 and 3, yeomen Kelly Chambers became almost unrecognisable. Due to character textures not transferring over to the sequel properly, her face ended up looking a whole lot different, completely unintentionally.

Nine years later, Mass Effect Legendary Edition gave developers the chance to unify the two designs, and create some coherency across the trilogy. And that they did – just maybe not in the direction fans were hoping for.

As spotted by Redditor FanEu953, Kelly now makes her debut in the second game with her altered Mass Effect 3 face. The change is quite dramatic, the most notable difference being her hair, which is in a completely different style. It’s also in a darker shade, closer matching femshep’s auburn locks than Kelly’s own ginger roots. On top of that, almost every part of her face is different, with changes to the mouth, nose and eyes very evident.

As fans highlight in the replies, the difference is likely due to the first two games in the trilogy being upgraded using Mass Effect 3’s assets. To keep Kelly looking the way she did originally, this may have meant giving her a unique build, rather than using generic NPC assets. The developers may have decided against spending time on this, considering Kelly is not a companion. This wouldn’t be anything new, as the Normandy’s crew that don’t join Shepard on missions have always seen appearance changes (such as Dr. Chakwas), yet none are more dramatic than Kelly’s.

Not all changes made to the trilogy have been poorly received however. Many fans were actually pleased to see that Tali got a new face, with the portrait you’re gifted of her for completing her romance looking completely different. The maskless Tali picture you received in Mass Effect 3 proved controversial at the time, as it was actually a photoshopped stock image. In the remastered trilogy, the image is now a unique mock-up of what a quarian would look like outside of their enviro-suits.

Mass Effect Legendary Edition released May 14, and is available for PS4, Xbox One and PC.