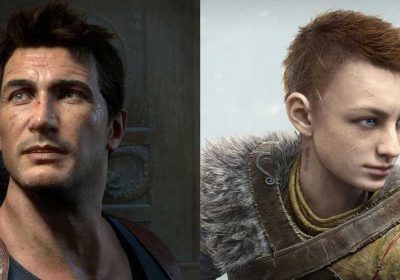 We talk a lot about how most video game heroes are a bunch of variations on the same character: straight, white, male, dark hair, and/or bearded. And, it's a fair point; among Sony's crop of PS4/PS5 leads, Joel, Deacon St. John, Nathan Drake, Jin Sakai, Kratos, and Peter Parker fit a majority of those descriptors. But, while playing God of War Ragnarok last night, something Kratos said drove home how different he is from the rest of the stable of action game leads.

While riding a minecart, Kratos, Atreus, and Mimir are attacked by a barrage of grims, the low-level frog-like enemies that are very common in the early game, bursting in the windows. Kratos bashes them out, until three attack at once. He falls to the floor, the brake, which Atreus has been fiddling with, breaks off in his hand, and the cart falls off the track and onto a cliff below, where Kratos is grabbed by a massive troll (which he defeats so easily it almost plays as a meta joke on how prevalent the big bastards were in the last game). As the track is breaking, Atreus yells out, “Shitshitshitshitshit!” The trio make it through the ensuing battle, but then Mimir addresses the outburst: “So… quite the mouth you had on the train, lad.”

Atreus starts to say that it’s just a word, that he's heard WAY worse from Brok, but Kratos cuts him off before he can finish the excuse. "The word does not matter," he says, "You lost control." It’s an interesting bit of characterization, in part, because it's a window into an aspect of parental duty that God of War hasn't really given us until now. Every parent has to decide (whether actively or passively) how they feel about swearing and what they think their kids should be allowed to say. And, if they don't care, they still have to teach their kids how to navigate the teachers, parents, and other kids who will. 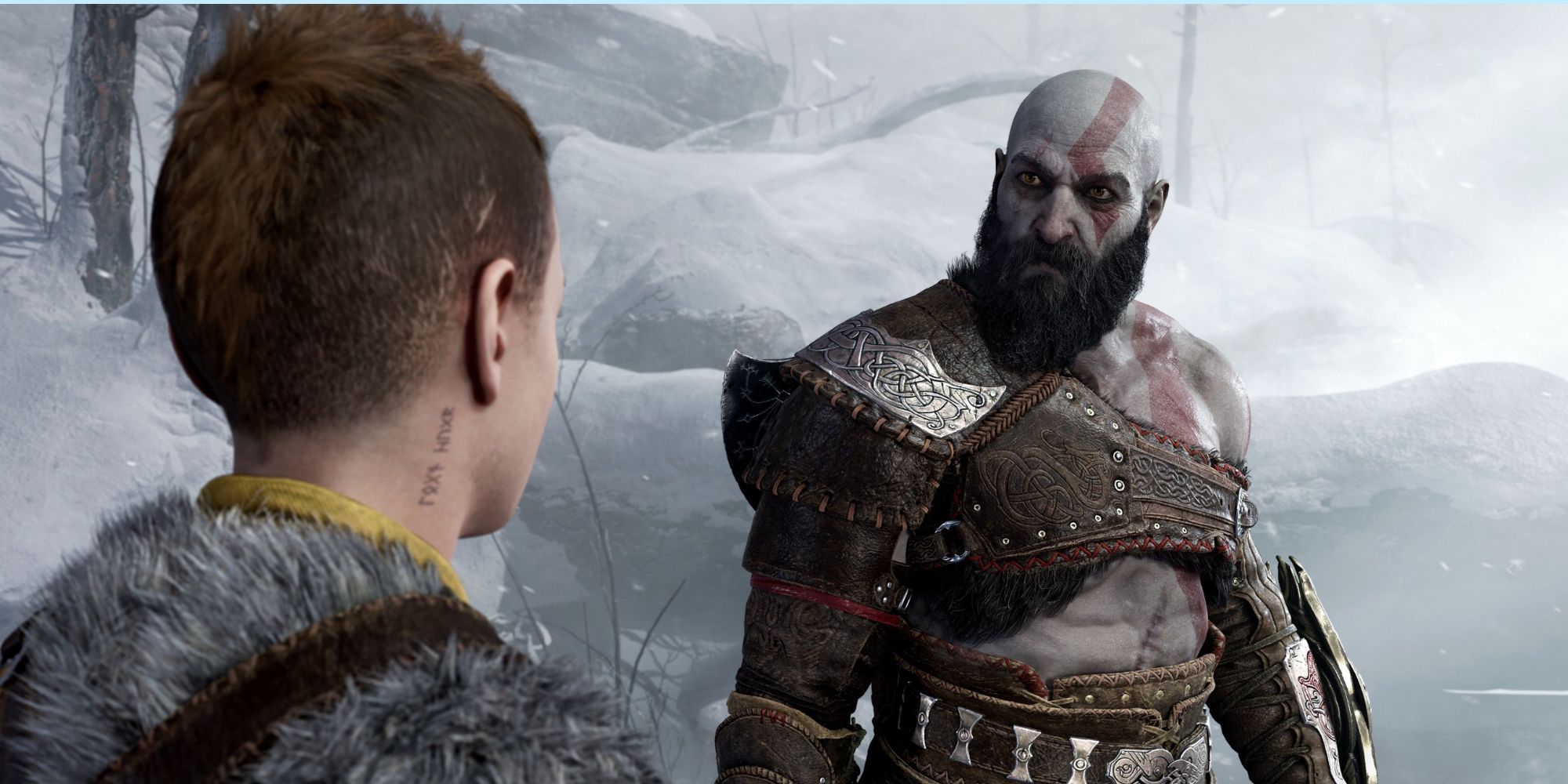 When Atreus let the curses fly, I thought to myself, “Huh, I wonder how Kratos feels about swearing.” The Last of Us had an answer for Joel. He doesn’t care. Despite seeming to come from a Southern Christian background, Joel didn't seem to have the moralistic hang-ups that history might imply. Ellie drops a lot of F-bombs across both TLOU games and, while Joel criticizes her for plenty, he never tells her to watch her mouth.

So it’s interesting that Kratos, the ultraviolent, overbearing god of war has an opinion on bad language.

"We were falling. Through the air,” Atreus says. “I thought we were gonna die."

"Is that truly what you wish your last word to be?” Kratos asks.

"In moments of crisis, panic does nothing. Harness it. Let it serve you." 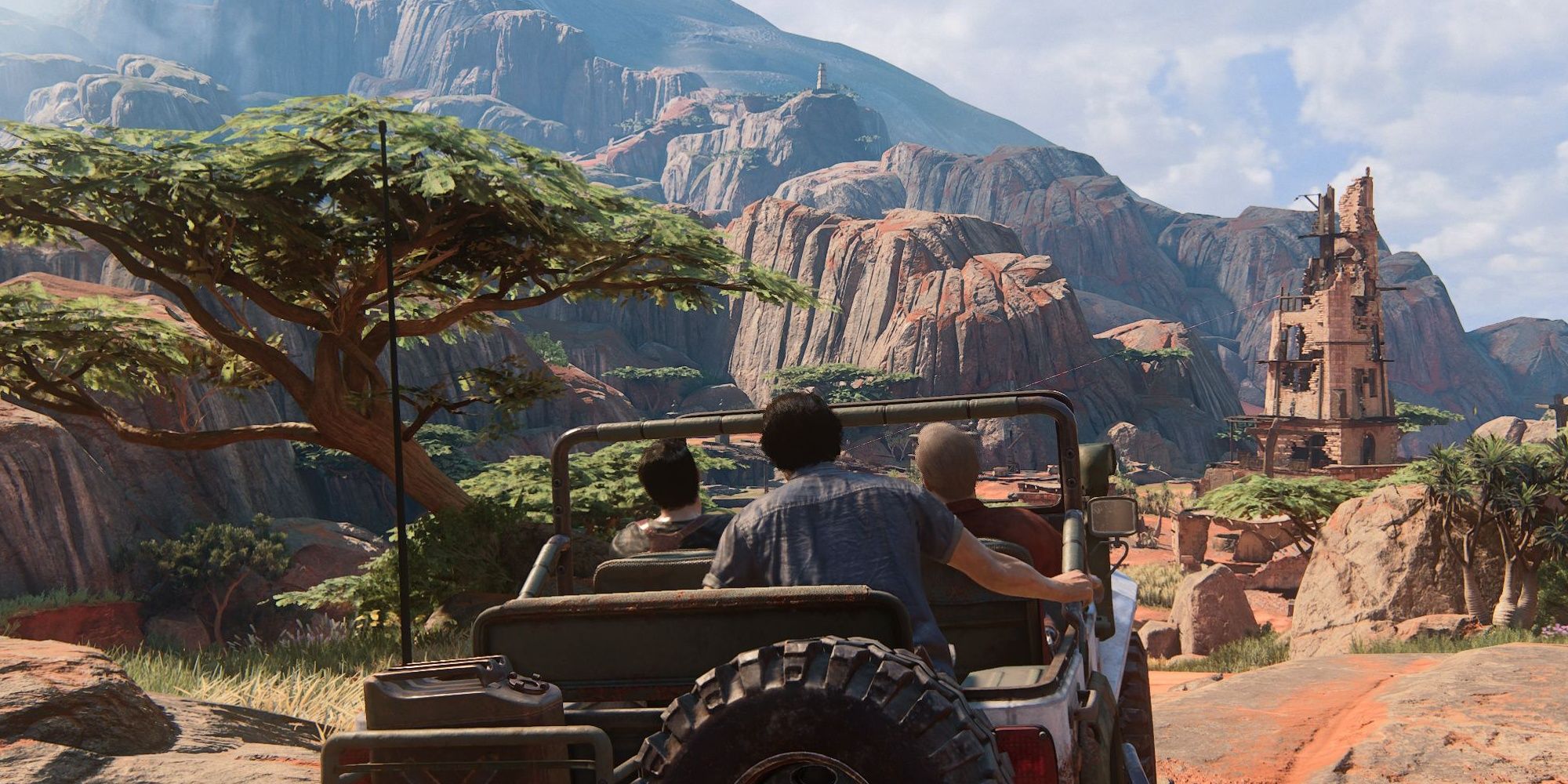 The trio emerge into Jarnsmida Pitmines, and the conversation ends. But, it’s a revealing insight into Kratos' psyche. Though the Ghost of Sparta is rarely forthcoming about his personal life, this is a fairly direct statement about his philosophy of what it means to be a man and a warrior. It also shows that Kratos has no patience for the devil may care attitude his Sony stablemate Nathan Drake exhibits throughout the Uncharted series. Nate has said the exact same thing as Atreus, many times, in similar situations. Whether he’s slipping off a rooftop, falling off a cliff, or hanging on for dear life as an ocean liner capsizes, his most common exclamation, like Atreus, is “Shitshitshitshitshit!”

Nathan Drake gives the impression that he is barely surviving his adventures and that, if he does, it’s sheerly through dumb luck. He’s good at what he does, but he so often finds himself in situations that he isn’t prepared for, that luck is really all he has. Still, he doesn’t sweat it, and that laissez faire attitude is anathema to Kratos. If his son survives their adventures, he doesn’t want it to be because of luck. He wants it to be because they spent years training and preparing for every eventuality.

It’s admirable, in a way. Just not as much fun.