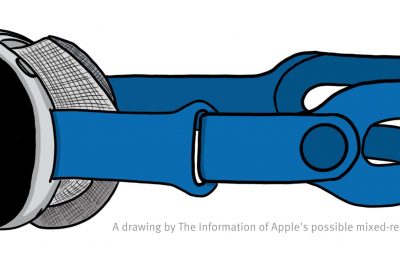 Apple’s rumored upcoming headset will have MacBook level performance and dual 4K OLED microdisplays, according to a note from Ming-Chi Kuo MacRumors claims to have viewed.

Kuo is a TF International Securities analyst known for predicting Apple products & moves over a year in advance using his supply chain sources. Apple Track gives him a 76% accuracy rating.

The Information, Bloomberg and analyst Ming-Chi Kuo all claim Apple will release a headset as early as 2022 with high resolution color cameras for mixed reality. Kuo previously claimed it will be priced at least $1000. In February The Information claimed to have viewed images of a late-stage prototype “which show a sleek, curved visor attached to the face by a mesh material and swappable headbands”. The outlet drew an impression:

Kuo’s new note apparently claims the headset will have a new chip with “similar computing power as the M1 for Mac”. M1 is Apple’s first in-house PC processor, the first in a line intended to transition its Mac products from the x86 architecture that has dominated PCs for two decades to the ARM architecture used in smartphones & tablets.

We’re somewhat skeptical of this claim. M1 is a fairly large chip. While its power efficiency is incredibly impressive for a laptop or PC, it draws much more power than the smartphone-tier processors used in existing headsets like Quest 2. That’s why Apple uses its lower power A-series chips in even its most advanced iPhones.

On the other hand, M1 was launched in 2020 and is manufactured using TSMC’s 5 nm node process. TSMC usually moves to a smaller node every two years, bringing with it significant performance per watt improvements. If TSMC successfully mass produces 3 nm chips by the end of 2022, it’s possible Apple’s headset could indeed deliver M1 level performance at VR headset power consumption levels. But that’s a big if, as TSMC recently cautioned investors about potential delays to 3 nm.

The Kuo note also apparently claims the headset will have dual 4K micro OLED displays. OLED microdisplays are significantly smaller than regular displays, so when paired with the right lenses can enable an extremely compact design such as Panasonic’s concept, but aren’t yet used in shipping products.

If Kuo’s claims are true, Apple’s headset will offer significantly better performance and visual quality than current headsets in a much more compact design. But bleeding edge processors and microdisplays aren’t cheap, so it may end up competing with Project Cambria, Meta’s upcoming take on a high end headset, rather than Quest 2.