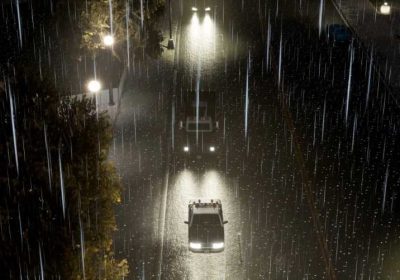 Grand Theft Auto: The Trilogy – The Definitive Edition's ridiculously long title might have been forgiven had the collection of remasters been good. Unfortunately for Rockstar, that was not the case. The Trilogy had a number of issues at launch and the studio responsible for it is currently busy trying to fix them. More than 100 fixes have been rolled out via patches so far, but there's still a long way to go.

Rockstar appears to be tackling the issues that have been making the most headlines first which only makes sense. One revelation that became clear within days of The Trilogy's launch was that the game becomes almost unplayable in heavy rain. Some missions trigger that weather, and trying to complete them during a downpour is almost impossible. Thankfully, this week's patch, the biggest yet since The Trilogy launched, appears to have fixed that problem.

A screenshot posted by gloriousgoy on Reddit, which you can check out below, shows the rain no longer obscures your view when it falls. The reaction to the screenshot has been predictably positive apart from one comment from a player claiming they miss the heavy rain. There's always one. The patch has also fixed a bug that caused rain to fall inside of buildings during cutscenes.

The Trilogy's weather has been a major issue during its first few weeks, and a lot of Rockstar's focus on fixes has revolved around fixing it. Not only the rain, but also the fog, or lack of it. The original San Andreas featured a fog effect that made the map feel a lot bigger than it actually is, which is still pretty big. The removal of that effect in the remastered version makes San Andreas look like a model village from the sky or high points on the map, so not ideal.

The same patch that fixed the rain this week has also fixed the fog. While the old effect hasn't been restored, San Andreas can now be covered in a layer of clouds when looking at it from above. You'll need to turn the fog effect, labeled ground haze, on in the game's menu to make the change.