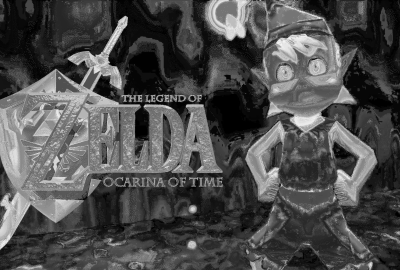 Modder BrianMP16 has created an amazing VR mod for Nintendo classic, The Legend of Zelda: The Ocarina of Time.

You can see gameplay we recorded from the mod below. Running inside the DolphinVR emulator, it builds on top of the existing first-person mod for the immortal N64 adventure, letting you experience almost the full thing (save cutscenes etc) from Link’s perspective. It’s still played with a controller, but it’s a pretty interesting take on the game.

The Legend Of Zelda: Ocarina Of Time VR Mod Gameplay

Take note the gameplay above has a few changes to the mod instructions to get it running somewhat smoother, though you’ll still notice some regular performance hiccups. If you want to try the Zelda VR mod out for yourself you can visit the developer’s Discord where you’ll find all the necessary instructions.

You probably also noticed that Link’s own movements don’t translate too well to VR and there are some other issues throughout, but it’s a pretty amazing mod all the same.

It’s also not the only way to experience the world of Zelda in VR. Nintendo itself implemented support for its cardboard Labo headset into The Legend of Zelda: Breath of the Wild on Nintendo Switch a few years back, though that support is arguably even more troubled than this fan-made mod. Hopefully one day we’ll get to experience a full Zelda game in VR with official support.

Are you going to be checking out The Legend of Zelda: The Ocarina of Time VR mod? Let us know in the comments below!