LEGO Star Wars: The Skywalker Saga: All Minikits In Every Episode 2 Level 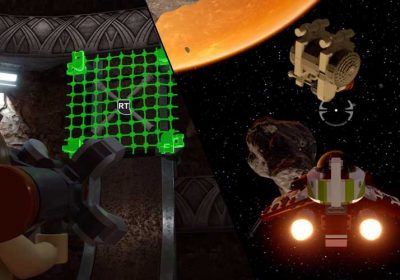 With the completion of The Phantom Menace section of LEGO Star Wars: The Skywalker Saga, players will unlock the Attack Of The Clones section of the game. And, naturally, with it comes a whole boatload of new Minikit pieces to collect.

You will encounter these pieces while chasing a would-be assassin, while battling the shadowy Count Dooku, and while playing hide-and-seek in a cluster of asteroids. Some of these will be a little devious. But worry not, all the locations of every Minikit are detailed below for your convenience.

A Wrestle With Wesell

A quick word of warning, collecting the Minikits in this mission is going to be a whole lot easier if you have the collectible detector perk upgraded. It is still perfectly doable without it, it is just something that will make your life a little easier.

While chasing after Wesell, you will see a ship carrying cargo floating in the sky above you, shoot this down and you will earn the "Fresh Off the Van" Minikit piece. Keep an eye on the electrified power generators, the final pair of the bunch has a Minikit piece wedged between them: fly into it to obtain the "Maybe Just One More Time" Minikit piece.

The last batch is all found in the city section (which follows the tunnel section). Just blow up every sign and every hologram that you see. The "Advertising Overload" Minikit piece will be gained by destroying ten advertisements (it doesn't matter which), the "Shiny Hologram Edition" Minikit piece is obtained by blowing up three hologram Minikit pieces, and the "Instant Delivery" piece is hidden in a giant hologram of a Minikit. Once again, with the collectible detector perk upgraded, this section will be easier. However, don't worry about "missing" any of the objects here. They will cycle endlessly. Just make sure you don't kill Wesell before obtaining all three of these Minikit pieces.

The Hunt For Jango

Instead of going looking for Jango, let him hide and start this mission by destroying all five satellites located in the surrounding area. Doing so will earn you the "No Reception" Minikit piece. While you are hunting down the different satellites, look for a large Minikit-shaped object. Destroying it will earn you the "Mini-Comet" Minikit piece. There is another Minikit hidden in a cluster of asteroids near one of the satellites. So, as long as you are clearing the asteroid alongside the satellites, you will encounter the "I Wanna Rock" Minikit piece as a matter of course.

When you are on the first conveyor belt (with Anakin and Amadala) jump onto the first giant press. From there, you will see the first Minikit piece hovering in the air. Jump into it and you will obtain the "Conveyor Belt Backtrack" Minikit piece.

The next conveyor belt (immediately after the first one) has another Minikit. Just run against the belt and you will reach a ladder. You will need a bounty hunter to get past the golden obstruction on the ladder. Once you clear the ladder, climb up and you will obtain the "Smuggler Juggler" Minikit piece. When you take control of R2-D2 and C-3PO again, you will eventually encounter a robot arm painting a portrait. Destroy the portrait and the robot arm. You will be able to assemble the pieces left behind into the "Art Critic" Minikit part.

Nearing the end of the level, as you are on a conveyor belt that is assembling droids, look up to see the "Factory Sample" Minikit dangling on the assembly line above. Shoot the light on the hook holding it, and then shoot the target that appears. If you don't see a green light on it, then you are facing the wrong side of it.

The final piece is located in the end section. Instead of pulling the levers that would complete the stage, jump down onto the cart filled with junk. Take it until you see a section that is blocked by a silver barricade. Blow the silver barricade up using a villain unit. Then, you will need to yank the Minikit out of the hands of a giant droid using either a hero character or an astromech droid. You will now have the "Fancy Fan Fix-Up" Minikit piece.

This stage is very similar to the Gungan stage from Episode 1 in that all the Minikit Pieces are easily located, but almost all of them require that you obtain them in the free-play mode. However, you can go around destroying sandcastles to earn the "Big Bully" Minikit piece in the story mode.

Now, once you complete the stage in the story mode, reenter in the free-play mode, and use a villain-class character to blow up the silver box. Then, shoot the five targets that appear around the arena. Once you do so, you will be rewarded with the "Turret Target Tasks" Minikit piece. Next, use the villain unit to explode the silver cage door. You will then acquire the "Fancy Door, Fancy Reward" Minikit piece.

Now, go find the giant gate. You will need an astromech droid to open this one. Once you do you will obtain the "Gate Expectations" Minikit. Another door can only be broken down using the Breaker Blaster of a scavenger character. This means that you will have to have played through Rey's section in Episode 7 in order to open it up (as you don't get the scavenger's tools until you do so). Once you break the door down, you will obtain the "Out of Sight, Out of Mind" Minikit piece.

The Battle of the Jedi

The only Minikit piece obtainable in the story mode is found in Count Dooku's arena. Just break up all the objects wedged in the back corner of Dooku's hanger and you will find the "Lost and Found" Minikit piece. Every other Minikit piece will be obtained in the free-play mode.

Returning to the stage in free-play mode, use the scavenger's web gun in the first section in order to climb up and claim the "Scavenger Hunt" Minikit piece. Much like the Breaker Blaster, the netgun is obtained by completing Rey's tutorial section in Episode 7. Next, you will see a golden structure on the wall. This calls for a bounty hunter-type character. Once you blow up the golden object, you will be rewarded with the "Gold Digger" Minikit piece. Entering into the dark corridor, you will find a cracked wall that can be broken open using the scavenger's Breaker Blaster tool. Doing so will net you the "Cave Dweller" Minikit piece.

Lastly, when in the final area of the stage, where you fight Count Dooku, use a villain class character to open the locked door. This will spawn four Geonosian enemies. Destroy them and you will obtain the "Bug Repellent" Minikit piece. With that, you will have obtained the final Minikit piece in episode 2.