Home » News » Lies Of P Is The Dark Souls Of Pinocchio

Lies Of P Is The Dark Souls Of Pinocchio 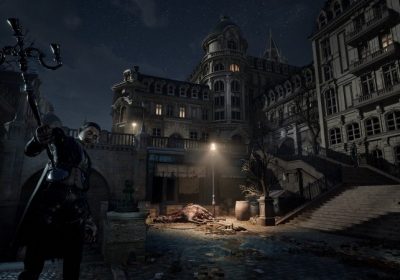 Announced with a stylish and undeniably intriguing trailer, Neowiz and Round8 studio are bringing a Souls-like Pinocchio experience to PlayStation 5, Xbox Series X, and PC. Truly, playing as Pinocchio in a souls-style game is only suited for such powerful platforms. First, check out the story trailer below to get a sense of the environments and style.

In Lies of P, you play as Pinocchio in a world where humanity has been lost. The cityscape around you has become a nightmare, and you must find Mr. Geppetto to unravel the world’s mysteries. A Disney take on Carlo Collodi’s famous novel, this is not.

“We’ve been toying with the idea of retelling Pinocchio’s tale in our own way for some time. Lies of P is the culmination of our dreams and our nightmares. It’s definitely a version of this classic story that you’ve never seen before,” said Jiwon Choi, development director for Lies of P. “To us, Pinocchio has always been a grimly dark tale of the lies we tell to get by in a world that’s not always black and white. We can’t wait to show you more of the game in the coming months.”

In Souls-like fashion, you will take on terrifying opponents and explore a dark world inspired by the Belle Époque Era, showcasing a collapsed city that was once prosperous and vibrant. Here’s something you may not expect. Because you’re playing as Pinocchio, one of the core concepts in the game is to lie. Depending on the lies you tell over the course of the game, the ending will differ.

While we don’t know too much as to how combat and mechanics are going to play out at this time, there is a weapon crafting system that allows players to combine weapons with one another to create new ones. There are also skill systems that tap into the fact that Pinocchio is a doll, allowing him to swap out parts of his body to gain new features and abilities.

Are you interested in this tale of darkness, lies, and deception? Are you excited to play as a puppet mechanoid that will do anything to become human? Let us know in the comments!