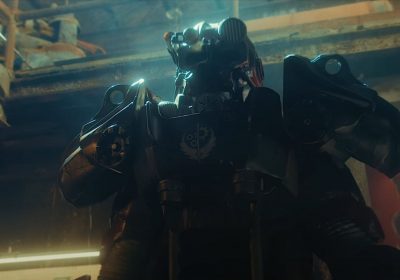 Fallout 76 may have had a rough launch, but most fans agree that it's finally in a pretty good place. Technically glitches have been solved, enormous amounts of content have been added, and if you want to experience the depressing wasteland of a post-nuclear apocalypse America, then Fallout 76 isn't a bad way to do it.

But even before Fallout 76 got to where it is today, there were die-hard fans exploring the Appalachian wastes with friends, writing their own stories for where Bethesda left narrative gaps big enough to park a suit of power armor. One of those was Brian Curtin, also known as Infectious Designer on YouTube. Specializing in short-form videos with enormous production value, Curtin and company recently did a fan live-action trailer for Fallout 76 that left Bethesda "speechless."

The trailer starts off with some incredible costumes and set designs, showcasing various Fallout factions like the Brotherhood of Steel, the NCR, and even random survivors of the wasteland. Then the plot takes a turn to the Brotherhood where they find a Deathclaw egg in a cavern that's apparently got a live Deathclaw inside. The trailer ends with two Brotherhood soldiers and one power-armored traveler with a Gatling gun ready to take on a mutated beast.

"For the bloodied wanderers who found beautify in a broken world," writes Infectious Designer at the end of the video, "and those with the unyielding belief to build it."

Of special note is the combination of practical and CG effects which are on par with anything I've seen out of Disney and HBO. And that Deathclaw even has a credit in the video description, implying that it was at least partially someone in a suit.

If Amazon's Fallout show even looks half as good as this trailer, we're in for a real treat. So far, we've only seen a single still image from the coming Fallout TV series, so it's a little hard to judge, but I've got my hopes up after seeing what a Fallout show could look like.